Comments (0)
Add to wishlistDelete from wishlist
Cite this document
Summary
This is done by Medicare and Medicaid services centre, which deal with the monitoring of the expenditures incurred. These are the…
Download full paperFile format: .doc, available for editing
HIDE THIS PAPERGRAB THE BEST PAPER96.3% of users find it useful 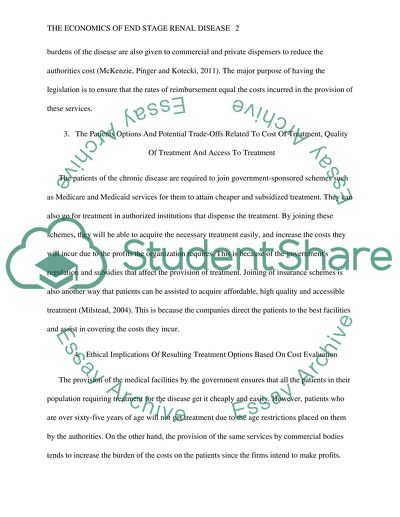 Extract of sample "The economics of End Stage Renal Disease"

Task The Major Reimbursement Mechanisms Presented In the Case Study The government implements the legislation of the year 2003 that concerns itself with reimbursement of funds to patients of chronic renal disease. This is done by Medicare and Medicaid services centre, which deal with the monitoring of the expenditures incurred. These are the expenditures incurred while treating the disease since the government tends to use more money while covering less members of the population. The rise in costs occurs due to the rise in prices of drugs, technology, an aging population and hypertension. The strategy of shifting costs has enabled the government to control the costs they incur by revision of the delay of treatment services to patients who are not covered by the medical scheme (Kovner, Knickman and Weisfield, 2011).
2. The Economics of Providing ESRD Treatment from the Organization’s Point Of View
An organization providing ESRD treatment is likely to increase their earnings before deducting the interest they attract on borrowed finances, taxation, depreciations and amortization. With the control of the CMS, it intends to exert on achieving a breakdown of the costs, the organizations will tend to suffer losses. The eventual close down of the service providers will come as a result along with a decline of the quality they dispense. The financial burdens of the disease are also given to commercial and private dispensers to reduce the authorities cost (McKenzie, Pinger and Kotecki, 2011). The major purpose of having the legislation is to ensure that the rates of reimbursement equal the costs incurred in the provision of these services.
3. The Patients Options And Potential Trade-Offs Related To Cost Of Treatment, Quality Of Treatment And Access To Treatment
The patients of the chronic disease are required to join government-sponsored schemes such as Medicare and Medicaid services for them to attain cheaper and subsidized treatment. They can also go for treatment in authorized institutions that dispense the treatment. By joining these schemes, they will be able to acquire the necessary treatment easily, and increase the costs they will incur due to the profits the organization requires. This is because of the governments regulation and subsidies that affect the provision of treatment. Joining of insurance schemes is also another way that patients can be assisted to acquire affordable, high quality and accessible treatment (Milstead, 2004). This is because the companies direct the patients to the best facilities and assist in covering the costs they incur.
4. Ethical Implications Of Resulting Treatment Options Based On Cost Evaluation
The provision of the medical facilities by the government ensures that all the patients in their population requiring treatment for the disease get it cheaply and easily. However, patients who are over sixty-five years of age will not get treatment due to the age restrictions placed on them by the authorities. On the other hand, the provision of the same services by commercial bodies tends to increase the burden of the costs on the patients since the firms intend to make profits. This situation also arises when the services are provided by insurance companies in addition to the complex and long process of justifying one’s claims (Milstead, 2004).
5. Summary
The provision of the medical services should be controlled by the government to ensure that treatment is affordable and easily accessible across various classes and age groups within the population (Kovner, Knickman and Weisfield, 2011). This will ensure the control and monitoring of the medical conditions across the country.
The process of gathering information from patients greatly depends on their educational levels, understanding and explanations of the health problems they encounter. My current organization handles patient records electronically because it makes the data easily available to many interested parties spread out across different areas. The records are easily available to any authorized personnel within the organization from systems using passwords and user names. The patients tend to benefit from the close monitoring and easy diagnosis of complications they might encounter when they experience various ailments.

CHECK THESE SAMPLES OF The economics of End Stage Renal Disease

The Effect of Diet and Exercise on End Stage Renal Disease

...assignment is due Nutritional restrictions are proved to be helpful in end stage renal disease. Keeping normal weight and serum proteins is essential as far renal patients are concerned. Diet restriction would also help them avoid cardiovascular problems. Protein requirements are found to be higher in patients with end stage renal disease. This is because of the losses that happen in the process of dialysis. There is a recommended level of dietary protein intake for renal patients. This intake is based on their body weight. Half of the dietary protein of their diet...
8 Pages(2000 words)Research Paper

.... Murray was awarded the Nobel Prize for Physiology or Medicine in 1990 for successful renal transplantation. Today, renal transplantation has improved drastically due to advancements in the procedures of effective immunosuppression, evolution of human leukocyte antigen (HLA) typing, cross-matching and modern techniques for organ preservation. Such medical developments have improved both patient and graft survival after renal replacement therapy. Patients with end-stage renal failure in the 21st century have the option of renal transplant as an optimum treatment. (Torpey, 2010). Benefits of Renal...
6 Pages(1500 words)Research Paper

...End Stage Renal Disease Also, known as Chronic Renal Disease, it occurs when renal fails to perform their role for a long period of time. My main aim in this paper is to state what is ought to take place in the absence of the disease, normal function in the health state, explain what happens in the presences of the disease or what I would like to call abnormal state, state and explain the most potential treatment of the disease, and finally I will look at its effect to the on the heart and lungs, and the social impacts of the disease to its victims and...
5 Pages(1250 words)Assignment

...Essay 2 – Renal (Human Physiology and Anatomy) Introduction: The kidneys represent important organs in the body of human beings. It has the responsibility of urine preparation, thereby allowing toxic substances and water to get removed from the body. Thus the primary roles of kidneys in the body include removal of metabolic products and deadly substances from the body, upholding the concentration of electrolyte in the body, and taking the responsibility of circulation and formation of blood with the production of substances of renin and erythropoietin that are hormone like products in the body (Faller et al, 2004, p.442). The present study focuses on the various functions of kidney, the anatomy of the organ, as well as...
8 Pages(2000 words)Essay

...the cortex and the nephrons span the length of the cortex and the medulla (Rosdahl and Kowalski, 2008). Initially, the renal corpuscle is the first filtering area of the nephron. Nephrons are the primary functioning parts of the kidney. Their main function is to manage the consistency of water as well as other soluble elements through the process of filtration (Rosdahl and Kowalski, 2008). Reabsorption occurs and helps ensure that essential elements would be returned to the system and the rest would be eliminated in the urine. The nephrons are elongated tubular structures with one end being closed and folded like cups (Encyclopaedia Britannica, n.d). Such structure is known as the Bowman’s capsule which...
9 Pages(2250 words)Essay

...End-Stage Renal Disease Affiliation: What resources would a health information consultant find helpful in consulting for ESRD facilities? Explain why you have selected those resources and how they would benefit the facility and the patients. End Stage Renal Disease patients require and have several facilities which are meant to ensure that they are comfortable and get the required treatment to prolong their lives despite their disease (Cosgrove 2011). One of these facilities is the dialysis facility which deals with removing the metabolic and water from the patient’s kidney through diffusion and passing it through the dialysis machine. This facility has several resources which may be useful to a health information consultant. One... it would...
1 Pages(250 words)Research Paper

... have to deal with. Increase in healthcare funding by the government is a welcome move to patients, but on the other hand taxpayers air their concern on increased government expenditure. Allocations to Medicare, Medicaid, and related programs direct substantial budget amounts to ESRD program (Sullivan 49). The need to balance these concerns for all the involved stakeholders often results in ethical implications. Each stakeholder strives to undertake socially acceptable practices. Works Cited Sullivan, John. “End Stage Renal Disease Economics and the Balance of Treatment Modalities”. J. Service Science & Management, 2010, 3: 45-50.... End Stage Renal Disease Provision of...
2 Pages(500 words)Essay

...End Stage Renal Disease Economics End Stage Renal Disease Economics Introduction The Federal Government of the United s initiated health care transformation for patients that suffered renal failure. According to Sullivan, the Medicare Part B made facilitated the initiatives that every American citizen to be entitled to the medical coverage after a given period and without discrimination on age (D., 2010). The ESRD program has been appreciated in several occasions as a success story and earning significant criticism for creating high tax burden with...
4 Pages(1000 words)Coursework

Management of the End-Stage Kidney Disease

...and then dialysis is done to remove the excess toxic waste and fluid from the body. The complication that is associated with ESKD are hyperkalemia, bone disease, anaemia and pericardial effusion. It is, therefore, imperative to manage and monitor the patient carefully while in the hospital and after discharge. List of reference Brown, E.A. & Johansson, L., 2011. Epidemiology and management of end-stage renal disease in the elderly. Nature Reviews Nephrology, 7, pp.591–598.  Crawford, P.W. & Lerma, E. V, 2008. Treatment options for end stage renal disease. Primary care, 35,...
5 Pages(1250 words)Essay
sponsored ads
Save Your Time for More Important Things
Let us write or edit the essay on your topic "The economics of End Stage Renal Disease" with a personal 20% discount.
GRAB THE BEST PAPER

Let us find you another Essay on topic The economics of End Stage Renal Disease for FREE!