Comments (0)
Add to wishlistDelete from wishlist
Cite this document
Summary
Despite the knowledge and skills to solve these issues, when it comes to coaching executives in particular, the task would definitely be a…
Download full paperFile format: .doc, available for editing
HIDE THIS PAPERGRAB THE BEST PAPER95.8% of users find it useful 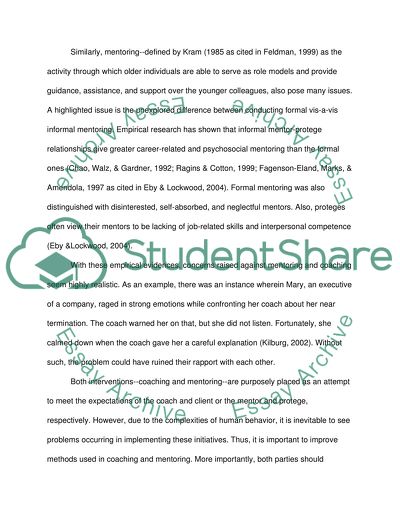 Negative Outcomes in Coaching and Mentoring Coaching--finding out issues as well as the attempt to solve the problems in an organization is an exciting work but a challenging one. Despite the knowledge and skills to solve these issues, when it comes to coaching executives in particular, the task would definitely be a painstaking task. For the coach, failing to give a plausible solution to issues and failing to meet expectations could cause a bad reputation, end of coaching contracts, as well as physical and emotional dilemma. Clients, on the other hand, once they fail in the coaching process, could lose their jobs, or worse, experience distress in their interpersonal relations as well as physically and emotionally (Kilburg, 2002).
The mentioned predicaments exist because of several major reasons involving both clients and coaches. Most of the time, clients show a reluctant pattern since they possess serious psychological and interpersonal problems, which are difficult to deal with. Next, they lack motivation and they fail to strictly adhere to the coaching procedures. Third, they impose unrealistic expectations on the coach as well as on the coaching process. Last is their failure to follow actively on homework and intervention suggestions. On the other hand, coaches could fail due to the lack of sympathy and expertise. Sometimes, they also tend to underestimate client’s problems or overestimate their ability to influence the client. They also overreact on the situation and choose to leave unresolved disputes. Poor technique is also a reason why coaches fail (Kilburg, 2002).
Similarly, mentoring--defined by Kram (1985 as cited in Feldman, 1999) as the activity through which older individuals are able to serve as role models and provide guidance, assistance, and support over the younger colleagues, also pose many issues. A highlighted issue is the unexplored difference between conducting formal vis-a-vis informal mentoring. Empirical research has shown that informal mentor-protege relationships give greater career-related and psychosocial mentoring than the formal ones (Chao, Walz, & Gardner, 1992; Ragins & Cotton, 1999; Fagenson-Eland, Marks, & Amendola, 1997 as cited in Eby & Lockwood, 2004). Formal mentoring was also distinguished with disinterested, self-absorbed, and neglectful mentors. Also, proteges often view their mentors to be lacking of job-related skills and interpersonal competence (Eby &Lockwood, 2004).
With these empirical evidences, concerns raised against mentoring and coaching seem highly realistic. As an example, there was an instance wherein Mary, an executive of a company, raged in strong emotions while confronting her coach about her near termination. The coach warned her on that, but she did not listen. Fortunately, she calmed down when the coach gave her a careful explanation (Kilburg, 2002). Without such, the problem could have ruined their rapport with each other.
Both interventions--coaching and mentoring--are purposely placed as an attempt to meet the expectations of the coach and client or the mentor and protege, respectively. However, due to the complexities of human behavior, it is inevitable to see problems occurring in implementing these initiatives. Thus, it is important to improve methods used in coaching and mentoring. More importantly, both parties should constantly examine themselves whether they are still aligned with the mentoring/coaching objectives so that together, they could create better and harmonious solutions to the issues they are facing.
References
Kilburg, R. (2002). The taboo topic in executive coaching. In C. Fitzgerald & J. G.
Berger (Eds.), 13 failure and negative outcomes from executive coaching.
Davies-Black Publishing.
Feldman, D. (1999). Toxic mentors or toxic proteges? A critical re-examination of
dysfunctional mentoring. Human Resource management Review, 9 (3), 247-278.
Eby, L.T., & Lockwood, A. (2004). Proteges and mentors’ reactions to participating in
formal mentoring programs: A qualitative investigation. Journal of Vocational
Behavior, 67, 441-458. Read More
Share:
Tags
Cite this document
(“Failure/Negative Outcomes of Coaching/Mentoring Coursework”, n.d.)
Failure/Negative Outcomes of Coaching/Mentoring Coursework. Retrieved from https://studentshare.org/miscellaneous/1587712-failurenegative-outcomes-of-coachingmentoring

CHECK THESE SAMPLES OF Failure/Negative Outcomes of Coaching/Mentoring

...?Introduction I chose the topic of coaching and mentoring, because nursing education does not entirely rely on room education to serve its learning needs. Nursing interns and practitioners altogether need coaching and mentoring that will aid their professional development. Their professional development, in turn, can improve the quality of different health care variables, such as nurse and patient satisfaction. This paper seeks to understand coaching and mentoring theory and practices in nursing by providing an annotated bibliography for eight peer-reviewed articles. The main research question that guided the selection of journal articles...
11 Pages(2750 words)Annotated Bibliography

...? Leadership, Coaching and Mentoring Scrapbook BY YOU YOUR SCHOOL INFO HERE HERE Leadership, Coaching and Mentoring Scrapbook Entry The concept of leadership gives the student an opportunity to understand how best to guide and direct others in the organisation. Outside of management principles which include controlling, planning and organising, leadership theory provides students with real-life guidance for better loyalty development and followership. This is why keeping a leadership scrapbook is so important. It allows the student to look back on their understanding of leadership theory and also how it might influence followers by first examining oneself. It serves as a...
10 Pages(2500 words)Essay

...people’s interests and support the attainment of such potentials. A mentor should aspire to attain personal excellence through such interactions. To have this, a mentor should have good communication skills to facilitate understanding and to be able to communicate objectives to foster or influence the mentee towards attainments of their goals. Good communication skills were also an appropriate tool in fostering negotiations that impact positively to the mentoring and coaching process. Other attributes that the respondents elicited that contribute to positive outcome in the mentoring and coaching process included need...
3 Pages(750 words)Essay

...and apprehension over the company's future can hinder productive work outputs. 2.2 Defining 'survivor syndrome' and negative outcomes Once senior leadership has determined a strategic direction for a business, in which the policy indicates the need to reduce the organisational workforce, displaced employees are forced to exit the company and pursue other career opportunities. Survivor syndrome, in its best definition, involves the challenges and emotional turmoil experienced by the employees who remain with the organisation; and this 'syndrome' maintains the potential to radically affect the future direction of the firm depending on the severity of survivor attitudes after downsizing initiatives have...
20 Pages(5000 words)Essay

... perceptions on strengths and weaknesses capitalizes on an executives established talent and social/professional network. Examining strengths and weaknesses provides insights into the habits of the executives business interactions, as most people tend to repeat the patterns of behavior that come most easily to them, leading to both positive and negative outcomes. This repetition is the basis for defining ones style and exploring whether there is a need for more flexibility in approach. For example, an outgoing and verbally fluent executive may be coached to deliberately hold back in discussions to allow less articulate counterparts to expound on their viewpoints. The second perspective focuses on the interpersonal interactions... Running...
12 Pages(3000 words)Essay

...39% below the per value. The price was further devastated by the managements denial of any responsibility for the oil spillage. Internal and external friction between the company management and shareholders stem from the possibility of BP.s take-over by another company, high liabilities, poor public image and drop at the share price of the business (Simpfendorfer 2013, p.7). The friction questions the management style of the business. Great leadership seeks to address the frictions in a prudent and professional way. Mr. Hayward has not addressed the conflict and he has continued to express the company’s commitment to Russian investment. Failure to directly address the agency conflicts within the business, the leadership...
8 Pages(2000 words)Essay

Developing coaching and mentoring within organisations

...1 Emmanuel Thomas 5 Developing Coaching and Mentoring 2 Introduction Coaching and Mentoring are indelible hallmarks that serve to be great assets to any professional organization. In the long run, coaching and mentoring is highly beneficial not only to the ‘mentee’ but also to the mentor and the organization at large. Such useful and wholistic programs are developed and conducted by professionals who help novices in the field, to learn and inculcate new skills, by giving them a sense of direction, while keeping in mind the goals and objectives of the organization. In this study, an attempt is being made to examine the...
6 Pages(1500 words)Essay

Coaching and Mentoring in Organisations

... Relevance of the Letters and Photographs of the Great Depression to Americans Introduction The Great Depression is considered to be the longest and deepest economic downturn in the historical books of the Western industrialized world. In the United States, this period began in October 1929 through to 1939 and only lessened after a few relief and reform measures that were put in place by President Franklin D. Roosevelt. During the Great Depression, forgotten men, women, and children wrote letters addressed to President Roosevelt, exposing the hardships they went through (Schultz 365). Thus, Down and Out in the Great Depression represents a scrutiny through some of the letters culled to show the thoughts, problems, and emotions... Relevance of ...
6 Pages(1500 words)Literature review

... School: Topic: COACHING AND MENTORING SKILLS Lecturer: As a manager, I am open to changes and variety, as long as what is adopted as a new approach comes to serve an intended need. For this reason, I have tried and successfully used several performance management approaches including behavioral checklist, 360 degree appraisal, management by objective, and psychological appraisal. Among these, the one that best fits me as a manager and personal style is 360 degree appraisal. There are a number of reasons for preferring the 360 degree appraisal, including the fact that it allows for group work and participation. That is, instead of following the performance management process from the manager’s perspective alone, other employees... and...
1 Pages(250 words)Assignment

...COACHING AND MENTORING SKILLS - PART II Response to Alicia Your post makes a lot of important inputs on the best ways to use coaching to foster growth among employees in organizations. The aspect of the post that I would like to expand due to its interest to me is the fact that you acknowledge that coaching is a versatile process within the organization. As you put it, “each situation will present itself differently and as a result, coaching and feedback may take on many forms, even with the same individual”. Certainly, if managers will be able to read between the lines and know the kind of coaching and feedback methods to use at each...
1 Pages(250 words)Assignment
sponsored ads
Save Your Time for More Important Things
Let us write or edit the coursework on your topic "Failure/Negative Outcomes of Coaching/Mentoring" with a personal 20% discount.
GRAB THE BEST PAPER

Let us find you another Coursework on topic Failure/Negative Outcomes of Coaching/Mentoring for FREE!