Comments (0)
Add to wishlistDelete from wishlist
Cite this document
Summary
With which person or group of people from this passage do you identify most and why: the disciples in the storm, the man oppressed by demons, the prominent man with the sick child, or the woman with a debilitating and shameful illness? What were the peculiar doubts and…
Download full paperFile format: .doc, available for editing
HIDE THIS PAPERGRAB THE BEST PAPER94.6% of users find it useful 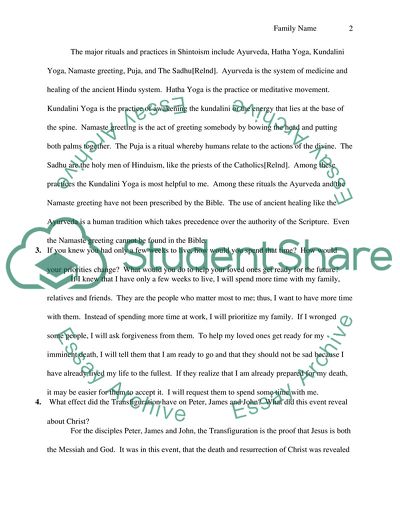 Extract of sample "The Gospels--Mark"

The Gospels --- Mark With which person or group of people from this passage do you identify most and why: the disciples in the storm, the man oppressed by demons, the prominent man with the sick child, or the woman with a debilitating and shameful illness? What were the peculiar doubts and struggles of each?
Among the group of people described, I can identify with the disciples who lost faith in Jesus during the storm. I sometimes find myself lacking in faith on Jesus especially during difficult times. Like the disciples, I do not trust Jesus enough during some trying times in my life.
The struggle of the disciples in the storm is their lack of faith. They were overwhelmed by fear and were afraid that they will perish in the storm. The struggle of the man oppressed by demons was that he was being controlled by the devil. He was powerless against the evil one. The prominent man with the sick child was helpless because his daughter is dying. He was desperate and asked for the help of Jesus. The woman with an illness was struggling from her disease of discharging blood for a long time already. She however did not doubt Jesus’ healing powers.
2. What religious traditions or rituals do you practice? What customs does your church practice? Which of these are helpful to you? Which have not been prescribed by the Bible? Describe how we sometimes put human tradition over the authority of Scripture.
The major rituals and practices in Shintoism include Ayurveda, Hatha Yoga, Kundalini Yoga, Namaste greeting, Puja, and The Sadhu (Religionfacts.com). Ayurveda is the system of medicine and healing of the ancient Hindu system. Hatha Yoga is the practice or meditative movement. Kundalini Yoga is the practice of awakening the kundalini or the energy that lies at the base of the spine. Namaste greeting is the act of greeting somebody by bowing the head and putting both palms together. The Puja is a ritual whereby humans relate to the actions of the divine. The Sadhu are the holy men of Hinduism, like the priests of the Catholics (Religionfacts.com). Among these practices the Kundalini Yoga is most helpful to me. Among these rituals the Ayurveda and the Namaste greeting have not been prescribed by the Bible. The use of ancient healing like the Ayurveda is a human tradition which takes precedence over the authority of the Scripture. Even the Namaste greeting cannot be found in the Bible.
3. If you knew you had only a few weeks to live, how would you spend that time? How would your priorities change? What would you do to help your loved ones get ready for the future?
If I knew that I have only a few weeks to live, I will spend more time with my family, relatives and friends. They are the people who matter most to me; thus, I want to have more time with them. Instead of spending more time at work, I will prioritize my family. If I wronged some people, I will ask forgiveness from them. To help my loved ones get ready for my imminent death, I will tell them that I am ready to go and that they should not be sad because I have already lived my life to the fullest. If they realize that I am already prepared for my death, it may be easier for them to accept it. I will request them to spend some time with me.
4. What effect did the Transfiguration have on Peter, James and John? What did this event reveal about Christ?
For the disciples Peter, James and John, the Transfiguration is the proof that Jesus is both the Messiah and God. It was in this event, that the death and resurrection of Christ was revealed to the disciples. The Transfiguration made the disciples affirm the real identity of Jesus. The Transfiguration revealed that Christ is the Son of God.
5. What specific lessons did Jesus teach His followers about servanthood in this passage?
Jesus taught his disciples that servanthood involves sufferings. The two requirements for servanthood that Jesus mentioned to his apostles was the denial of self and the taking up of one’s cross. Denial of self means putting others first before one’s self. It also means that God should be the center of one’s life and not the self. Taking up one’s cross means that one should be willing to “suffer” for Christ; that is, committing one’s self to Christ.
Works Cited
Religionfacts.com. "Hindu rituals and practices." n.d. religionfacts.com Web site. 2 January
2012 . Read More
Share:
Tags
Cite this document
(“The Gospels--Mark Essay Example | Topics and Well Written Essays - 500 words - 1”, n.d.)
Retrieved from https://studentshare.org/miscellaneous/1587155-the-gospels-mark

CHECK THESE SAMPLES OF The Gospels--Mark

The Kangxi Emperor and the Jesuit Mission in China

Comparing the Synoptic Gospels of Matthew, Mark, and Luke

...? The Synoptic Problem of the Gospels of Matthew, Mark, and Luke The Literary Relationship between the Three Synoptic Gospels The three Synoptic Gospels – Matthew, Mark and Luke – all have a literary relationship not only because “Mark relied on Matthew” or “Luke relied on Mark and Matthew” (Conte), or “Matthew and Luke relied on Mark” (Just), but also because the events in all three gospels follow the same sequence and are very similar in nature. The events shared by all three gospels include the preaching of John the Baptist, the baptism and temptation of Jesus, the...
3 Pages(750 words)Essay

Make a specific argument in which you agree or disagree with the following general claim: The Gospels of Mark and John present t

... Conflict between the Gospels of Mark and John The gospels of Mark and John present different interpretations of the messages of Jesus that are not entirely compatible. In agreement with the statement, an analysis of the various interpretations is necessary. The Gospel of Mark, according to bible scholars does not have an author it can be attributed to (Muddiman and John 56). The gospel itself is all about action and follows events in Jesus’ life and eventual death. This aside, it offers lessons of how the life of Jesus relates to individuals in their day to day undertakings. The author of the gospel is believed with some degree of uncertainty to be a disciple of peter who was a disciple of Jesus (Muddiman and John 22). John Mark... , the...
5 Pages(1250 words)Essay

The Gospels of Matthew and Mark

...The Gospels of Matthew and Mark Question number 2 The confusion of the disciples is evident from this passage. Jesus rebuked Peter saying, “‘Get behind me, Satan!’ he said. ‘You do not have in mind the things of God, but the things of men” (Mark 8:33b; NIV). In the next chapter, the Scripture revealed this. “But they did not understand what he meant and were afraid to ask him about it” (Mark 9:32; NIV). This happened after Jesus for the second time in the book of Mark predicted his coming death. In one commentary concerning this issue, the statement that Jesus gave regarding death and rising from the dead was said to be taken by the disciples at the...
3 Pages(750 words)Essay

...Matthew, Mark, Luke and John Affiliation Many people believe that the Bible contains parables and stories, and each book is a continuation of the previous book. The fact of the matter is that this continuation or parable driven books are for the most part the Bible. However, there are four books, the first four of the New Testament. These are the Gospels and are known as Matthew, Mark, Luke, and John. These four books tell the story of Jesus' life and death and all his miraculous works. These four disciples wrote from his point of view and while three follow each other in complete unison, one does not. Matthew, Mark and Luke are the Synoptic Gospels...
6 Pages(1500 words)Essay

...The similarities and differences of the Synoptic Gospels. INTRODUCTION. The Synoptic Gospels is a term used by modern scholars for the Gospels according to Matthew, Mark, and Luke of the New Testament in the Bible. They often recount the same stories about Jesus of Nazareth, though sometimes with substantial differences, but mostly following the same sequence and to a remarkable extent using the same words. The word "synoptic" means "with the same eye" or "seeing together." (The Gospel of John tells the story of Jesus in significantly different ways, which can be understood in terms other than literary relationships between the Gospels)...
12 Pages(3000 words)Essay

Discuss the four traditionally identified authors of the gospels, Mark, Matthew,Luke and John. In a second section, discuss the stylistic traits, characteristics unique features of the four gospels, including which came first and possible sources.#2

...Discuss the four traditionally identified of the gospels The of Mark’s gospel is Mark who was a Jew and who embraced Christianity. He was the son of Mary and was from a Hellenistic family. Mark was the cousin of Barnabas of Cyprus. He was a close ally of Peter. Peter had a special relationship with Mark. During the latter years Mark was closely associated with Peter and Paul. He was imprisoned along with Paul on many occasions. He traveled to Egypt and found the church of Alexandria and died there by Martyrdom. Matthew also known as Mathias was the son of Alphaeus of Capernaum. His original name was Levi. He was...
5 Pages(1250 words)Essay

..., but these words spoken to James and John are doctrinally similar to other messages Jesus gave to his disciples. 6. What is the last healing miracle in Marks Gospel? The last healing miracle in Mark’s Gospel occurred at Bethasida. In this miracle, Jesus laid his hands on the eyes of a blind person and the person’s sight was restored. The healed person was instructed to tell no one about the miracle that occurred. 7. When Jesus enters Jerusalem riding on a colt, those who went ahead and followed Him shouted a quote from one of the Psalms. Which Psalm did they quote from? The people in Jerusalem quoted from Psalm 118 when Jesus arrived riding on a colt. 8. The cursing of...
5 Pages(1250 words)Essay

...January 20, The Gospels—Mark Mark 9:2-13 talks about the mount of transfiguration. Jesus took Peter and James to the high mountain part and he was transfigured before them. The dazzling of Jesus clothes exemplifies his holiness and his abilities of great power. It also signifies the fact that only God can cleanse us of our sins and that our souls belongs to him. The appearance of Moses and Elijah on the mountain also represents the holiness of the prophets as well as the unlimited power of God. Here, it also proclaims the fact that both the Prophets are still alive and that they are just merely translated. According to the Old Testament Elijah and Moses never died but they were taken by...
7 Pages(1750 words)Research Paper

40 Pages(10000 words)Dissertation
sponsored ads
Save Your Time for More Important Things
Let us write or edit the essay on your topic "The Gospels--Mark" with a personal 20% discount.
GRAB THE BEST PAPER

Let us find you another Essay on topic The Gospels--Mark for FREE!