Comments (0)
Add to wishlistDelete from wishlist
Cite this document
Summary
These verses were in response to specific episodes or happenings at a certain period, and were used to expound the message in the verses. The Buddha pointed out that whoever earnestly practiced…
Download full paperFile format: .doc, available for editing
HIDE THIS PAPERGRAB THE BEST PAPER91.1% of users find it useful 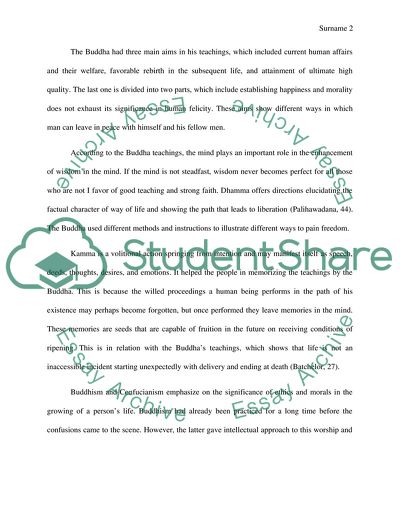 Extract of sample "The Dhammapada"

THE DHAMMAPADA The Buddha is a person whose words were used to write the verses in the Dhammapada. These verses were in response to specific episodes or happenings at a certain period, and were used to expound the message in the verses. The Buddha pointed out that whoever earnestly practiced the teachings found in the Dhammapada will taste the ecstasy of liberation (Palihawadana, 47). It is believed that the Buddha had a lot of wisdom, which he wrote in his books. People believed that his whoever followed his recordings would have a life that is guided by the same wisdom. He was born in the sixth century of a ruling family in the Himalayan foothills and named Siddhartha.
He was brought up in royalty where he was trained to become an heir of the kingdom after his father. These trainings brought a lot of suffering to his life resulting to his escape from pleasures and royal privileges. Siddhartha was not pleased with the continued practice to become a ruler. For this reason, he escaped his royal home spending many days in the forest. His escape was based on a mission to find different ways of acquiring deliverance from all suffering (Batchelor, 21).
The Buddha had three main aims in his teachings, which included current human affairs and their welfare, favorable rebirth in the subsequent life, and attainment of ultimate high quality. The last one is divided into two parts, which include establishing happiness and morality does not exhaust its significance in human felicity. These aims show different ways in which man can leave in peace with himself and his fellow men.
According to the Buddha teachings, the mind plays an important role in the enhancement of wisdom in the mind. If the mind is not steadfast, wisdom never becomes perfect for all those who are not I favor of good teaching and strong faith. Dhamma offers directions elucidating the factual character of way of life and showing the path that leads to liberation (Palihawadana, 44). The Buddha used different methods and instructions to illustrate different ways to pain freedom.
Kamma is a volitional action springing from intention and may manifest itself as speech, deeds, thoughts, desires, and emotions. It helped the people in memorizing the teachings by the Buddha. This is because the willed proceedings a human being performs in the path of his existence may perhaps become forgotten, but once performed they leave memories in the mind. These memories are seeds that are capable of fruition in the future on receiving conditions of ripening. This is in relation with the Buddha’s teachings, which shows that life is not an inaccessible incident starting unexpectedly with delivery and ending at death (Batchelor, 27).
Buddhism and Confucianism emphasize on the significance of ethics and morals in the growing of a person’s life. Buddhism had already been practiced for a long time before the confusions came to the scene. However, the latter gave intellectual approach to this worship and his ideas were followed. Buddhism lacks ethical components like those in Confucianism, which include xi, li, wen, ren, yi, zhi.
Works cited
Batchelor, Stephen. Buddhist vision . New York: Riverhead Books, 2000. Print.
Palihawadana, Mahinda. The Dhammapada. New York: Oxford University Press, 2000.
Print. Read More
Share:
Tags
Cite this document
(“The Dhammapada Essay Example | Topics and Well Written Essays - 500 words”, n.d.)
The Dhammapada Essay Example | Topics and Well Written Essays - 500 words. Retrieved from https://studentshare.org/miscellaneous/1587151-the-dhammapada

CHECK THESE SAMPLES OF The Dhammapada

Buddhism: The Religion of Peace

...and legends surrounding his life and times; the Abhidhamma Pitaka which expounds the Theravada school of thought (ThinkQuest Library). The Dhammapada, or ‘Path of Truth,’ is the most important literary canon of Buddhism, and is a part of the Tipitaka. Its author is unknown and it is believed to record the teachings of the Buddha himself. There are frequent references made to Mara, the great tempter. It preaches a doctrine of love, freedom from sensual indulgence, and adherence to the truth. Suffering is the result of attachment, greed and desire. Meditation is the way to wisdom and nirvana. Another notable Buddhist literary work is The Questions of King Milinda, which takes the form of a philosophical dialogue, through...
6 Pages(1500 words)Research Paper

...October 29, Religion and Theology: Buddhism Main Ethical Precepts (Rules) of Buddhism The moral and ethical precepts of Buddhism are covered in twenty-six chapters of the Dhammapada, the holy book of Buddhist teachings. They are in some cases metaphorical symbols and not a point of doctrine. The point made by Lord Buddha is that the ethics is formulated for all levels of people in the society and includes the holy monk and the laity. Many of the ethical precepts are related to resolving quarrels, conflicts, and hostility. The method to avoid quarrels is achieved by non-violence, love, forbearance, and non-hatred. From the holy book, chapters 16–20 are devoted to nirvana and the path to enlightenment (Buddharakkhita...
3 Pages(750 words)Essay

...in practice, so thus people often ignore the internal aspects of the requirements in favor of practical success. The missing element in consequentialist theories and the element that makes many people view the categorical imperative as unworkable in practice is, in fact the focus on the external world rather than recognizing the primacy of thought itself. That is to say, thought itself is the original action and not anything that can actually be physically performed in the world. The Dhammapada opens with the following statement: All that we are is the result of what we have thought: it is founded on our thoughts, it is made up of our thoughts. If a man speaks or acts with an evil thought, pain follows him, as the wheel...
7 Pages(1750 words)Essay

.... While basic essentials like simple and aesthetic lives were known to be led by these monks there were still certain unknown facts. For instance the Buddhist monk has to agree to take refuge into the faith (FPMT). Not only are they given a specific period to understand the faith but also have to see if they can live up to the principles established by Buddhism in all their entirety. There is great prestige laid down for individuals who choose to continue to pass down Buddha’s teachings. The Buddha laid down rules about the Buddhist monks. Despite the word Bhikku which meant beggar, the Dhammapada states that he is called that not because he begs but because he can subdue all forms of evil, small or great (Inwood 1981)....
5 Pages(1250 words)Essay

...Asians philosophy Introduction Asian religions are centered in the issues concerned with ethics. They propagate the need for self central (Gorsuch 25) whereby the concept emphasizes on person striving to be happy and pursue virtue or good morals. These philosophies are centered in need of each individual to pursue personal perfection by realizing the deep deposit and inner strength inhabited in the person (Gupta 258). These philosophies include; The Upanishads, The Dhammapada, The Bhagavad Gita, Shinto, Sikh, confucious Mencius, Daodejing (Tao Te Ching), The Zhuangzi, Zen flesh, and Zen Bornes. This paper is going to focus on the cosmology or fundamental beliefs of each philosophy and the ethics developed, based on the...
8 Pages(2000 words)Term Paper

...and Japan in 552 CE. Buddhism spread to Tibet in 641 CE. In all the countries of its adoption, Buddhism experienced its highs and lows due to repression and persecution by some rulers, and violent encounters with Islam. It is now the predominant religion in Sri Lanka, China, Japan, Taiwan, Tibet, Nepal, Mongolia, Korea, and Vietnam, and retains a significant position in India (Harderwijk, “Time-Line”). Buddhism remains a major world religion. The first Western translation of the Dhammapada into German in 1862 signified its entry into the West. Zen Buddhist tradition is particularly attractive to Westerners. Buddhist meditation techniques are gaining widespread acceptance as tools for healthy living. For most Western...
2 Pages(500 words)Essay

..., only a deep sense of peacefulness. Thus, Buddhism is a philosophy that can also be a religion. 2. Referring to The Teachings of the Buddha, name two passages and how they relate to personal, professional, and public ethics. One of the passages that relates to personal ethics is this: “Wakefulness is the way of life…How happy he is! For he sees that wakefulness is life!...” (from the Dhammapada translated by Byrom as qtd. in Kornfield 1). When I am wakeful, I am aware of who I am and what I am doing in relation to the effects of my actions to others and my environment. Wakefulness is important to being mindful of my impacts on others. In addition, this passage is related to professional and public ethics: “A person...
1 Pages(250 words)Essay
sponsored ads
Save Your Time for More Important Things
Let us write or edit the essay on your topic "The Dhammapada" with a personal 20% discount.
GRAB THE BEST PAPER

Let us find you another Essay on topic The Dhammapada for FREE!