Comments (0)
Add to wishlistDelete from wishlist
Cite this document
Summary
The country has been hit by several natural and manmade disasters over the years. Due to rate at which some of these disasters occur, the federal government has put in place measures that are meant to help deal with…
Download full paperFile format: .doc, available for editing
HIDE THIS PAPERGRAB THE BEST PAPER97.1% of users find it useful 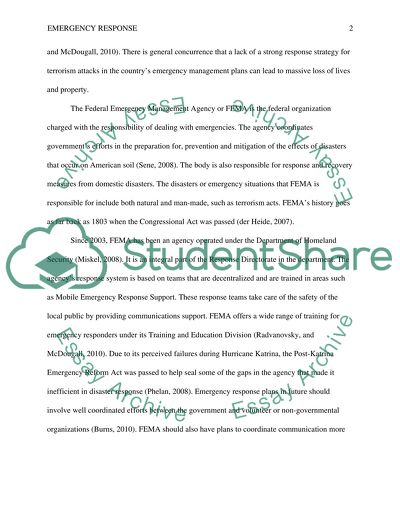 Emergency Response Disasters and emergency situations are not new in America. The country has been hit by several natural and manmade disasters over the years. Due to rate at which some of these disasters occur, the federal government has put in place measures that are meant to help deal with emergency situations. Emergency response is one of the aspects of disaster management. It entails the mitigation of the impact of a disaster on property, the environment. These mitigation measures are designed to prevent further loss of lives or property (Haddow, Bullock and Coppola, 2010). The decisions taken during the response phase in disaster management should help restore order and re-establish a state of normality mainly through rehabilitation and reconstruction. In the United States, the Department of Homeland Security is responsible for planning for and conducting emergency response services (Perry and Lindell, 2003).
During the emergency response phase, first responders are posted in the disaster area, while the necessary emergency services are mobilized. Some of the core services during this phase include policing, ambulance and firefighting services. Recent research information shows that although the federal government has put measures in place to aid in efficient response during emergencies, there is much more that needs to be done to ensure that further loss of life and damage to property and the environment does not occur (Waugh and Streib, 2006). During recent times, the government’s response to disasters such as the Florida floods in 2004 and Hurricane Katrina a year later has drawn a lot of criticism from what is seen as lackluster efforts from government to respond to the disasters in time (Sene, 2008). For homeland security, scholars argue that since the country is at risk of domestic and internationals terrorist attacks, more should be done to enable quick response in case a September 11 disaster occurs again (Radvanovsky, and McDougall, 2010). There is general concurrence that a lack of a strong response strategy for terrorism attacks in the country’s emergency management plans can lead to massive loss of lives and property.
The Federal Emergency Management Agency or FEMA is the federal organization charged with the responsibility of dealing with emergencies. The agency coordinates government’s efforts in the preparation for, prevention and mitigation of the effects of disasters that occur on American soil (Sene, 2008). The body is also responsible for response and recovery measures from domestic disasters. The disasters or emergency situations that FEMA is responsible for include both natural and man-made, such as terrorism acts. FEMA’s history goes as far back as 1803 when the Congressional Act was passed (der Heide, 2007).
Since 2003, FEMA has been an agency operated under the Department of Homeland Security (Miskel, 2008). It is an integral part of the Response Directorate in the department. The agency’s response system is based on teams that are decentralized and are trained in areas such as Mobile Emergency Response Support. These response teams take care of the safety of the local public by providing communications support. FEMA offers a wide range of training for emergency responders under its Training and Education Division (Radvanovsky, and McDougall, 2010). Due to its perceived failures during Hurricane Katrina, the Post-Katrina Emergency Reform Act was passed to help seal some of the gaps in the agency that made it inefficient in disaster response (Phelan, 2008). Emergency response plans in future should involve well coordinated efforts between the government and volunteer or non-governmental organizations (Burns, 2010). FEMA should also have plans to coordinate communication more effectively during the response stage of disaster management so as to minimize loss of lives and property.
References
Burns, L. (2010). FEMA (Federal Emergency Management Agency): an organization in the crosshairs. New York: Novinka Books.
Der Heide, E.A. (2007). Disaster Response: Principles of Preparation and Coordination. Retrieved December 5, 2011 from: http://coe-dmha.org/Media/Disaster_Response_Principals.pdf
Haddow, G.D., Bullock, J. and Coppola, D. (2010). Introduction to Emergency Management. Burlington, MA: Elsevier.
Perry, R. and Lindell, M. (2003). Preparedness for Emergency Response: Guidelines for the Emergency Planning Process. Disasters. 27(4):336–350.
Phelan, T. (2008). Emergency management and tactical response operations: bridging the gap. Burlington, MA: Butterworth-Heinemann.
Miskel, J.F. (2008). Disaster Response and Homeland Security: What Works, What Doesnt. Stanford, CA: Stanford University Press.
Radvanovsky, R. and McDougall, A. (2010). Critical infrastructure: homeland security and emergency preparedness. New York: Taylor and Francis.
Sene, K. (2008). Flood warning, forecasting and emergency response. New York: Springer.
Waugh, W and Streib, G. (2006). Collaboration and Leadership for Effective Emergency Management. Public Administration Review. 66(1): 131-140. Read More
Share:
Tags
Cite this document
(“Emergency response Research Paper Example | Topics and Well Written Essays - 500 words”, n.d.)
Emergency response Research Paper Example | Topics and Well Written Essays - 500 words. Retrieved from https://studentshare.org/miscellaneous/1586160-emergency-response

CHECK THESE SAMPLES OF Emergency response

The Stakeholders in Emergency Response

...﻿The Stakeholders in Emergency Response The Specification: This project is being done to all the stakeholders in emergency response; these are the people who respond to various types of medical emergencies such as accidents, fires, collapse of buildings or crime scenes. The people who are expected to use this VoIP service are the nurses who respond to emergencies, fire fighters, the police and the victims of the emergencies. The sponsors of this project who are an emergency response unit found out that they almost always reached the scene of the emergencies being late,...
10 Pages(2500 words)Dissertation

...Florida Emergency Response Plan The of Florida has realized the importance of effective and efficient Emergency Response Plans as early as 1992 when hurricane Andrew devastated the southern Dade County. Considered as one of the most devastating disasters in US history, it has brought to light the specific requirements in services, logistics and finance that may be needed in such calamities. Andrew was a Cape Verde hurricane whose economic devastation along a path through the northwestern Bahamas, the southern Florida peninsula, and south-central Louisiana and total damages have been estimated to be close to 25 billion and taking more than 20 lives (Rappaport, 1993). However, the question is now to judge whether... what is on...
7 Pages(1750 words)Essay

...Page Address Phone Number E-mail Case Responding to Cyclone Nargis in Myanmar (Roman and Thein) Cyclone Nargis on 2-3 May 2008 claimed 138, 373 dead or mission and 2.4 million survivors with affected livelihoods. The disaster was described as a National Emergency resulted from failure to foresee and prepare for the same. The international community was supporting the disaster crisis management efforts. However there have been various obstacles in order to mobilize resources, logistics and medical supplies. The political situation was such that it was focused more on working within the pre-established protocols rather than particular response to the situation. Myanmar Government preferred government to...
5 Pages(1250 words)Essay

...Emergency Plan Executive summary The events that take place after a disaster strikes are very critical and collectively refer to as emergency response. For example, a quick warning to occupants to vacate a building can save many lives. Therefore, it is necessary to develop good emergency response plan that will help in minimizing the effects of the disaster. Firstly, the emergency response planning begins with the assessment of potential risks thus highlighting the emergency scenarios. In this case, the response team seeks to understand what can happen and can estimate the amount of resources needed to handle the situation. After assessment, the planning process proceeds to the course of actions necessary to attain the performance... ...
8 Pages(2000 words)Assignment
sponsored ads
Save Your Time for More Important Things
Let us write or edit the research paper on your topic "Emergency response" with a personal 20% discount.
GRAB THE BEST PAPER

Let us find you another Research Paper on topic Emergency response for FREE!