Comments (0)
Add to wishlistDelete from wishlist
Cite this document
Summary
This paper is a brief response to the question of what, in a Christian worldview, are the aspects of Shalom on the three levels of personal relationships, and how they can be visible in someone’s life? It will include a definition of Shalom, a description of the three levels…
Download full paperFile format: .doc, available for editing
HIDE THIS PAPERGRAB THE BEST PAPER94.5% of users find it useful 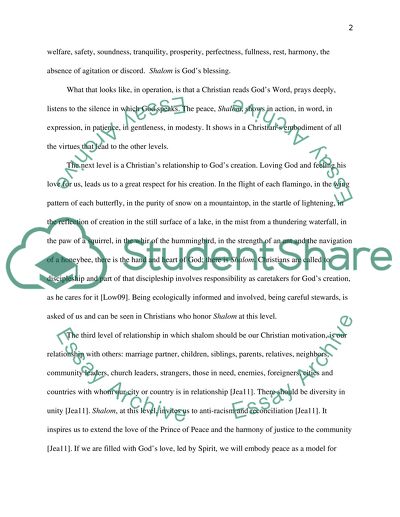 December 6, Shalom: Relationship with God, Creation, Others This paper is a brief response to the question of what, in a Christian worldview, are the aspects of Shalom on the three levels of personal relationships, and how they can be visible in someone’s life? It will include a definition of Shalom, a description of the three levels of personal relationship in which a Christian bears responsibility, and an exploration of how to apply the Shalom concept in daily living.
Shalom is more than a word. Like all words, it is a symbol for something far more complex. Shalom is popularly understood to be a Hebrew word for “peace” (The Refiners Fire). However, it also means, according to Strongs Concordance (Strong 7965), completeness, wholeness, health, peace, welfare, safety soundness, tranquility, prosperity, perfectness, fullness, rest, harmony, the absence of agitation or discord. Shalom is a blessing (The Refiners Fire).
There are three levels of Christian relationship. We are called to be in relationship with God, with God’s creation, and with others (Lowe and Claiborne). Our relationship with God is the most basic and critical. That relationship was a gift to us, through Jesus, the life-giver. When Jesus ascended to heaven, he left us the Holy Spirit, so that his ministry is still alive, still dynamic, still with us. By tuning into the leading of the Holy Spirit, and responding to that leading, we can stay within God’s plan for our lives. In that way, God is not something far away and external to us, but is internal and immediate. This is the deepest source of peace, of wholeness, completeness, health, welfare, safety, soundness, tranquility, prosperity, perfectness, fullness, rest, harmony, the absence of agitation or discord. Shalom is God’s blessing.
What that looks like, in operation, is that a Christian reads God’s Word, prays deeply, listens to the silence in which God speaks. The peace, Shalom, shows in action, in word, in expression, in patience, in gentleness, in modesty. It shows in a Christian’s embodiment of all the virtues that lead to the other levels.
The next level is a Christian’s relationship to God’s creation. Loving God and feeling his love for us, leads us to a great respect for his creation. In the flight of each flamingo, in the wing pattern of each butterfly, in the purity of snow on a mountaintop, in the startle of lightening, in the reflection of creation in the still surface of a lake, in the mist from a thundering waterfall, in the paw of a squirrel, in the whir of the hummingbird, in the strength of an ant and the navigation of a honeybee, there is the hand and heart of God; there is Shalom. Christians are called to discipleship and part of that discipleship involves responsibility as caretakers for God’s creation, as he cares for it (Lowe and Claiborne). Being ecologically informed and involved, being careful stewards, is asked of us and can be seen in Christians who honor Shalom at this level.
The third level of relationship in which shalom should be our Christian motivation, is our relationship with others: marriage partner, children, siblings, parents, relatives, neighbors, community leaders, church leaders, strangers, those in need, enemies, foreigners, cities and countries with whom our city or country is in relationship (Brown). There should be diversity in unity (Brown). Shalom, at this level, invites us to anti-racism and reconciliation (Brown). It inspires us to extend the love of the Prince of Peace and the harmony of justice to the community (Brown). If we are filled with God’s love, led by Spirit, we will embody peace as a model for others. We will value cooperation over competition. We will extend patience, charity and forgiveness to others, as Christ has done for us. We will celebrate peace and be active in preventing and stopping war. We will be honest and truthful, not given to gossip and back-stabbing. Sin is a violation of Shalom (Lowe and Claiborne). We will honor wisdom over winning. We will honor ourselves in the process, as distributors of Shalom. Shalom is the model of peace that Christ represents, the sweetness of Spirit living in Christians and implemented at all three levels of relationship: to God, to creation, to others.
Works Cited
Brown, Jeannine. Bethel Antiracism and Reconciliation. 2011. 6 December 2011
.
Lowe, Ben and Shane Claiborne. Green Revolution: Coming Together to Care for Creation.
Westmont: InterVarsity Press, 2009.
Strong, James. Strongs Exhaustive Concordance of the Bible. Peabody: Hendrickson, 2009.
The Refiners Fire. The Refiners Fire . nd. 6 December 2011
. Read More
Share:
Tags
Cite this document
(“Developing a Christian Mind Essay Example | Topics and Well Written Essays - 500 words - 2”, n.d.)
Retrieved from https://studentshare.org/miscellaneous/1585935-developing-a-christian-mind

CHECK THESE SAMPLES OF Developing a Christian Mind

...? Christian Copts Coptic Christianity had its beginnings in Egypt about 50 years following the death of Christ (50 AD). It is believed to be the first Christian sect outside present day Israel, the Holy Land. From the earliest days, Coptic Christians have been an oppressed minority subject to violence and subjugation by the dominant group. 2000 years ago it was the Roman Empire then the Byzantine Empire who repressed the Copts and for the past 1500 years the Sunni Muslim majority has relegated them to second-class citizen status. Recently, following multiple regime changes in Egypt, Copts have endured increased instances of violence. The history of Coptic...
5 Pages(1250 words)Research Paper

...and natural form the structure of the door of the church of Santa Sabina represents a transcultural and transhistorical phenomenon. The narrative intensifies life, because if we see the relief through the Judeo-Christian traditions the scene of calling, or the vocation demonstrates the special relationship between God and the nation of Israel. That is why this narrative is closely linked with the Book of Exodus 3, where human and superhuman (an angel) meet. The angel summons the human to carry out a task that exceeds his abilities, but which he accepts to perform. Kemp comments that both in the Book of Exodus as well as in the relief, these elements are methodically arranged. Moses is pasturing the flocks, afterwards...
4 Pages(1000 words)Book Report/Review

...in order to prove that he had indeed risen from the dead. There were therefore only a small number of witnesses that could describe how Jesus had descended up to heaven. All these witnesses also played significant roles in the development and the territorial expansion of the Christian religion. The eye - witness accounts strongly indicate that the events depicted in the gospel of Mark actually took place. Finally Meier would almost have certainly written that the story of the transfiguration of Jesus Christ was one that proved very useful for the Early Church to include in the gospel of Mark. The disciples that witnessed the transfiguration were adamant that they really did see Elijah and Moses...
4 Pages(1000 words)Essay

...Christian Education 26th November 2009 I. Introduction: In an age of secularism and emphasis on materialism, there is an urgent need to form the minds of young people in the way of God - “teach them the way they should go, so that when they grow up they would not depart from it”1 Like traditional education, which focuses more on enriching the child intellectually to meet the demands of the real world, Christian Education achieves the same objective, but goes beyond the former to equip the child with the requisite knowledge of God to help live triumphantly in the secular world. . “Christian Education is the learning process that leads people to learn how to live according to the will of God, showing and practicing the love for God... ...
8 Pages(2000 words)Research Paper

...be, in part, true and can really happen. For example, Christians believe in monogamy but Muslims’ marriage and family tradition is polygamous. The Christians belief is based upon what they believe is true and that is the Christian concept of a monogamous relationship or marriage. Christians believe that this is the correct partner and relationship practice because they believe in the teachings from the Bible. Muslims, on the other hand, also has different literature and context about marriage and family. What may be right for the Muslims, like in the example above, contradicts the beliefs of the Christians. And in this part of moral relativism, I agree....
6 Pages(1500 words)Essay

...of the church is, therefore, part of the dual activity of creation and salvation which both continue before, during and after course of human history. Christians are called to work within this framework, inspired and led by God to participate in both earthly and heavenly domains. The addition of a political agenda in search of social justice which includes rather than exploits the poor and sick people in our societies developed into the “Liberation Theology” branch of Christianity and this has been an important part of world Christianity. Although originating in a South American and Roman Catholic context it has influenced many denominations and encouraged a review of...
12 Pages(3000 words)Research Paper

...Developing a Christian Mind: Written Reflection on William Wilberforce’s Life and Worldview Table of Contents Table of Contents Introduction 2 Reflection 2 Conclusion 7 References 8 Introduction William Wilberforce is remembered in history as one of the leading abolitionists in England in the 18th and 19th Centuries, writing, speaking, and advocating through Parliament for the abolishment of slavery in the Commonwealth. Wilberforce lived a life as a youth that was prone to drinking, gambling, and other indiscretions. As John Piper describes in his biography of Wilberforce “Amazing Grace” (2006), the youth met Isaac Milner at age 25 and had a profound conversion experience after reading...
4 Pages(1000 words)Book Report/Review

.... However, the Bible can also be said to be the source of differing beliefs witnessed in different Christian traditions. Important to note is that the Bible in itself is not a revelation of the existence of God but contains witnesses that profess the revelation of God. Notably, the Bible was written in a very different historical period that often makes it difficult to extrapolate and interpret the provisions to fit within another time in history. Consequently, the role, status and authority of the Bible according to the different Christian traditions developed to have similarities and differences. According to the study guide prepared by Sinclair & Marion, varied interpretations of the...
8 Pages(2000 words)Essay

...Developing a Christian Mind - Reading Report I. Thesis of the Book According to Michael Wittmer, heaven is notthe prescribed destination for human beings to embrace Christianity on earth. II. Analysis of Argument Concerning Michael Wittmer’s report, “Heaven is a Place on Earth,” the earth is presumably a final destination for human beings. Therefore, it surpasses the ideology that it is a stopover for the human beings in transition to heaven as claimed by most worldly Christianity. To refute this argument, Wittmer is of the opinion that God created the earth and human beings to inhabit it with the prime aim of giving them a time to make good use...
2 Pages(500 words)Book Report/Review
sponsored ads
Save Your Time for More Important Things
Let us write or edit the essay on your topic "Developing a Christian Mind" with a personal 20% discount.
GRAB THE BEST PAPER

Let us find you another Essay on topic Developing a Christian Mind for FREE!