Comments (0)
Add to wishlist Delete from wishlist
Cite this document
Summary
According to Michael Wittmer, heaven is not the prescribed destination for human beings to embrace Christianity on earth. Concerning Michael Wittmer’s report, “Heaven is a Place on Earth,” the earth is presumably a final destination for human beings…
Download full paper File format: .doc, available for editing
HIDE THIS PAPERGRAB THE BEST PAPER91% of users find it useful 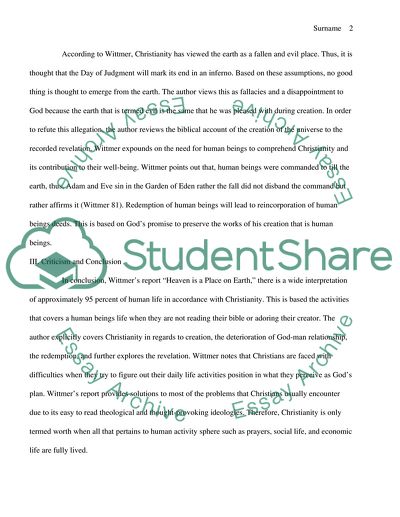 Developing a Christian Mind - Reading Report I. Thesis of the Book According to Michael Wittmer, heaven is notthe prescribed destination for human beings to embrace Christianity on earth.
II. Analysis of Argument
Concerning Michael Wittmer’s report, “Heaven is a Place on Earth,” the earth is presumably a final destination for human beings. Therefore, it surpasses the ideology that it is a stopover for the human beings in transition to heaven as claimed by most worldly Christianity. To refute this argument, Wittmer is of the opinion that God created the earth and human beings to inhabit it with the prime aim of giving them a time to make good use of their earthly life. Failure to embrace this presumption, the author feels it would be a misinterpretation of God’s objective. According to the Wittmer, Christianity has set up several benchmarks that have resulted into misconceptions, however, the book of genesis usurp this misapprehension resulting into widening the perception of human beings to unearth the value and the tremendous dignity of their everyday life. Nevertheless, Wittmer’s objective was to enable human beings to perceive the complexities of life through the context of Christianity implying the inevitability of the Christian books rather than the Bible (Wittmer 53).
According to Wittmer, Christianity has viewed the earth as a fallen and evil place. Thus, it is thought that the Day of Judgment will mark its end in an inferno. Based on these assumptions, no good thing is thought to emerge from the earth. The author views this as fallacies and a disappointment to God because the earth that is termed evil is the same that he was pleased with during creation. In order to refute this allegation, the author reviews the biblical account of the creation of the universe to the recorded revelation. Wittmer expounds on the need for human beings to comprehend Christianity and its contribution to their well-being. Wittmer points out that, human beings were commanded to till the earth, thus, Adam and Eve sin in the Garden of Eden rather the fall did not disband the command but rather affirms it (Wittmer 81). Redemption of human beings will lead to reincorporation of human beings deeds. This is based on God’s promise to preserve the works of his creation that is human beings.
III. Criticism and Conclusion
In conclusion, Wittmer’s report “Heaven is a Place on Earth,” there is a wide interpretation of approximately 95 percent of human life in accordance with Christianity. This is based the activities that covers a human beings life when they are not reading their bible or adoring their creator. The author explicitly covers Christianity in regards to creation, the deterioration of God-man relationship, the redemption, and further explores the revelation. Wittmer notes that Christians are faced with difficulties when they try to figure out their daily life activities position in what they perceive as God’s plan. Wittmer’s report provides solutions to most of the problems that Christians usually encounter due to its easy to read theological and thought-provoking ideologies. Therefore, Christianity is only termed worth when all that pertains to human activity sphere such as prayers, social life, and economic life are fully lived.
Work Cited
Wittmer, Michael E. Heaven Is a Place on Earth: Why Everything You Do Matters to God. New York: Zondervan, 2004. Print. Read More
Share:
Tags
Cite this document
(“Developing a Christian Mind - Reading Report Book /Review”, n.d.)
Retrieved from https://studentshare.org/religion-and-theology/1584556-developing-a-christian-mind-reading-report

CHECK THESE SAMPLES OF Developing a Christian Mind - Reading Report

As the name describes quantitative research deals with numbers or items that can be expressed in numbers. It gives information about the number of people involved in the topic of the research. “Quantitative research is all about quantifying the relationships between variables. Variables are the things you measure on your subjects, which can be humans, animals, or cells.&rd...
9 Pages (2250 words) Report

... by itself (Duncan Williamson, 2003) 1. Relevance of Investment Appraisal: While investing on any project, the company normally would have a choice. The management need to have a good understanding of each of these proposals and should be able to weigh the benefits and drawbacks of each proposal. All the decisions require a detailed analysis to assess whether or not the investment is feasible for the company. The feasibility of the project depends not only on financials of the company but also partly on non- financial factors (Bized – Finance and Investment, 2008). Companies have various choices for change and development. The senior management need to ensure that all the merits and demerits of the investment are taken...
14 Pages (3500 words) Report

The infrastructural improvement in the transport sector in Kenya has enabled speedy delivery of meat to the market while the meat is still fresh. At the same time, cold rooms have been utilized as a means of storage for meat. These facilities check on t...
6 Pages (1500 words) Report

... We have been asked, in our capa as organizational consultants, to help We Make Widgets, Inc solve some work-life balance problems prevalent among its top leadership. With this end in mind, we study some popular literature to understand the basics of work-life balance. It is followed by the summary of our suggestions to the company. Introduction Work-life balance is variously interpreted by different people. To some, work-life balance is doing a job, where work is a means to support life, while to others it means to be in an employment where stress is kept in manageable limits. Broadly, it means to arrive at a ‘fit’ or have the right combination of professional requirements and other aspects of life including parenting, socializing...
6 Pages (1500 words) Report

... vision of technical leadership are services, customer focus, growth platforms and globalization. Each of them are linked ultimately to maintaining the technical leadership that G.E. is widely famous for. The company invests aggressively in research and development to create technical breakthroughs that redefine markets, bring higher margins and bring new products and designs to the consumer. Its obsession with innovation is the fear that todays innovations will become commodities next year that will erode profit margins and wipe out its technological advantages. Its services sector is more on after-sales service in the areas of power generation, locomotion, flight and delivery of medical imaging equipment. The idea is to help... General...
12 Pages (3000 words) Report
sponsored ads
Save Your Time for More Important Things
Let us write or edit the book report/review on your topic "Developing a Christian Mind - Reading Report" with a personal 20% discount.
GRAB THE BEST PAPER

Let us find you another Book Report/Review on topic Developing a Christian Mind - Reading Report for FREE!