Comments (0)
Add to wishlistDelete from wishlist
Cite this document
Summary
Martin Luther King was a Baptist preacher and political activist, who lived for a fewer than 40 years, who in that short time transformed the lives of Black Americans. Martin Luther King was born on 15th January 1929 in Atlanta, Georgia, state in the USA’s Deep South. At…
Download full paperFile format: .doc, available for editing
HIDE THIS PAPERGRAB THE BEST PAPER91.1% of users find it useful 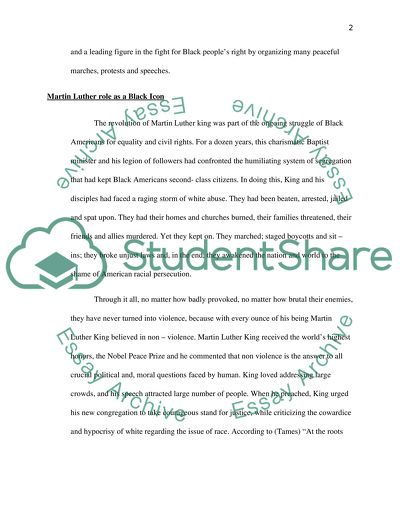 Download file to see previous pages Two women shaped Kings early life, one was his mother and other was his maternal grandmother. Martin Luther had great belief in God, which was nurtured by his father and other close relatives.
He encountered church every Sunday and there some 4,000 members of Atlanta’s Black community found refuge from the mistreatment that was their daily experience in a state where segregation laws where strictly enforced. He sooner started realizing the hard life of Black Africans who were ill treated by Whites. Later in life he became enthralled by the work of Mahatma Gandhi who fought against the British colonial rule. So he wanted to help American Blacks win their freedom, not from foreign rule but from injustice. Martin Luther chose the non – violent way of preaching which was able to captivate Black and white listeners alike. Later he became a Christian minister in church and a leading figure in the fight for Black people’s right by organizing many peaceful marches, protests and speeches.
The revolution of Martin Luther king was part of the ongoing struggle of Black Americans for equality and civil rights. For a dozen years, this charismatic Baptist minister and his legion of followers had confronted the humiliating system of segregation that had kept Black Americans second- class citizens. In doing this, King and his disciples had faced a raging storm of white abuse. They had been beaten, arrested, jailed and spat upon. They had their homes and churches burned, their families threatened, their friends and allies murdered. Yet they kept on. They marched; staged boycotts and sit –ins; they broke unjust laws and, in the end, they awakened the nation and world to the shame of American racial persecution.
Through it all, no matter how badly provoked, no matter how brutal their enemies, they have never turned into violence, because with every ounce of his being Martin Luther King believed in non – violence. Martin Luther King received the world’s highest ...Download file to see next pagesRead More
Share:
Tags
Cite this document
(“African History Essay Example | Topics and Well Written Essays - 1000 words - 1”, n.d.)
African History Essay Example | Topics and Well Written Essays - 1000 words - 1. Retrieved from https://studentshare.org/miscellaneous/1585717-african-history

CHECK THESE SAMPLES OF African History

Psychological disorders and how they affect every day life

Is the US Congress too powerful

The importance of African History

...Insert Introduction The Greek Empire was wide enough to cover the Athenian and the Macedonian Empires and covered a wide epoch starting from 8th century BC to ca. 600 AD. During the Hellenistic period, the Greek Empire covered the Diadochi states such as the Seleucid, the Antigonoid and the Ptolemaic dynasties. The influence of the Grecian-Hellenistic power had a profound influence over Africans in Egypt and North Africa because of it imperialist nature. According to Swain, the Greek Empire is known to have established diplomatic relations in 324 BC with greater parts of North Africa. This is to the effect that the Libyans and Carthaginians are some of the people who sent complimentary embassies to Alexander the Great...
1 Pages(250 words)Essay

...History and Political Science 10 February African History The impact of WWI on the colonial administration and governance in Africa and the involvement of Indigenous Africans in the War Different parts of Africa reacted differently to the invasion of Europeans in Africa, which took place in the nineteenth century (Mentan 303). A number of Indigenous groups from Africa had suffered from long periods of strife. A region like East Africa was uncertain of the future when it welcomed European presence. In other nations such as Tanganyika, now Tanzania, Ghana, Ethiopia, Zimbabwe and Libya, there was a lot of resistance. All in all, peace was hoped for in all regions. During...
9 Pages(2250 words)Essay

...﻿AFRI 222Homework Reading Assignment #3 - part 2 / Due: See syllabus Ch. 2 “Legacies of the Past: Themes in African History,” by John Akare Aden and John Hanson. READ ONLY the section onIndependence and Postcolonial Africa, pp. 51-54 For additional help, View the video: Africa: States of Independence – the Scramble for Africa, and take notes on the following questions http://www.youtube.com/watch?v=LbT44HwzNrI 44:54 min. total, (at 23.36 begins the topic of African nationalism & Independence), (at 33.38 begins the section on post-independence) 1. What external pressures caused European governments to end their occupation and pull out of African territories? Among the external pressures were the independence of North America... Manuh, a...
2 Pages(500 words)Assignment

8 Pages(2000 words)Case Study
sponsored ads
Save Your Time for More Important Things
Let us write or edit the essay on your topic "African History" with a personal 20% discount.
GRAB THE BEST PAPER

Let us find you another Essay on topic African History for FREE!