Comments (0)
Add to wishlistDelete from wishlist
Cite this document
Summary
The snail is said to be predatory in nature. The snail is found in marine waters and belongs to the family Muricidae. The species is found in many parts of the world. The snail is…
Download full paperFile format: .doc, available for editing
HIDE THIS PAPERGRAB THE BEST PAPER91.1% of users find it useful 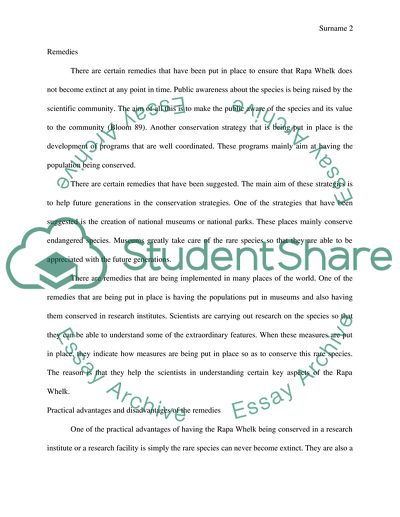 Exotic invasive species: Rapa Whelk (marine snails) Introduction Rapa Whelk, as it is commonly referred to, is quite a large species that is found in the sea. The snail is said to be predatory in nature. The snail is found in marine waters and belongs to the family Muricidae. The species is found in many parts of the world. The snail is usually found at the bottom of the sand in the sea (Centre 78). They usually burrow below the sand and in many instances they use them as hideouts. Its feeding habits are well known. The snail is carnivorous in nature and it is also a preparatory creature. Its main diet is mainly oysters and bivalves. The shell of the snail is usually globose (rounded). The species is distinctively spiked and veined darkly. It has a deep orange color inside itself. The snail can be as long as 181 mm long.
Conservation strategies of the rare species
Conservation refers protection of endangered species. These are strategies that are put in place so that they do not become extinct at any point in time. The only way to protect endangered species all over is by passing laws that help in the protection of rare species that are found on earth. This paper will endeavor to explore the strategies that are being put in place so that Rapa Whelk is conserved.
Remedies
There are certain remedies that have been put in place to ensure that Rapa Whelk does not become extinct at any point in time. Public awareness about the species is being raised by the scientific community. The aim of all this is to make the public aware of the species and its value to the community (Bloom 89). Another conservation strategy that is being put in place is the development of programs that are well coordinated. These programs mainly aim at having the population being conserved.
There are certain remedies that have been suggested. The main aim of these strategies is to help future generations in the conservation strategies. One of the strategies that have been suggested is the creation of national museums or national parks. These places mainly conserve endangered species. Museums greatly take care of the rare species so that they are able to be appreciated with the future generations.
There are remedies that are being implemented in many places of the world. One of the remedies that are being put in place is having the populations put in museums and also having them conserved in research institutes. Scientists are carrying out research on the species so that they can be able to understand some of the extraordinary features. When these measures are put in place, they indicate how measures are being put in place so as to conserve this rare species. The reason is that they help the scientists in understanding certain key aspects of the Rapa Whelk.
Practical advantages and disadvantages of the remedies
One of the practical advantages of having the Rapa Whelk being conserved in a research institute or a research facility is simply the rare species can never become extinct. They are also a source of income in many countries as both the museum and research institute attract tourists and other research institutes. One of the practical disadvantages that is experienced by the remedies is that some conservation institutes may be compromised easily and they may end up selling the species to the highest bidder (Fulton 98). This has happened in many places and this has been quite detrimental in conservation issues. There are people who stand to gain when they protect a rare species. They mainly hope to gain through monetary gains.
Works Cited
Bloom, H. "The Ruffor Small Grants foundation." Monday June 2009. Alvar Carranza. Tuesday November 2011 .Print
Centre, South East Ecological. "USGS Science for changing the world." Monday January 2011. NONINDIGENOUS SPECIES INFORMATION BULLETIN Veined Rapa Whelk, Asian Rapa Whelk, Rapana venosa. Tuesday November 2011 .Print
Dr. Shumway, S E. "Shelfish Research." JOURNAL OF SHELLFISH RESEARCH (1999): 56-89.Print
Fulton, A. The cytoskeleton:cellular architecture and choreography. New York: Alice Fulton, 1984.Print Read More
Share:
Tags
Cite this document
(“Excotic invasive species: Rapa Whelk ( marine snails ) Research Paper”, n.d.)
Excotic invasive species: Rapa Whelk ( marine snails ) Research Paper. Retrieved from https://studentshare.org/miscellaneous/1585662-excotic-invasive-species-rapa-whelk-marine-snails

...? The Asian Tiger Mosquito Teacher               The Asian tiger mosquito is an invasive species which has the ability to undergo genetic mutation as it interacts with various viral species and as it adapts to the low temperature of various temperate areas. It is the vector of several viruses including those causing dengue. It has spread from Southeast Asia to North and South America, Europe, Africa and Australia through the transportation of tires. Several attempts have been made to control it but all have failed but there is a promise in genetic engineering in order to manipulate this species whose genetic make-up easily mutates. The Asian Tiger Mosquito The Asian tiger...
5 Pages(1250 words)Research Paper

...The Positive and Negative Impact of Alien Species on South African Diversity Introduction The biodiversity of Southern Africa is one of the richest in the world. It has been totalled that the area maintains 10,000 known marine fauna and flora species (Branch, 2005). Many of these species are endemic to the region, and therefore are particularly susceptible to extinction, as there will be no other place to find them, if it happens that they're overtaken by invasive alien species. Thorough research has been done on both indigenous land and indigenous ocean life in these areas. Likewise, investigations have been designed around further...
8 Pages(2000 words)Essay

...Invasive Exotic Species Gypsy Moth: An Analytical Paper Contents of the Report Introduction Exotic Invasive Species The Gypsy Moth Gypsy Moth: The Environmental Impacts Steps to Combat the Gypsy Moth Invasion Conclusion Introduction Our Earth is home for more than 30 million species of insects. This clearly indicates that it is important to know the interactions of living beings with nature and its impact on human beings. (Triplehorn, 2005) Entomology is a Greek word formed with the combination of entamo meaning insects and logy meaning study. Hence, Entomology is a branch of zoology that deals with the study of insects. (Triplehorn,...
7 Pages(1750 words)Essay

...Order: Hymenoptra Family: Apidea Genus: Apis Species: mellifera Subspecies: scutellata Apis mellifera scutellata has been chosen for this research on invasive species which is commonly known as Africanized honey bee/Brazilian Bees/Killer bee. Background Information The ancestors of Apis mellifera scutellata live through out Africa, south of Sahara Desert. In the year 1956, few colonies of mellifera scutellata were brought to Brazil by Dr.Warwick Kerr (Kerr 1967), a geneticist to cross breed with the European Honey Bees (EHB) which did not thrive in tropics of South America to revive the declining apiculture industry. In the year 1957 accidentally few African queen bees along with swarms of European worker bees, escaped... and...
4 Pages(1000 words)Essay

...Invasive or Introduced Species" Introduction An introduced or invasive species is a species inhabiting out of its native location and has been introduced by human actions either by chance or by wish. In certain cases these species may not adapt themselves to the new-fangled environment and therefore they display very little survival rate, on the other hand some of the species survive well and proliferate in the newly introduced novel habitat. It is observed that some of the introduced species are deteriorating the natural environment to which they have been introduced, on the other hand some of the...
1 Pages(250 words)Lab Report

...Economic Impacts of Invasive Alien Species; Submitted Introduction In 1492, alien plant species invaded Germany, this was directly and indirectly through human actions, and hence, this species developed and adopted free-living habits with humans, though this led to adverse effects on the economic circles of humans (Reinhardt 8). Invasive alien species had several economic impacts both positive and negative. The negative impact supersedes the positive ones. The following are some of the negative impacts of the species; “the alien species caused damages to forests, it had a wide impact on agricultural...
1 Pages(250 words)Essay

...Response Essay Invasive Species Invasive species in certain regions are assumed to threaten the rest of the ecosystem especially those species which have became extinct. It so happens when any specie increases in population it declines the chances of growth for the others. However, this is an assumption as there is no data or researched hypothesis to support these assumptions; extinct species become scarce due to miscellaneous biodiversity factors and due to these their population starts declining in their native regions. Some researchers consider that human interference in the ecosystem has caused this disrupt, either...
1 Pages(250 words)Essay

...Invasive Marine Animal: Green Crab Introduction An invasive species is an organism that encroaches on an ecosystem and causes damage to the environment, other organism, the economy, and the human population (NWF, 2015). Their main attributes of invasive species are their capabilities to reproduce at a quick rate and to spread within the invaded ecosystem. Invasive species have tolerance for a broad range of climatic conditions and survive on an extensive variety of food. Invasive species invade the native ecosystem from places that are geographically distant from the...
9 Pages(2250 words)Essay
sponsored ads
Save Your Time for More Important Things
Let us write or edit the research paper on your topic "Excotic invasive species: Rapa Whelk ( marine snails )" with a personal 20% discount.
GRAB THE BEST PAPER