Comments (0)
Add to wishlistDelete from wishlist
Cite this document
Summary
On account of its global operations a multinational company has to deal with international clients. The management of both the domestic and…
Download full paperFile format: .doc, available for editing
HIDE THIS PAPERGRAB THE BEST PAPER93.2% of users find it useful 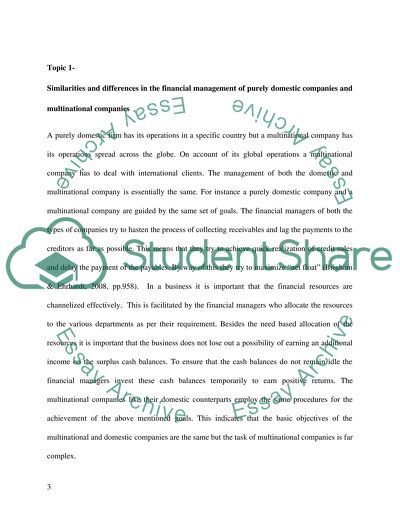 Download file to see previous pages This means that they try to achieve quick realization of credit sales and delay the payment of the payables. By way of this they try to maximize “net float” (Brigham & Ehrhardt, 2008, pp.958). In a business it is important that the financial resources are channelized effectively. This is facilitated by the financial managers who allocate the resources to the various departments as per their requirement. Besides the need based allocation of the resources it is important that the business does not lose out a possibility of earning an additional income on the surplus cash balances. To ensure that the cash balances do not remain idle the financial managers invest these cash balances temporarily to earn positive returns. The multinational companies like their domestic counterparts employ the same procedures for the achievement of the above mentioned goals. This indicates that the basic objectives of the multinational and domestic companies are the same but the task of multinational companies is far complex.
When it comes to investment of funds the domestic companies generally think with respect to domestic securities whereas the financial managers of the multinational companies are expected to be aware of the investment opportunities across the world. The multinational companies generally work in association with the international bankers and their staff and are thus in a position to make gains out of best available rates anywhere in the world.
Policies relating to credit are more crucial for the multinational companies as compared to the purely domestic firms. For instance trade in US involves poorer or developing nations. In this kind of a situation ‘granting credit’ is the necessary norm for business. Moreover the developed nations impart credit facilities to their foreign customers for making their manufacturing firms globally competent. When it comes to granting credit the risk of the multinational companies is higher than ...Download file to see next pagesRead More
Share:
Tags
Cite this document
(“MBA-International Accounting and Finance Essay Example | Topics and Well Written Essays - 5000 words”, n.d.)
MBA-International Accounting and Finance Essay Example | Topics and Well Written Essays - 5000 words. Retrieved from https://studentshare.org/miscellaneous/1568871-mba-international-accounting-and-finance

CHECK THESE SAMPLES OF MBA-International Accounting and Finance

...IAS 17-ACCOUNTING FOR LEASES INTRODUCTION: A Lease may be defined as a contractual arrangement in which a party owning an asset (Lessor) provides theasset for use to another or transfers the right to use the asset to the user (Lessee) for an agreed period of time. Leasing essentially involves separation of ownership from the economic use of an asset. MAIN FEATURES OF IAS-17 1The objective of IAS17-Accounting for leases is to prescribe appropriate accounting policies and disclosures for Lessees and Lessors with respect to Finance and operating leases. According to IAS 17, a lease is classified as Finance lease if it transfers substantially all the risks and rewards associated with the ownership of the asset to the Lessee...
6 Pages(1500 words)Assignment

The attempts by foreign investments to penetrate China’s market have proven futile in the past especially due to the conservative nature of the inhabitants. China is a strict country when it comes to culture and cultural interaction. For ex...
7 Pages(1750 words)Coursework
sponsored ads
Save Your Time for More Important Things
Let us write or edit the essay on your topic "MBA-International Accounting and Finance" with a personal 20% discount.
GRAB THE BEST PAPER

Let us find you another Essay on topic MBA-International Accounting and Finance for FREE!