Comments (0)
Add to wishlistDelete from wishlist
Cite this document
Summary
This report aims at discussing the best model that can be used by the company. The paper will discuss the three models, i.e. CAPM, Dividend Growth and APT. The basic thought process behind the investment decisions revolves…
Download full paperFile format: .doc, available for editing
HIDE THIS PAPERGRAB THE BEST PAPER98.6% of users find it useful 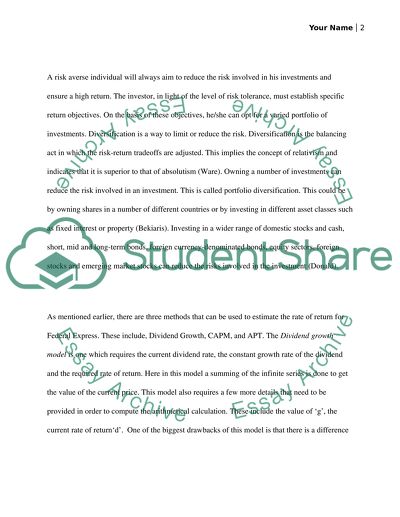 Download file to see previous pages It depends on the risk involved in that investment. Hence the investment decision is dependent on the returns, the risk involved (amount of uncertainty in generating the expected returns) and also the investor’s utility indifference (attitude towards risk and expected returns).
A risk averse individual will always aim to reduce the risk involved in his investments and ensure a high return. The investor, in light of the level of risk tolerance, must establish specific return objectives. On the basis of these objectives, he/she can opt for a varied portfolio of investments. Diversification is a way to limit or reduce the risk. Diversification is the balancing act in which the risk-return tradeoffs are adjusted. This implies the concept of relativism and indicates that it is superior to that of absolutism (Ware). Owning a number of investments can reduce the risk involved in an investment. This is called portfolio diversification. This could be by owning shares in a number of different countries or by investing in different asset classes such as fixed interest or property (Bekiaris). Investing in a wider range of domestic stocks and cash, short, mid and long-term bonds, foreign currency-denominated bonds, equity sectors, foreign stocks and emerging market stocks can reduce the risks involved in the investment (Donald).
As mentioned earlier, there are three methods that can be used to estimate the rate of return for Federal Express. These include, Dividend Growth, CAPM, and APT. The Dividend growth model is one which requires the current dividend rate, the constant growth rate of the dividend and the required rate of return. Here in this model a summing of the infinite series is done to get the value of the current price. This model also requires a few more details that need to be provided in order to compute the arithmetical calculation. These include the value of ‘g’, the current rate of return‘d’. One of the biggest drawbacks of this ...Download file to see next pagesRead More
Share:
Tags
Cite this document
(“CORPORATE FINANCE CASE ASSIGNMEN 3 Risk and return, portfolio Essay”, n.d.)
CORPORATE FINANCE CASE ASSIGNMEN 3 Risk and return, portfolio Essay. Retrieved from https://studentshare.org/miscellaneous/1562834-corporate-finance-case-assignmen-3-risk-and-return-portfolio-diversification-and-the-capital-asset-pricing-model-the-cost-of-equity

CHECK THESE SAMPLES OF CORPORATE FINANCE CASE ASSIGNMEN 3 Risk and return, portfolio diversification and the Capital Asset Pricing Model; The cost of equity

Corey, C.W. (2008) states that Africa, like China and India before it, is gradually losing its reputation as a “frontier market” and is becoming a destination for private equity, a top investment banker told the seventh annual African Growth and Opportunity Act (AGOA) Forum July 15. Tom Gibian, chief executive officer of Emerging Capital Partners (ECP), drew parallels between current economic performance across the continent and conditions seen in both China and India as both economies began to take off.  Private equity has been ingrained in the strategy of the asset allocation of institutional investors for a very long time. However, engaging the investors in general in this type of financing has been proved to b...
21 Pages(5250 words)Coursework

The pragmatic parallel mixed methods design was adopted for the study using the questionnaire, structured interview guide and content analysis were the primary instruments utilized in the collection of data. A total of 500 respondents participated in the study. These respondents represented the five sectors considered in the study, namely: the community residents, SEC employees, SEC managers, personnel from other establishments (i.e., the marketplace) and the government.  A combination of sampling techniques was used in this study: stratified random sampling, for the community respondents and SEC employees; simple random sampling, for the respondents of other companies; and purposive sampling for SEC managers and a representa...
88 Pages(22000 words)Case Study
sponsored ads
Save Your Time for More Important Things
Let us write or edit the essay on your topic "CORPORATE FINANCE CASE ASSIGNMEN 3 Risk and return, portfolio diversification and the Capital Asset Pricing Model; The cost of equity" with a personal 20% discount.
GRAB THE BEST PAPER

Let us find you another Essay on topic CORPORATE FINANCE CASE ASSIGNMEN 3 Risk and return, portfolio diversification and the Capital Asset Pricing Model; The cost of equity for FREE!