Comments (0)
Add to wishlistDelete from wishlist
Cite this document
Summary
One of the key differences between public sector and private sector collective bargaining concerns the structure and ways in which upper management receives pay increases. In private sector upper management, salaries are often directly related to their individual performance…
Download full paperFile format: .doc, available for editing
HIDE THIS PAPERGRAB THE BEST PAPER95% of users find it useful 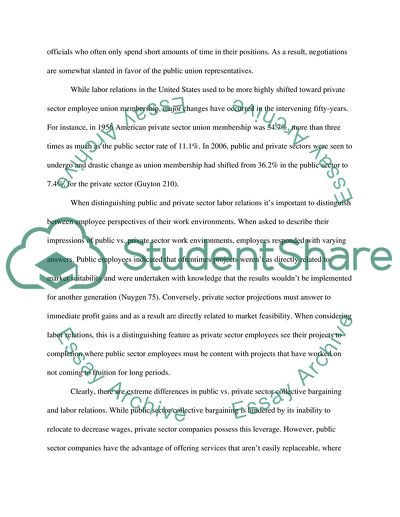 Public vs. Private Sector One of the key differences between public sector and private sector collective bargaining concerns the structure and ways in which upper management receives pay increases. In private sector upper management, salaries are often directly related to their individual performance. For instance, most executives own significant shares of company stock or are required to display tangible increases in revenue in order to receive pay raises. Exactly the opposite is true of public sector employees. In the public sector, upper-level salaries are more related to that of employees above and below them, as they are oftentimes negotiated by the unions. As a result, they have a vested interest in seeing salaries rise for all employees.
Another essential difference in collective bargaining between private and public sectors is related to location and labor value. Unlike private sector companies, public sector institutions are not capable of threatening to relocate for lower-wage costs (Guyton 213). This is evident in education where in response to union strikes, schools cannot possibly outsource employment overseas, as companies like Nike and have done. However, unions are able to use statistics from surrounding areas to pressure public sector companies to raise wages.
Indeed union negotiations are one of the major distinguishing characteristics in private and public sector collective bargaining. Private salary disputes are restricted by the knowledge that customers are able to obtain products elsewhere, whereas in the public realm it is often difficult or impossible for patrons to go to the closet competitor (Boggs 9). Libraries are an example of this situation. The union representatives are often long-term officials who have experience in negotiations, whereas the officials they are dealing with are appointed or elected officials who often only spend short amounts of time in their positions. As a result, negotiations are somewhat slanted in favor of the public union representatives.
While labor relations in the United States used to be more highly shifted toward private sector employee union membership, major changes have occurred in the intervening fifty-years. For instance, in 1956 American private sector union membership was 34.7%, more than three times as much as the public sector rate of 11.1%. In 2006, public and private sectors were seen to undergo and drastic change as union membership had shifted from 36.2% in the public sector to 7.4%. for the private sector (Guyton 210).
When distinguishing public and private sector labor relations it’s important to distinguish between employee perspectives of their work environments. When asked to describe their impressions of public vs. private sector work environments, employees responded with varying answers. Public employees indicated that oftentimes projects weren’t as directly related to market suitability and were undertaken with knowledge that the results wouldn’t be implemented for another generation (Nuygen 75). Conversely, private sector projections must answer to immediate profit gains and as a result are directly related to market feasibility. When considering labor relations, this is a distinguishing feature as private sector employees see their projects to completion where public sector employees must be content with projects that have worked on not coming to fruition for long periods.
Clearly, there are extreme differences in public vs. private sector collective bargaining and labor relations. While public sector collective bargaining is hindered by its inability to relocate to decrease wages, private sector companies possess this leverage. However, public sector companies have the advantage of offering services that aren’t easily replaceable, where consumers are able to switch to another private sector company if they aren’t able to meet labor demands. In determining labor relations it’s clear that the private sectors more direct connection to immediate profits determines general workplace relations and influences company goals.
References
Boggs, Carl.  1999.  "Economic Debate:  Where Social Movements and Labor Meet" in Brecher and
Costello, eds.:
Guyton, Jason.  2007.  Public vs. Private Sector: If You Fail We All Fail. Ithaca and London:
Cornell University Press.
Nuygen, Costello.  2003.  "American Labor:  The Promise of Decline" Los Angeles:  UCLA Institute of
Industrial Relations. Read More
Share:
Tags
Cite this document
(“Public Sector vs. Private Sector Essay Example | Topics and Well Written Essays - 500 words”, n.d.)
Retrieved from https://studentshare.org/miscellaneous/1561347-public-sector-vs-private-sector

CHECK THESE SAMPLES OF Public Sector vs. Private Sector

...﻿Evaluation of projects - Public Sector vs Private Sector - BlueJay Manufacturing Project – Aims In BlueJay Manufacturing a project needs to be developed for supporting the training of employees in responding more effectively to customers’ orders. A project should be introduced for enhancing the development of a unique training program that meets specific criteria in terms of its cost, its duration and its quality (Olateju, Abdul-Azeez, & Alamutu, 2011, p.1). Evaluation of project – Methods In general, the evaluation of projects has three key parts: a) the identification of costs, b) the identification of outputs and c) the comparison of the findings related to the previous two phases (Marieta, Opreana & Pompiliu 2010, p.132...
4 Pages(1000 words)Research Paper

... owned companies operating in the country and abroad for this purpose. But as of now, official government use of private agencies for intelligence gathering is primarily to gather information of terrorist activities. But like private security agencies, there are many companies offering services to non-governmental organizations and individuals to gather intelligence and information on a variety of areas. There are opinions that a private public cooperation be established with regard to official transfer of information gathered by private agencies to government run security agencies (Newburn 279). But since the United States has a long history of providing private intelligence gathering services (popularly known as private detectives...
8 Pages(2000 words)Case Study

Corey, C.W. (2008) states that Africa, like China and India before it, is gradually losing its reputation as a “frontier market” and is becoming a destination for private equity, a top investment banker told the seventh annual African Growth and Opportunity Act (AGOA) Forum July 15. Tom Gibian, chief executive officer of Emerging Capital Partners (ECP), drew parallels between current economic performance across the continent and conditions seen in both China and India as both economies began to take off.  Private equity has been ingrained in the strategy of the asset allocation of institutional investors for a very long time. However, engaging the investors in general in this type of financing has been proved to b...
21 Pages(5250 words)Coursework
sponsored ads
Save Your Time for More Important Things
Let us write or edit the essay on your topic "Public Sector vs. Private Sector" with a personal 20% discount.
GRAB THE BEST PAPER

Let us find you another Essay on topic Public Sector vs. Private Sector for FREE!