Comments (0)
Add to wishlistDelete from wishlist
Cite this document
Summary
The protagonist Okonkwo, despite his fury and apprehensions, completely values the Igbo way of life by which the Umuofia tribe had to stand for. That way of life embodies bravery,…
Download full paperFile format: .doc, available for editing
HIDE THIS PAPERGRAB THE BEST PAPER92.8% of users find it useful 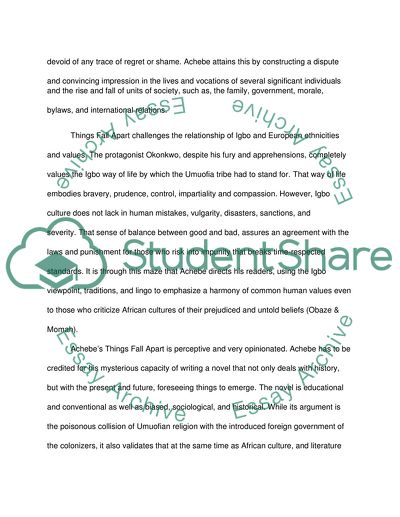 Things Fall Apart by Chinua Achebe Chinua Achebe’s Things Fall Apart tells about the Igbo Land in the eastern part
of Nigeria, in the turn of the twentieth century. This novel visualizes the life of the Igbo
people in Umuofia, its culture, values, beliefs and social structures. Moreover, it gives its
readers a better understanding of the diversities and predicaments between the Igbo
instituted practice and the European traditions. Achebe’s novel does not only dramatize
the whole Igbo civilization. Rather it tells of the Okonkwo’s misfortune. Okonkwo is an
Igbo hero who fights to uphold the cultural dignity of his community in opposition to the
overpowering influence of the colonizers.
Okonkwo stubbornly resists change that he cannot even accept it in others.
Strangely enough, Okonkwo frequently defies the customs of the Igbo natives through
his personal morale of aggression. Consequently, despite the fact that he manages to
reach supremacy in his society, he becomes alienated from that society. The same
values that gave him a heroic status also led to his downfall.
In Things Fall Apart, Okonkwo is portrayed as a perfect Igboman and principally
concerned with the obsession of authority and its impacts among the Igbo tribe. This
novel is a native representation and condemnation of the culture and institutions of a
disparaged people with emphasis on both their strong points and flaws, and
devoid of any trace of regret or shame. Achebe attains this by constructing a dispute
and convincing impression in the lives and vocations of several significant individuals
and the rise and fall of units of society, such as, the family, government, morale,
bylaws, and international relations.

Things Fall Apart challenges the relationship of Igbo and European ethnicities and values. The protagonist Okonkwo, despite his fury and apprehensions, completely values the Igbo way of life by which the Umuofia tribe had to stand for. That way of life embodies bravery, prudence, control, impartiality and compassion. However, Igbo culture does not lack in human mistakes, vulgarity, disasters, sanctions, and severity. That sense of balance between good and bad, assures an agreement with the laws and punishment for those who risk into impunity that breaks time-respected standards. It is through this maze that Achebe directs his readers, using the Igbo viewpoint, traditions, and lingo to emphasize a harmony of common human values even to those who criticize African cultures of their prejudiced and untold beliefs (Obaze & Momah).
Achebe’s Things Fall Apart is perceptive and very opinionated. Achebe has to be credited for his mysterious capacity of writing a novel that not only deals with history, but with the present and future, foreseeing things to emerge. The novel is educational and conventional as well as biased, sociological, and historical. While its argument is the poisonous collision of Umuofian religion with the introduced foreign government of the colonizers, it also validates that at the same time as African culture, and literature may have been manipulated by European culture, similarly, European culture has also gained from African cultures (Obaze & Momah).
Captivating as it is, the novel’s title of Things Fall Apart is confusing, for the reason that Umuofia does not really fall apart. It does not stand with Okonkwo and oppose change with hostilities, but fittingly adjusts for survival. Umuofia people or Igbo tribe are constantly searching the common sense of what they do and why, measuring up to the neighboring communities, and history. In Things Fall Apart, the only thing that falls apart is Okonkwos life, because of his stubbornness to adapt. The Umuofia people adapts and changes with the world, unlike Okonkwo who prefers to stay behind and perish.

...?Things fall Apart Introduction Things Fall Apart, ed by Chinua Achebe, is an African prose that narrates the transition from a pre-colonial era to the colonial era. The novel addresses the crisis of African cultural collapse during the colonial rule. It concerns the traditional Igbo life prior to the advent of the missionaries and colonial government and the reaction of the Igbo people to the new order imposed by the missionaries and the colonial government. Okonkwo, the principal character, inability to accept the new order, in the face of the already collapsed Igbo culture brought him down. Nwoye, Okonkwo’s oldest son, was a major character that accepted and embraced the new order to the disappointment of his father. Nwoye... without...
7 Pages(1750 words)Research Paper

...Things Fall Apart “He has put a knife on the things that held us together and we have fallen apart (152).” Explain the significance of this statement. This exchange happens during a chat between Obierika and Okonkwo. The conversation is about different occurrences that have happened in their area since the arrival of colonialists. Obierikas view in the statement is echoing Okonkwo’s own thoughts on colonialism. He is disappointed by the fact that the white men have arrived and sought to change everything in the process disregarding the Igbo sense of Justice, he identifies the impossibility of the colonizers not to understand a thing...
4 Pages(1000 words)Essay

...﻿ Topic: “Things Fall Apart": Book Review Love for truth, painful experiences, sticking to the grassroots realities, imagination based on the practical vision make a brilliant writer. Some write for making a career and some for the sake of upholding the truth and to lend solid support for the common man and societal values. Chinua Achebe is a writer with all the positive qualities clubbed in appropriate proportions. The writings of such writers become a joke to some intellectuals and to the wise ones, they are like scriptural revelations. “Things Fall Apart” is a legacy-defining novel.1890s is the worst period in the history of slavery. Slavery in its most inhuman form is practiced... ! That is...
4 Pages(1000 words)Book Report/Review

...The Power Of Women In Umuofia. The position and image of women in "Things Fall Apart" is an important topic. We could even say that women actually had great power and were revered. One might think that this novel presents women as a sadly oppressed group with no power, but there are several facts, which imply the contrary idea. For instance, women are the primary educators of children. Through story telling and other forms of discourse, they educate and socialize the children, inspiring in them intellectual curiosity about social values, relationships, and the human condition. The stories the women tell also develop the artistic consciousness of the children, in addition to entertaining...
2 Pages(500 words)Book Report/Review

...Paper on: "Discuss Umuofia - in Chinua Achebe's Things Fall Apart - as a village instead of a How does Umuofia teach us about the difference between villages of cities Consider the division of labor (how specialized the different occupations were), the methods of political decision-making, and the organization of their religious life." Instructions: The paper needs to have strong, original main arguments. You should focus on only one specific thing in the main argument. Underline the main argument so that we can see it clearly. It should be only one or two sentences long and it should be in the first paragraph. Cite specific material from the books and...
4 Pages(1000 words)Essay

...Character Analysis of Things Fall Apart The purpose of this essay is to critically examine three characters from the book Things Fall Apart by Chinua Achebe. Gender roles play an important part in this piece and by looking at several characters within the piece, one can see specifically what those gender roles are and what they mean to the book overall. The three distinct characters to be discussed are Okonkwo, Chielo and Nwoye. Okonkwo is the first character to be examined. Okonkwo is the materialization of male dominance in a family setting. He is a successful part of the clan with three wives and many children. The fact that he...
4 Pages(1000 words)Essay

... Things fall apart Okonkwo’s village was called Lbo. It was highly affected by European imperialism in a negative way. When the British intruded the village, they introduced their Western Culture and religion to the community. Everything took a drastic change to the society’s tradition practices and culture. Before the coming of the British, Ibo villagers valued their traditions, beliefs, cultural practices, and lifestyle. The colonialists tried as much as possible to ignore natives’ way of life and introduced their way of living indirectly by introducing schools, religion, hospitals and lifestyle. They knew that they would capture the natives in their trap which was in form of assistance (Okpewho 32). With respect to the coming... , the Lbo...
2 Pages(500 words)Essay

Let us find you another Essay on topic Things Fall Apart for FREE!