Restructuring in business portfolio or its financing - Essay Example

Comments (0)
Add to wishlistDelete from wishlist
Cite this document
Summary
They are particularly dedicated to the WHO- World Health Organisation’s three diseases of priority- Malaria, Tuberculosis and HIV/ AIDS. This…
Download full paperFile format: .doc, available for editing
HIDE THIS PAPERGRAB THE BEST PAPER94.3% of users find it useful 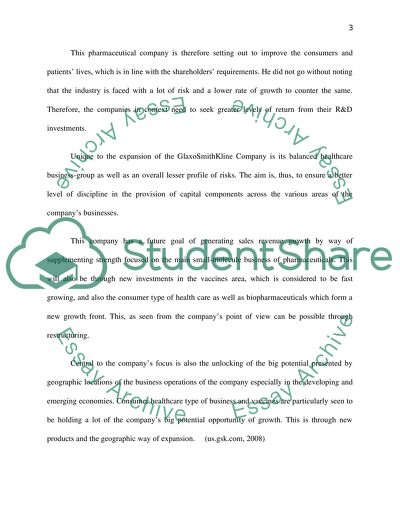 Extract of sample "Restructuring in business portfolio or its financing"

Download file to see previous pages This company has more than 70 establishments in more than 150 countries worldwide. (gsk.com, 2009)
The restructuring of the company’s portfolio or capital structure can be attributed to the strategic priorities it seeks to undertake. As of 2008, the CEO of this company, Andrew Witty, stated that the GlaxoSmithKline Company had three main strategic priorities. The aim of these was to achieve sturdy growth rates, reduce the level of risk as well as improve the performance (financially) in the long-term operations of the business.
According to the CEO, the industry of pharmaceuticals is set to encounter big challenges since there will be an unpredicted number that will lose their patent protection. This, thus, will call for the company to work even harder to fulfill the client demand for brand new types of medicines and those which are better to use. As he states it, the loss of patenting will lead to a number of payers wanting an apt cost-effective kind of healthcare.
This pharmaceutical company is therefore setting out to improve the consumers and patients’ lives, which is in line with the shareholders’ requirements. He did not go without noting that the industry is faced with a lot of risk and a lower rate of growth to counter the same. Therefore, the companies in context need to seek greater levels of return from their R&D investments.
Unique to the expansion of the GlaxoSmithKline Company is its balanced healthcare business-group as well as an overall lesser profile of risks. The aim is, thus, to ensure a better level of discipline in the provision of capital components across the various areas of the company’s businesses.
This company has a future goal of generating sales revenue growth by way of supplementing strength focused on the main small-molecule business of pharmaceuticals. This will also be through new investments in the vaccines area, which is considered to be fast growing, and also the ...Download file to see next pagesRead More
Share:
Tags
Cite this document
(“Restructuring in business portfolio or its financing Essay”, n.d.)
Restructuring in business portfolio or its financing Essay. Retrieved from https://studentshare.org/miscellaneous/1559860-restructuring-in-business-portfolio-or-its-financing

“Restructuring in Business Portfolio or Its Financing Essay”, n.d. https://studentshare.org/miscellaneous/1559860-restructuring-in-business-portfolio-or-its-financing.
Comments (0)
Click to create a comment or rate a document

CHECK THESE SAMPLES OF Restructuring in business portfolio or its financing

A company that is taking shape in the global market is Wal – Mart a superstore that is known for low prices on a variety of products. Consumers that are familiar with Wal – Mart often attribute the products offered by this corporation as convenient, easy to use and at lower prices than other stores. However, there are also continuous questions of how the employees, suppliers, and customers are treated when looking at ethical considerations. One of the common problems that many ha...
6 Pages(1500 words)Case Study
sponsored ads
Save Your Time for More Important Things
Let us write or edit the essay on your topic "Restructuring in business portfolio or its financing" with a personal 20% discount.
GRAB THE BEST PAPER

Let us find you another Essay on topic Restructuring in business portfolio or its financing for FREE!