Comments (0)
Add to wishlistDelete from wishlist
Cite this document
Summary
This cause was used by the British as a tool to establish their liberality, signifying their superiority over the local masses, and to legitimize their rule. They had…
Download full paperFile format: .doc, available for editing
HIDE THIS PAPERGRAB THE BEST PAPER98.7% of users find it useful 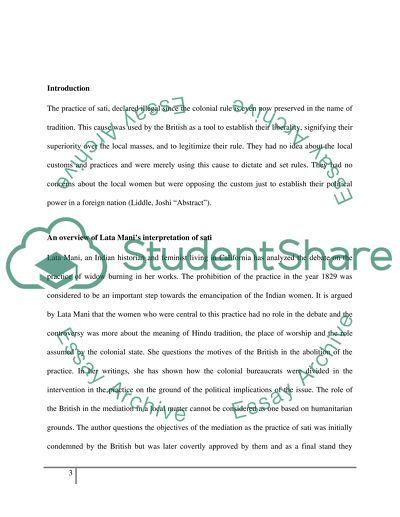 Extract of sample "Imagining the Nation in British India"

Download file to see previous pages The prohibition of the practice in the year 1829 was considered to be an important step towards the emancipation of the Indian women. It is argued by Lata Mani that the women who were central to this practice had no role in the debate and the controversy was more about the meaning of Hindu tradition, the place of worship and the role assumed by the colonial state. She questions the motives of the British in the abolition of the practice. In her writings, she has shown how the colonial bureaucrats were divided in the intervention in the practice on the ground of the political implications of the issue. The role of the British in the mediation in a local matter cannot be considered as one based on humanitarian grounds. The author questions the objectives of the mediation as the practice of sati was initially condemned by the British but was later covertly approved by them and as a final stand they banned the practice officially. This transformation of stand only proves the views of the author that the acts of the British were not one based on humanity but were influenced by vested interests. When they understood that the open denouncement can cost them politically they approved it but later on in a bid to establish their political supremacy in a foreign country they banned the practice.
Lata has also highlighted the scriptural interpretation related to widowhood. She explains how Rammohun Roy, a nineteenth-century noted Bengali reformer, interpreted the scriptures. The scriptures refer to the prescriptive tests that describe the rules of social living. Lata viewed these interpretations as an understanding mode that developed side by side along the colonial rule. Rammohun Roy highlighted that as per the brahmanic scriptures the sati can only be voluntary without any coercion. In her work she has also tried to draw attention to the role of Walter ...Download file to see next pagesRead More
Share:
Tags
Cite this document
(“Imagining the Nation in British India Term Paper”, n.d.)
Imagining the Nation in British India Term Paper. Retrieved from https://studentshare.org/miscellaneous/1559400-imagining-the-nation-in-british-india

CHECK THESE SAMPLES OF Imagining the Nation in British India

The Birth of a Nation by D.W. Griffith

...The birth of a Nation is a silent film that is directed by D. W. Griffith in the year 1915, which is based on when America went through a civil war, as well as the aftermath that occurred thereafter. It was inspired by The Clansman, which is also a novel and play. This film is quite well known for its awesome effects, camera tricks, and its lighting, and it also caused a great deal of controversy in that it positively portrays the Ku Klux Klan (American Movie Classics Company LLC). Griffith is quite creative in how he transforms the military opposition between the North and South to the opposition between Blacks and Whites. The film begins during the prewar times. The American civil war has not yet begun. The film turns its focus on two...
6 Pages(1500 words)Movie Review

This paper briefly explains the importance of Europe and India in the current world and the mutual economic cooperation between these two regions.
I have used only secondary sources for conducting this research. I have taken ideas from reputed electronic references like JSTOR, Wall Street Journal, BusinessWeek, etc and also from articles written by many reputed authors like Dr. Singh, Gupta, Gabriel Rozman, etc. I tried to find similar arguments in these articles in order to strengthen the claims presented in this paper. Moreover, I tried to explore diverse areas of cooperation between Europe and India in order to write a multifaceted article. I tried to analyze and interpret the ideas taken from the references meaningfully i...
6 Pages(1500 words)Research Proposal
sponsored ads
Save Your Time for More Important Things
Let us write or edit the term paper on your topic "Imagining the Nation in British India" with a personal 20% discount.
GRAB THE BEST PAPER

Let us find you another Term Paper on topic Imagining the Nation in British India for FREE!