Comments (0)
Add to wishlistDelete from wishlist
Cite this document
Summary
A scalar quantity is fully described or specified using its magnitude or value. For example one has to specify mass of a ball; then saying 2 kg would suffice. Similarly, distance traveled by a person in his morning walk will be a few kilometers. It is not at all required…
Download full paperFile format: .doc, available for editing
HIDE THIS PAPERGRAB THE BEST PAPER99% of users find it useful 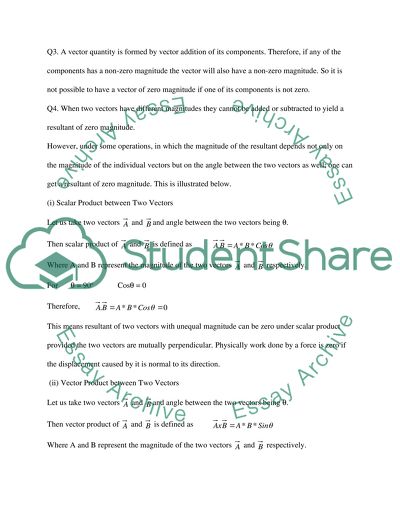 Download file to see previous pages Q2. A scalar quantity can be either negative or zero or positive. This depends on choice of the reference point or zero point. Choice of reference or zero comes from convention and / or convenience. Suppose someone is conduction an experiment and observing some change with time; then he can choose zero time as per his convenience and there is nothing that can bar his choice of zero or reference point for time, if some choice of zero reference point is offering him some convenience in formulating some equation or like that he is free to choose it. Once he has assigned some zero or reference point for time, the time corresponding to all the preceding events becomes zero. In fact we write 1999 AD which is nothing but +1999 year and similarly a date like 530 BC is as good as -530 years.
Similarly, another scalar quantity temperature is often measured in negative with melting point of ice being 0o Celsius and all the temperatures below it being negative temperatures. Similarly one can find many instances where scalar quantities are have negative values.
Q3. A vector quantity is formed by vector addition of its components. Therefore, if any of the components has a non-zero magnitude the vector will also have a non-zero magnitude. So it is not possible to have a vector of zero magnitude if one of its components is not zero.
However, under some operations, in which the magnitude of the resultant depends not only on the magnitude of the individual vectors but on the angle between the two vectors as well; one can get a resultant of zero magnitude. This is illustrated below.
This means resultant of two vectors with unequal magnitude can be zero under scalar product provided the two vectors are mutually perpendicular. Physically work done by a force is zero if the displacement caused by it is normal to its direction.
This means resultant of two vectors with unequal magnitude can be ...Download file to see next pagesRead More
Share:
Tags
Cite this document
(“Calculus project Lab Report Example | Topics and Well Written Essays - 1000 words”, n.d.)
Calculus project Lab Report Example | Topics and Well Written Essays - 1000 words. Retrieved from https://studentshare.org/miscellaneous/1558788-calculus-project

CHECK THESE SAMPLES OF Calculus project

Civil Aviation Administration of China (CAAC) – undoubtedly advanc...
7 Pages(1750 words)Assignment
sponsored ads
Save Your Time for More Important Things
Let us write or edit the lab report on your topic "Calculus project" with a personal 20% discount.
GRAB THE BEST PAPER

Let us find you another Lab Report on topic Calculus project for FREE!