Comments (0)
Add to wishlistDelete from wishlist
Cite this document
Summary
Local customs, traditions and mores must be recognized. But honesty cannot be criticized in any culture. Dishonesty simply results in demoralizing and reprehensible judgment. A well-founded reputation for…
Download full paperFile format: .doc, available for editing
HIDE THIS PAPERGRAB THE BEST PAPER95% of users find it useful 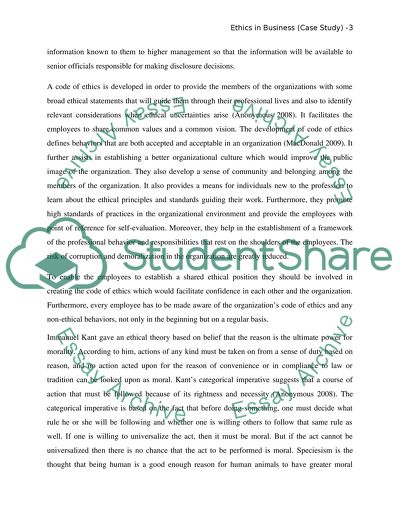 ETHICS IN BUSINESS (CASE STUDY) By Presented to s The organization maintains policies and procedures that represent the code of ethics for the Chief Executive Office (CEO), officers and employees.
The policy of our organization is to comply with all governmental laws, rules, and regulations applicable to our business.
The aim of the organization is to choose the course of highest integrity. Local customs, traditions and mores must be recognized. But honesty cannot be criticized in any culture. Dishonesty simply results in demoralizing and reprehensible judgment. A well-founded reputation for conscientious transactions is itself an invaluable organizational asset.
The organization cares how results are obtained, not just that they are obtained. CEO, officers, employees should fairly with each other and with the organization’s suppliers, customers, competitors and other third parties.
The organization expects compliance with its standards of integrity throughout the organization and will not tolerate employees who achieve results at the cost of violation of law or who deal unscrupulously.
It is the policy of the organization that all transactions will be accurately reflected in its books and records by the employees. This, of course, means that falsification of books and records and the creation and maintenance of any off-the record bank accounts are strictly prohibited.
The organization anticipates sincerity from employees at all points and observance to its regulations and internal controls. A negativity which might result when the employees obscure information from the organization’s officials or the auditors is that other employees might get an idea that the organizational policies and internal controls can be overlooked when they are problematic.
It is the corporation’s policy to make full, fair, accurate, timely and understandable disclosure in reports and documents that the corporation files with the Securities and Exchange Commission and in other public communications. All employees are responsible for reporting material information known to them to higher management so that the information will be available to senior officials responsible for making disclosure decisions.
A code of ethics is developed in order to provide the members of the organizations with some broad ethical statements that will guide them through their professional lives and also to identify relevant considerations when ethical uncertainties arise (Anonymous 2008). It facilitates the employees to share common values and a common vision. The development of code of ethics defines behaviors that are both accepted and acceptable in an organization (MacDonald 2009). It further assists in establishing a better organizational culture which would improve the public image of the organization. They also develop a sense of community and belonging among the members of the organization. It also provides a means for individuals new to the profession to learn about the ethical principles and standards guiding their work. Furthermore, they promote high standards of practices in the organizational environment and provide the employees with point of reference for self-evaluation. Moreover, they help in the establishment of a framework of the professional behavior and responsibilities that rest on the shoulders of the employees. The risk of corruption and demoralization in the organization are greatly reduced.
To enable the employees to establish a shared ethical position they should be involved in creating the code of ethics which would facilitate confidence in each other and the organization. Furthermore, every employee has to be made aware of the organization’s code of ethics and any non-ethical behaviors, not only in the beginning but on a regular basis.
Immanuel Kant gave an ethical theory based on belief that the reason is the ultimate power for morality. According to him, actions of any kind must be taken on from a sense of duty based on reason, and no action acted upon for the reason of convenience or in compliance to law or tradition can be looked upon as moral. Kant’s categorical imperative suggests that a course of action that must be followed because of its rightness and necessity (Anonymous 2008). The categorical imperative is based on the fact that before doing something, one must decide what rule he or she will be following and whether one is willing others to follow that same rule as well. If one is willing to universalize the act, then it must be moral. But if the act cannot be universalized then there is no chance that the act to be performed is moral. Speciesism is the thought that being human is a good enough reason for human animals to have greater moral rights than non-human animals (BBC 2009). According to Kant, there is nothing wrong with Speciesism because either God or the categorical imperative says it is right, and this the proof enough for them.
REFERENCES
Anonymous, 2008. Business code of ethics. Available at: http://www.rezgo.com/legal/business-code-of-ethics [Accessed 22 October 2009]
Anonymous, 2008. Kant: Theory in detail. Available at: http://www.rsrevision.com/Alevel/
ethics/kant/index.htm [Accessed 22 October 2009]
BBC, 2009. Religion and ethics-ethical issues. Available at: http://www.bbc.co.uk/ethics/ rights/speciesism.shtml [Accessed 22 October 2009]
MacDonald, C, 2009. Why have a code of ethics? Available at: http://www.ethicsweb.ca/codes/ coe2.htm [Accessed 22 October 2009] Read More
Share:
Tags
Cite this document
(“Ethics in business (case study) Essay Example | Topics and Well Written Essays - 500 words”, n.d.)
Ethics in business (case study) Essay Example | Topics and Well Written Essays - 500 words. Retrieved from https://studentshare.org/miscellaneous/1558535-ethics-in-business-case-study

CHECK THESE SAMPLES OF Ethics in business (case study)

...). Business Ethics:Managing Corporate Citizenship and Sustainability in the Age of Globalization. Oxford University Press. The article explores the implications of foremost challenges facing corporations, and corporate citizenship in terms of what can be well thought-out as morally right and wrong in the way businesses make decisions and conduct their activities. The article has been used to provide the ideals that Lay owed to his employees. It has also been used to demonstrate that the virtual ethics ideals desired by the shareholder is that they had to be considered in most of the major decisions Lay made in terms of the most drastic and unusual investment ever undertaken by a...
4 Pages(1000 words)Research Paper

...not exist. The brokers got paid more because they were creating a fake market. They would push the sales of the fake stocks, when they stop pushing sales the price of the stock would crash. J.T. Marlin broke a lot of laws with a fraudulent money laundering scheme. They raised people’s hopes of making money selling the customers fake stocks. One particular GAAP they did not follow was the continuing concern concept. The continuing concern concept assumes that business will continue to operate, unless it is known that such is not the case. The company knew the stocks they were selling were companies not even operating, thus the continuing concern concept was broken. Some of the stakeholders affected...
4 Pages(1000 words)Essay

...about other related terms such as values and morals. Values refer to the core beliefs of what is desirable in an organization. Values considerably affect the choices made in business decisions, which further includes the aspects of ethics or morals. This paper does not aim to distinguish the definitions of ethics or morals. In short, both ‘ethics’ and ‘morals’ signify the codes of conduct that distinguish between right and wrong. In an organizational culture, business decisions are (and should be) made on the basis of the moral codes defined by itself. In case of ethical decision making, companies develop organizational...
4 Pages(1000 words)Essay

...﻿Business ethics case study Introduction: The term ‘business ethics’ is considered as one of the most significant aspects in corporate environments. It can be generally defined as the behavior adopted by a business to deal with its daily handlings. The term ’ethics’ is derived from the Greek word ’ethos’ signifying habitual conduct or character. In a wider context, an unethical conduct refers to immoral rule(s) of conduct to which the act of disapproval is more relevant. In terms of an organizational context, it can be argued that business ethics is particularly...
7 Pages(1750 words)Essay

...﻿The Prospects of Business Ethics: Case Study With reference to the case study that has been denoted, this analysis will consider the following factors: identification of key shareholders, identification of key ethical issues, evaluation of the case utilizing two ethical theories, explanation of how the author would have behaved within the given situation, and judgment of whether Tom has acted correctly or incorrectly within the given situation that has been enumerated upon. As a means of understanding and elaborating upon this, key factors of the thought process and decision making regime that Tom adopted throughout the case study will be analyzed along with the motivating factors that eventually spurred him to represent another... he...
7 Pages(1750 words)Essay

...1. American Therapeutic Inc., the entire population of the United s that might one day be prescribed the drug, and the FDA. 2. Priority rank population of individuals that might one day be prescribed the drug, 2) American Therapeutic, 3) FDA 3. Ethical norms and principles were obviously violated by both the CEO of Vegesna and Chang; as both colluded to circumvent the law and engage in bribery as a means of promoting their own self interests above the safety of the population and the system of approval specified by the FDA. 4. The winners in this case were American Therapeutics and the individual Chang. Due to the fact that the drug manufacturer was able to effectively bribe Chang and circumvent the...
2 Pages(500 words)Case Study

...The Beech-Nut Case al Affiliation: The Beech-Nut Case The beach-nut case describes the ethics of different people inthe organization and how their decisions contributed to the crisis in the case. Each party involved made decisions that were influenced by their communication strategies. All the parties influenced the CEO to make a final decision in different ways. Parties involved Peter Anderson was the newly appointed CEO of the Beech nut corporation. He was supposed to revive the profitability of the company by supplying healthy products that would meet the standards set by Nestle. He was supposed to determine whether Beech nut would join PAI in filing a...
2 Pages(500 words)Case Study
sponsored ads
Save Your Time for More Important Things
Let us write or edit the essay on your topic "Ethics in business (case study)" with a personal 20% discount.
GRAB THE BEST PAPER

Let us find you another Essay on topic Ethics in business (case study) for FREE!