Comments (0)
Add to wishlistDelete from wishlist
Cite this document
Summary
Fragile X Syndrome, also known as Martin-Bell Syndrome or Escalante Syndrome, is a genetic syndrome which manifests in a wide range of physical, intellectual, emotional, cognitive and behavioral features that can be either mild or severe. The syndrome is characterized by the…
Download full paperFile format: .doc, available for editing
HIDE THIS PAPERGRAB THE BEST PAPER94.7% of users find it useful 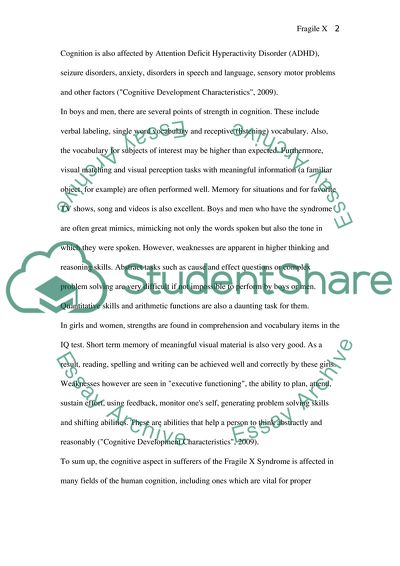 Fragile X Syndrome, also known as Martin-Bell Syndrome or Escalante Syndrome, is a genetic syndrome which manifests in a wide range of physical, intellectual, emotional, cognitive and behavioral features that can be either mild or severe. The syndrome is characterized by the expansion of a single tri-nucleotide gene sequence (CGG) on the X chromosome and results in a failure to express a certain protein (FMR1) which controls the length of the repeated CGG sequence. This failure causes damage to the neural development of the body, including the brain, something which results in cognitive disabilities among others.
Many of the people who suffer from the syndrome have some cognitive weaknesses in their cognitive development, including the processes of thinking, problem solving, concept understanding, information processing and overall intelligence. Their overall potential tends to be lower than that of their peers and siblings, but they can nonetheless have patterns of strength too in their development and do very well in certain aspects of learning and cognition.
As many as 80% of males with the syndrome are described as "cognitively delayed". Older studies suggested that nearly all the boys or men with the syndrome have a moderate or severe mental retardation. Today there is more accuracy in the testing and in recognizing all those with the syndrome (not only those who were institutionalized, on which these previous studies were carried out), and only 10-15% of the males tested have the IQ that fits a borderline or mild mental retardation.
There are a number of boys and girls with the full mutation of the syndrome. They are described as learning disabled, as their overall intelligence is at least at the low average range but they have specific strengths and weaknesses in their cognitive learning ("Cognitive Development Characteristics", 2009).
Cognition is also affected by Attention Deficit Hyperactivity Disorder (ADHD), seizure disorders, anxiety, disorders in speech and language, sensory motor problems and other factors ("Cognitive Development Characteristics", 2009).
In boys and men, there are several points of strength in cognition. These include verbal labeling, single word vocabulary and receptive (listening) vocabulary. Also, the vocabulary for subjects of interest may be higher than expected. Furthermore, visual matching and visual perception tasks with meaningful information (a familiar object, for example) are often performed well. Memory for situations and for favorite TV shows, song and videos is also excellent. Boys and men who have the syndrome are often great mimics, mimicking not only the words spoken but also the tone in which they were spoken. However, weaknesses are apparent in higher thinking and reasoning skills. Abstract tasks such as cause and effect questions or complex problem solving are very difficult if not impossible to perform by boys or men. Quantitative skills and arithmetic functions are also a daunting task for them.
In girls and women, strengths are found in comprehension and vocabulary items in the IQ test. Short term memory of meaningful visual material is also very good. As a result, reading, spelling and writing can be achieved well and correctly by these girls. Weaknesses however are seen in "executive functioning", the ability to plan, attend, sustain effort, using feedback, monitor ones self, generating problem solving skills and shifting abilities. These are abilities that help a person to think abstractly and reasonably ("Cognitive Development Characteristics", 2009).
To sum up, the cognitive aspect in sufferers of the Fragile X Syndrome is affected in many fields of the human cognition, including ones which are vital for proper learning, understanding and making sense of ones environment. Be that as it may, sufferers also have strong compensatory abilities which help them function properly.
References
"Cognitive Development Characteristics" (2009). The National Fragile X Foundation Website. Retrieved October 15, 2009 from http://fragilex.org/html/cognitive.htm Read More
Share:
Tags
Cite this document
(“Fragile X Syndrome PowerPoint Presentation Example | Topics and Well Written Essays - 500 words”, n.d.)
Fragile X Syndrome PowerPoint Presentation Example | Topics and Well Written Essays - 500 words. Retrieved from https://studentshare.org/miscellaneous/1558469-fragile-x-syndrome

... behaviors. These behaviors can be prevented by putting them under constant supervision and removing sharp objects from their surroundings (Hagerman & Hagerman, 2002). Medical care Diagnosis of this condition includes DNA testing. This DNA testing is aimed at typing for the fragile X syndrome. Karyotyping should also be done and it might lead to finding of other chromosomal abnormalities in the patient since most of these recessive disorders often present with other developmental abnormalities. Molecular genetic techniques must be applied to look detect for the presence of FMR1gene.Other diagnostic tools include amniocentesis and prenatal testing using chorionic villus sampling technique. These methods allow for the diagnosis of FMR1...
3 Pages(750 words)Essay

First and foremost, prosopagnosia is a disorder classically characterized as an inability to visually recognize faces despite otherwise normal visual and mental function (Caldara, Schyns, Mayer, Smith, Gosselin & Rossion, 2005). One of the defining characteristics of the disorder is that the individual is able to recognize people via other cues: such as voice or other visual traits (e.g., size, gait, mannerism, clothes, hairstyle, or even facial features (mustache, scar, blemish, or even style of make-up)). Such findings illustrate that individuals with prosopagnosia typically have otherwise intact visual and mental functioning. For example, individuals with prosopagnosia, in general, are able to make fine visual discriminatio...
7 Pages(1750 words)Term Paper

While we know that alcohol negatively affects the child before birth, the exact biological and chemical process is still being studied (Day, 1992).

Classified as ICD-9 and ICD-10 under the International Statistical Classification of Diseases and Related Health Problems, Fetal Alcohol Syndrome is a manifestation of permanent birth defects that are observed in the children of women who consume alcohol during pregnancy. As reported by Forrest and Florey (1991) as well as Day (1992), the level of consumption or the frequency of alcohol use while a woman is pregnant has an uncertain effect in the amount of damage that can be done to the fetus. Therefore, while the effects before birth are being studied, it becomes an importa...

...Lennox Gastaut syndrome Background Epilepsy is considered as one of the first brain disorders that were known to man. More than 3,000 years ago, the term was cited in ancient Babylon. In this society, the queer behaviors and actions brought about by seizures added to many superstitions and ostracism. However, in 400 B.C, Hippocrates wrote the first ever book which featured epilepsy entitled “On the Sacred Disease”. In Hippocrates’ time, epilepsy was known to be a curse. In his book, Hippocrates lent evidence suggesting that epilepsy is a brain disorder and not otherwise (Beaumanoir, 1982). In 70 A.D literature, in the Gospel according to Mark (9:14-29), Jesus was said to have casted out an evil spirit from a man with such condition...
8 Pages(2000 words)Case Study

People are not just a “resource”. Each person is a complicated web of likes, dislikes, ambitions, fears, interests, passions – in short, every imaginable sentiment and belief. While it is true that people respond to a degree to external pressure, there is a point at which they will only act when they are personally convinced of the usefulness and rightness of their actions.
In an attempt to understand in a scientific way the principles by which people may be motivated, a man named Douglas McGregor had formulated a theory on human resource motivation. This is known as the principle of Theory X and Theory Y.
Almost 50 years ago, in 1960, Douglas McGregor began a debate when a published his book entitled T...
10 Pages(2500 words)Literature review

...DOES MYALGIC ENCEPHALOMYELITIS (ME) EXIST? By of the of the of the School 14 July Introduction In our day to day lives, we get tired. Depression is part of life, but the mystery of chronic fatigue syndrome is that it is not what we experience on a daily basis. The earliest trait of this illness is pronounced fatigue that is sudden and characterized by relentless or deterioration, causing an early and easy exhaustion as well the feeling of hangovers by someone who apparently has no reason for the feeling. Myalgic Encephalomyelitis is an incapacitating disorder and is also known as the Chronic Fatigue Syndrome. It is known to affect both the physical and psychological functions of the body. For a long time, the condition had not been...
8 Pages(2000 words)Case Study
sponsored ads
Save Your Time for More Important Things
Let us write or edit the powerpoint presentation on your topic "Fragile X Syndrome" with a personal 20% discount.
GRAB THE BEST PAPER

Let us find you another PowerPoint Presentation on topic Fragile X Syndrome for FREE!