Comments (0)
Add to wishlistDelete from wishlist
Cite this document
Summary
Since the advent of the introduction of the Internet about 40 years ago, the propagation of the Internet—its spread throughout foreign countries across the globe—has increased dramatically and shows no signs of slowing. Internet usage in Iraq today is not as prevalent as it…
Download full paperFile format: .doc, available for editing
HIDE THIS PAPERGRAB THE BEST PAPER93.2% of users find it useful 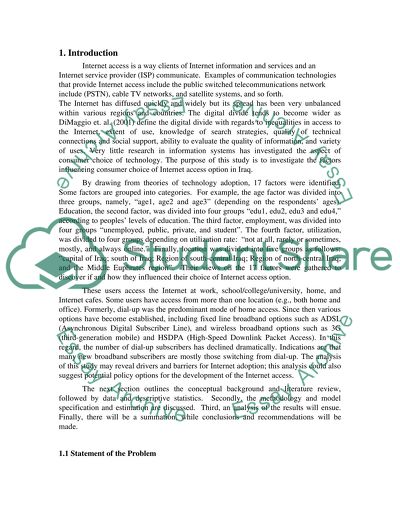 Download file to see previous pages This chapter is mainly concerned with the modes of use of Internet connections in Iraq. Some people choose to access the Internet from Internet cafes, some from home, some from work, and other from a combination of modes. There are several determinants of Internet use in Iraq, namely, age, education, employment, utilization, and location. Through use of the multinomial probit function in statistics, these variables will be analyzed in order to more appropriately determine their numerical values and relevancy.
Internet access is a way clients of Internet information and services and an Internet service provider (ISP) communicate. Examples of communication technologies that provide Internet access include the public switched telecommunications network include (PSTN), cable TV networks, and satellite systems, and so forth.
The Internet has diffused quickly and widely but its spread has been very unbalanced within various regions and countries. The digital divide tends to become wider as DiMaggio et. al. (2001) define the digital divide with regards to inequalities in access to the Internet, extent of use, knowledge of search strategies, quality of technical connections and social support, ability to evaluate the quality of information, and variety of uses. Very little research in information systems has investigated the aspect of consumer choice of technology. The purpose of this study is to investigate the factors influencing consumer choice of Internet access option in Iraq.
By drawing from theories of technology adoption, 17 factors were identified. Some factors are grouped into categories. For example, the age factor was divided into three groups, namely, “age1, age2 and age3” (depending on the respondents’ ages). Education, the second factor, was divided into four groups “edu1, edu2, edu3 and edu4,” according to peoples’ levels of education. The third factor, ...Download file to see next pagesRead More
Share:
Cite this document
(“Determinants of Internet Use in Iraq-Estimate multinomial probit of Essay”, n.d.)
Determinants of Internet Use in Iraq-Estimate multinomial probit of Essay. Retrieved from https://studentshare.org/miscellaneous/1558251-determinants-of-internet-use-in-iraq-estimate-multinomial-probit-of-choices-of-internet-modes

“Determinants of Internet Use in Iraq-Estimate Multinomial Probit of Essay”, n.d. https://studentshare.org/miscellaneous/1558251-determinants-of-internet-use-in-iraq-estimate-multinomial-probit-of-choices-of-internet-modes.
Comments (0)
Click to create a comment or rate a document

Technology...
10 Pages(2500 words)Essay
sponsored ads
Save Your Time for More Important Things
Let us write or edit the essay on your topic "Determinants of Internet Use in Iraq-Estimate multinomial probit of choices of Internet modes" with a personal 20% discount.
GRAB THE BEST PAPER

Let us find you another Essay on topic Determinants of Internet Use in Iraq-Estimate multinomial probit of choices of Internet modes for FREE!