Comments (0)
Add to wishlistDelete from wishlist
Cite this document
Summary
It is the name of a land rich in culture, beautiful scenery, exotic wines and heavenly cuisine. Western and Eastern divide brings a variety of distinctive taste, customs, living and traditions. Yet, a national culinary art has its own identity and distinctiveness which…
Download full paperFile format: .doc, available for editing
HIDE THIS PAPERGRAB THE BEST PAPER98.8% of users find it useful 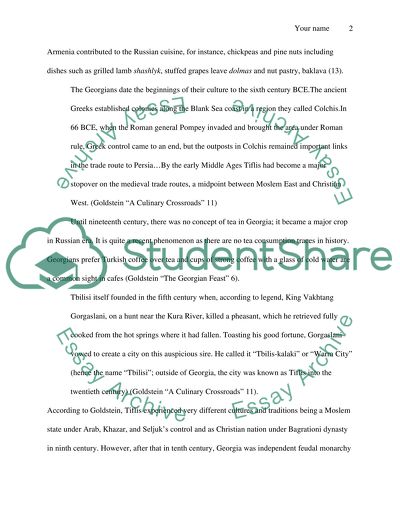 Download file to see previous pages a Christian nation, Georgia has historically looked more often to the West-so much so that the capital city of Tiflis (Tbilisi) was once known as the Paris of the Caucasus. Lying athwart the major trade routes between East and West, Tiflis maintained a grand caravanserai where merchants could stable their animals, store their wares, and themselves find shelter. Thanks to its agriculture riches and long tradition of hospitality, Georgia was an object of desire for many outsiders, not all of whom were good guests. (“A Culinary Crossroads” 11)
Georgian cuisine is not only influenced by Middle Eastern and European but it also influenced different neighboring and invading nations. According to Plotkin and Gregory, Georgia and Armenia contributed to the Russian cuisine, for instance, chickpeas and pine nuts including dishes such as grilled lamb shashlyk, stuffed grapes leave dolmas and nut pastry, baklava (13).
The Georgians date the beginnings of their culture to the sixth century BCE.The ancient Greeks established colonies along the Blank Sea coast in a region they called Colchis.In 66 BCE, when the Roman general Pompey invaded and brought the area under Roman rule, Greek control came to an end, but the outposts in Colchis remained important links in the trade route to Persia…By the early Middle Ages Tiflis had become a major stopover on the medieval trade routes, a midpoint between Moslem East and Christian West. (Goldstein “A Culinary Crossroads” 11)
Until nineteenth century, there was no concept of tea in Georgia; it became a major crop in Russian era. It is quite a recent phenomenon as there are no tea consumption traces in history. Georgians prefer Turkish coffee over tea and cups of strong coffee with a glass of cold water are a common sight in cafes (Goldstein “The Georgian Feast” 6).
Tbilisi itself founded in the fifth century when, according to legend, King Vakhtang Gorgaslani, on a hunt near the Kura River, killed a pheasant, which he ...Download file to see next pagesRead More
Share:
Tags
Cite this document
(“Culinary history of Georgia Essay Example | Topics and Well Written Essays - 2500 words”, n.d.)
Culinary history of Georgia Essay Example | Topics and Well Written Essays - 2500 words. Retrieved from https://studentshare.org/miscellaneous/1557426-culinary-history-of-georgia

CHECK THESE SAMPLES OF Culinary history of Georgia

Driving Under the Influence in Georgia

By the end of the late 1970s, driving under the influence was recognized more and more as a crime, and pressure from groups such as MADD (Mothers Against Drunk Driving) and SADD (Students Against Drunk Driving) tightened and refined the laws regarding intoxicated driving.
The legal level of intoxication dropped from a BAC (blood alcohol concentration) of .15 down to .10. This limit has since dropped to .08, although zero-tolerance laws can make it a crime to drive with a BAC of .02 or less, depending on the circumstances. Automatic suspension of the driver’s license has been added, and while penalties vary somewhat from state to state, the vehicle may be immediately seized; the person jailed for 15-30 days and required...
9 Pages(2250 words)Case Study

As a result, there is considerable debate over whether world economies will gravitate toward adopting a common Anglo-American corporate governance structure or will...
84 Pages(21000 words)Dissertation
sponsored ads
Save Your Time for More Important Things
Let us write or edit the essay on your topic "Culinary history of Georgia" with a personal 20% discount.
GRAB THE BEST PAPER

Let us find you another Essay on topic Culinary history of Georgia for FREE!