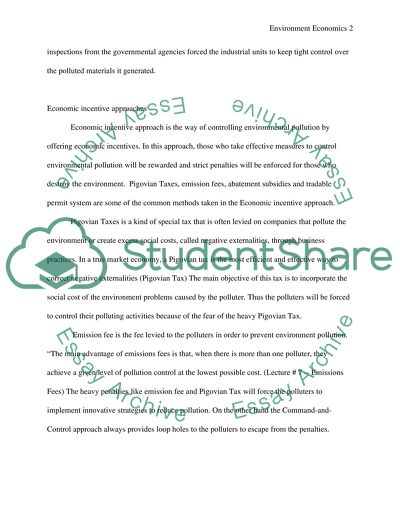 Download file to see previous pages This paper compares Command-and-Control and Economic Incentive approaches.
"Command and control" regulations focus on preventing environmental problems by specifying how a company will manage a pollution-generating process” (Stuart) In this type of approach to regulation of pollution, the companies which are responsible for pollution should take necessary precautions to prevent the environment pollution due to their activities. For example, industrial units mostly produce lot of toxic gases and solid wastes which generally they disposed to the land or sea improperly. Waste treatment plants are made compulsory with every industrial unit by implementing "Command and control" regulations. Command and control approaches were effective up to certain extent to reduce the industrial pollution. Periodical inspections from the governmental agencies forced the industrial units to keep tight control over the polluted materials it generated.
Economic incentive approach is the way of controlling environmental pollution by offering economic incentives. In this approach, those who take effective measures to control environmental pollution will be rewarded and strict penalties will be enforced for those who destroy the environment. Pigovian Taxes, emission fees, abatement subsidies and tradable permit system are some of the common methods taken in the Economic incentive approach.
Pigovian Taxes is a kind of special tax that is often levied on companies that pollute the environment or create excess social costs, called negative externalities, through business practices. In a true market economy, a Pigovian tax is the most efficient and effective way to correct negative externalities (Pigovian Tax) The main objective of this tax is to incorporate the social cost of the environment problems caused by the polluter. Thus the polluters will be forced to control their polluting activities because of the fear of the heavy Pigovian ...Download file to see next pagesRead More
Share:
Tags
Cite this document
(“Environmental Economics Essay Example | Topics and Well Written Essays - 1000 words - 4”, n.d.)
Environmental Economics Essay Example | Topics and Well Written Essays - 1000 words - 4. Retrieved from https://studentshare.org/miscellaneous/1557377-environmental-economics

CHECK THESE SAMPLES OF Environmental Economics

Their focus is on protecting the environment from damage caused by human activities. Their first direct action campaign was to protest nuclear testing off of the coast of Alaska. This first engagement would set the tone for all Greenpeace activities down to this day. Instead of protesting from afar, the activists on this mission were willing to put themselves in harm’s way. This type of direct confrontation has become a hallmark for Greenpeace.

Today, Greenpeace has expanded its efforts to less confrontational activities such as education initiatives in schools and lobbying government officials and MPs. But their daring confrontations still continue. Much of their efforts today are more of the “name and sham...
6 Pages(1500 words)Essay

Examp...
6 Pages(1500 words)Assignment
sponsored ads
Save Your Time for More Important Things
Let us write or edit the essay on your topic "Environmental Economics" with a personal 20% discount.
GRAB THE BEST PAPER

Let us find you another Essay on topic Environmental Economics for FREE!