Comments (0)
Add to wishlistDelete from wishlist
Cite this document
Summary
Healthcare services is facing stiff challenges in most of the countries because of the shortage of quality healthcare professionals, lack of facilities in the health care institutions increasing expenses and population. Moreover, therapists and pharmaceutical companies exploit…
Download full paperFile format: .doc, available for editing
HIDE THIS PAPERGRAB THE BEST PAPER92.1% of users find it useful 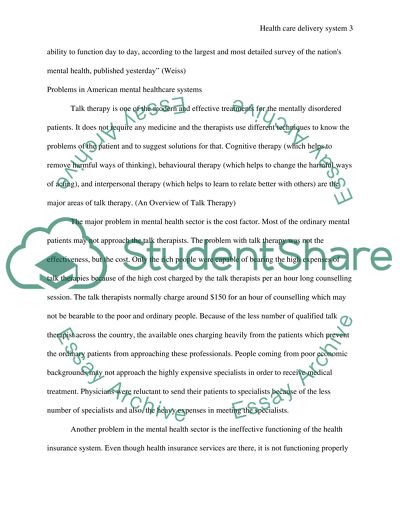 Extract of sample "Problems in the health care delivery system"

Download file to see previous pages This paper analyses the problems in healthcare delivery systems for mentally ill patients.
“More than 20 million people in the United States live in areas that have a shortage of physicians to meet their basic health care needs. This lack of access to quality health care for many people, particularly those living in rural and urban underserved communities, is a serious health care problem” (AMSA Foundation) Population increase and lack of health care staff are some of the major reasons for the health care problems in America. Medical expenses are increasing everyday and the government policies in health care insurances are not adequate to meet the demands of the patients. Mental health care is one of the critical sectors in healthcare industry and it is perhaps one of the worst affected one as far as problems and exploitations are concerned. “One-quarter of all Americans met the criteria for having a mental illness within the past year, and fully a quarter of those had a "serious" disorder that significantly disrupted their ability to function day to day, according to the largest and most detailed survey of the nations mental health, published yesterday” (Weiss)
Talk therapy is one of the modern and effective treatments for the mentally disordered patients. It does not require any medicine and the therapists use different techniques to know the problems of the patient and to suggest solutions for that. Cognitive therapy (which helps to remove harmful ways of thinking), behavioural therapy (which helps to change the harmful ways of acting), and interpersonal therapy (which helps to learn to relate better with others) are the major areas of talk therapy. (An Overview of Talk Therapy)
The major problem in mental health sector is the cost factor. Most of the ordinary mental patients may not approach the talk therapists. The problem with talk therapy was not the effectiveness, but the cost. ...Download file to see next pagesRead More
Share:
Tags
Cite this document
(“Problems in the health care delivery system Essay”, n.d.)
Retrieved from https://studentshare.org/miscellaneous/1557064-problems-in-the-health-care-delivery-system

“Problems in the Health Care Delivery System Essay”, n.d. https://studentshare.org/miscellaneous/1557064-problems-in-the-health-care-delivery-system.
Comments (0)
Click to create a comment or rate a document

CHECK THESE SAMPLES OF Problems in the health care delivery system

Each of the members shall, thus, introduce themselves in terms of their educational background and personal experiences for familiarity purposes. Let us begin with Mr. Colbert.
Colbert: I work at Quad Enterprises in the HRM department as the chief manager. I am overly concerned with the current juvenile justice system, bearing in mind that numerous people have debated upon it since time immemorial. I take a categorical interest in this issue since I have been a victim of juvenile violence. My opinion regarding the current trends in this law field is nobly affirmative. The current juvenile system is perfect. Thank you.
Amanda: I currently am a Law lecturer at a University. I am extremely interested in this issue too. My e...
7 Pages(1750 words)Essay
sponsored ads
Save Your Time for More Important Things
Let us write or edit the essay on your topic "Problems in the health care delivery system" with a personal 20% discount.
GRAB THE BEST PAPER

Let us find you another Essay on topic Problems in the health care delivery system for FREE!