Comments (0)
Add to wishlistDelete from wishlist
Cite this document
Summary
International Joint ventures between companies of developing countries and international organizations offer significant benefits as both domestic as well as international firms tend to benefit from comparative advantage of each other. International joint ventures are often made…
Download full paperFile format: .doc, available for editing
HIDE THIS PAPERGRAB THE BEST PAPER96.9% of users find it useful 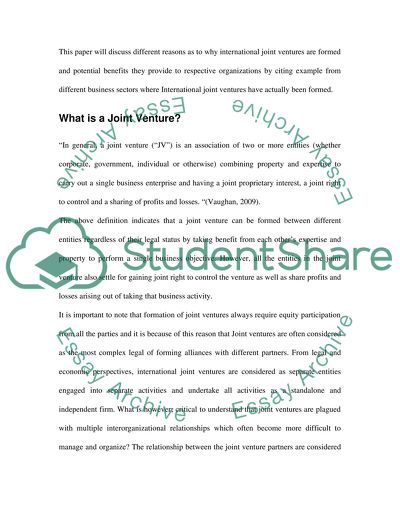 Download file to see previous pages ventures are often formed between two entities to achieve certain economic objective and after achievement of such objectives they are often liquidated. Joint ventures are common in different industries and are formed for different purposes as all the parties to the Joint venture contribute one way or another for the purpose of achieving the objective. Joint ventures are therefore important in the sense that their formation allows companies to utilize each other’s strengths in achieving the desired strategic objectives.
There are various benefits that organizations can derive from join ventures including sharing of technology and R&D facilities, developing new markets and sharing of risks spread over different markets as well as the expansion into new markets. However, despite the fact that international joint ventures offer such benefits but their failure ratio is significantly larger because most major international joint ventures failed to perform.
This paper will discuss different reasons as to why international joint ventures are formed and potential benefits they provide to respective organizations by citing example from different business sectors where International joint ventures have actually been formed.
“In general, a joint venture (“JV”) is an association of two or more entities (whether corporate, government, individual or otherwise) combining property and expertise to carry out a single business enterprise and having a joint proprietary interest, a joint right to control and a sharing of profits and losses. “(Vaughan, 2009).
The above definition indicates that a joint venture can be formed between different entities regardless of their legal status by taking benefit from each other’s expertise and property to perform a single business objective. However, all the entities in the joint venture also settle for gaining joint right to control the venture as well as share profits and losses arising out of taking that business activity.
It ...Download file to see next pagesRead More
Share:
Tags
Cite this document
(“Discuss four reasons for the increase in International Joint Venture Essay”, n.d.)
Discuss four reasons for the increase in International Joint Venture Essay. Retrieved from https://studentshare.org/miscellaneous/1556970-discuss-four-reasons-for-the-increase-in-international-joint-venture-arrangements-and-support-your-analysis-with-specific-examples-from-any-business-sector

“Discuss Four Reasons for the Increase in International Joint Venture Essay”, n.d. https://studentshare.org/miscellaneous/1556970-discuss-four-reasons-for-the-increase-in-international-joint-venture-arrangements-and-support-your-analysis-with-specific-examples-from-any-business-sector.
Comments (0)
Click to create a comment or rate a document

The attempts by foreign investments to penetrate China’s market have proven futile in the past especially due to the conservative nature of the inhabitants. China is a strict country when it comes to culture and cultural interaction. For ex...
7 Pages(1750 words)Coursework
sponsored ads
Save Your Time for More Important Things
Let us write or edit the essay on your topic "Discuss four reasons for the increase in International Joint Venture arrangements and support your analysis with specific examples from any business sector" with a personal 20% discount.
GRAB THE BEST PAPER

Let us find you another Essay on topic Discuss four reasons for the increase in International Joint Venture arrangements and support your analysis with specific examples from any business sector for FREE!