Comments (0)
Add to wishlistDelete from wishlist
Cite this document
Summary
This Act stood to be the first pragmatic and effective measure initiated by the Congress to combat racial discrimination, after the Civil Rights Act of 1875. Until date, the race relations in the…
Download full paperFile format: .doc, available for editing
HIDE THIS PAPERGRAB THE BEST PAPER91.5% of users find it useful 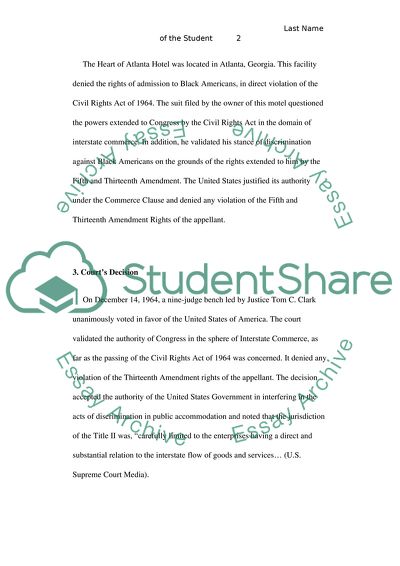 of the of the Concerned 5 August 2009 Heart of Atlanta Motel vs. United s Facts and Briefs
This groundbreaking case posed a potent opposition to the Civil Rights Act of 1964. This Act stood to be the first pragmatic and effective measure initiated by the Congress to combat racial discrimination, after the Civil Rights Act of 1875. Until date, the race relations in the US were defined by the abominable policy of segregation, a dubious and heinous system that validated the separation of the White and Black Americans in the public sphere. Civil Rights Act of 1964 prohibited any sort of discrimination in public accommodations like hotels and motels. In the case under consideration, Heart of Atlanta Motel questioned and challenged the constitutionality of the Civil Rights Act of 1964 and attempted to justify and assert its policy of discrimination against African Americans.
2. Issue
The Heart of Atlanta Hotel was located in Atlanta, Georgia. This facility denied the rights of admission to Black Americans, in direct violation of the Civil Rights Act of 1964. The suit filed by the owner of this motel questioned the powers extended to Congress by the Civil Rights Act in the domain of interstate commerce. In addition, he validated his stance of discrimination against Black Americans on the grounds of the rights extended to him by the Fifth and Thirteenth Amendment. The United States justified its authority under the Commerce Clause and denied any violation of the Fifth and Thirteenth Amendment Rights of the appellant.
3. Court’s Decision
On December 14, 1964, a nine-judge bench led by Justice Tom C. Clark unanimously voted in favor of the United States of America. The court validated the authority of Congress in the sphere of Interstate Commerce, as far as the passing of the Civil Rights Act of 1964 was concerned. It denied any violation of the Thirteenth Amendment rights of the appellant. The decision accepted the authority of the United States Government in interfering in the acts of discrimination in public accommodation and noted that the jurisdiction of the Title II was, “carefully limited to the enterprises having a direct and substantial relation to the interstate flow of goods and services… (U.S. Supreme Court Media).
4. Reason or Rule
Title II of the Civil Rights Act of 1964 prohibited the practice of racial discrimination in public accommodations whose operations had an impact on the interstate commerce. The Heart of Atlanta motel located in Atlanta, Georgia denied admission to African Americans, in direct contradiction and violation of the Title II of the Civil Rights Act of 1964. The owner of this motel stated that the interference of the Federal Government denied him of his Fifth Amendment rights, which allowed him to run his business as he pleased. In addition, the owner also claimed the denial of his Thirteenth Amendment rights in the sense that he had been burdened with involuntary servitude by the United States.
5. Reaction
I thoroughly agree with the judgment given by the honorable Court and find it in consonance with the fundamental aspirations and principles enshrined in the United States Constitution.
Works Cited
“Heart of Atlanta Motel vs. U.S. 379 U.S. 241 (1964)”. OYEZ. U.S. Supreme
Court Media. 5 August 2009 Read More
Share:
Tags
Cite this document
(“CASE ANALYSIS heart of atlanta motel v. united states Study”, n.d.)
CASE ANALYSIS heart of atlanta motel v. united states Study. Retrieved from https://studentshare.org/miscellaneous/1556834-case-analysis-heart-of-atlanta-motel-v-united-states

...): States that The Court should have concluded if the statute is dealing with actions under state regulations or if they affect commerce. Believes this action affects commerce. (Breyer, Stevens, Souter, Ginsburg): Believe that there is a strong connection between this regulated activity and interstate commerce, due to the increase of school violence. Also believe that previous important Court rulings are simply cancelled by this decision. (Darby, Atlanta Motel, Wickard) Concurring: (Justice Kennedy and O'Connor):  The limit between federal and state jurisdiction is not quite clear. (Thomas): believes that the test of "substantial effects" should be...
1 Pages(250 words)Case Study

...Stoneridge Investment Partners LLC v. Scientific Atlanta The legal issue in the case is involved with Section 10(b) of the Securities Exchange Act, which makes it illegal to use deceptive or manipulative actions in relation to the buying or selling of securities. The use of these manipulative and deceptive prices would make one liable in tort. The central bank was of the opinion that the rules of section 10 (b) excluded the giving of aid to the offender. The law however does not exclude liability for any person who acts in tandem with a deceptive buyer or seller even if they are not guilty of aiding and abetting (Williamson). The court in its analysis of the facts in the...
5 Pages(1250 words)Essay

...of the lower court in the process. The Supreme Court however, did not find any reason to dismiss the case against Wade. It was the opinion of the court that the lack of counsel at the line up proceedings could not be seen as a violation of the accused Fifth Amendment Right against self incrimination. However, the court did agree that there was a potential to violate the Sixth Amendment Rights of the accused since legal counsel was not present during certain instances leading up to the trial of the accused. The lack of counsel at the line up left the accused vulnerable to prejudice. Therefore it was important for the accused to have counsel present during critical points of his pretrial proceedings. However, in the...
4 Pages(1000 words)Case Study

...?United s v. Salerno United s v. Salerno was the landmark case that called into question the “Bail Reform Act of 1984”. It was during the trial for this case that the US Supreme Court decided that a detainee may be kept under arrest provided that the prosecution could prove that the accused was a danger to the community and other people. Therefore, there was no violation of the 5th amendment nor the Excessive Bail Clause of the 8th Amendment. This case was based upon the arrest and subsequent indictment of La Cosa Nostra boss Anthony Salerno on violations of the Racketeer Influenced and Corrupt Organizations Act (RICO...
2 Pages(500 words)Case Study

...himself bail (Fedarko, 2001). The reason that he was apprehended was that he had violated the Gun-Free School Zones Act passed by the Congress in 1990 which claimed that it was against the law for any person who deliberately possesses a firearm at a place that he is fully aware or has a valid reason to believe is a school. Any kind of violation of this Act could lead an individual to a six month prison sentence (United States v. Lopez – Case Brief Summary, 2013). Evidence Initially, Alfonso’s case was weak, and since he was financially inept to hire a competent lawyer, he was provided a state appointed defense attorney, Jack Carter. The...
3 Pages(750 words)Essay

...of the scandal has already resulted in tremendous changes in campaign finance reform and has further fuelled the already aggressive attitude of the media to a very great extent. It would be better for the American constitution if these tapes were left alone. A lot of political commentators already feel that there has been an increased level of cynicism about politics and it’s working because of the Watergate affair. To be extremely honest, the decision to belong to the school of thought that believes that no further investigation of this embarrassing political and presidential affair is needed to provide more case studies addressing the operation of the government and its political values will be better for the future of...
2 Pages(500 words)Essay

..., then the company has the right to seize the equipment. In order to prevent such undesirable usage, companies also reserve the right to monitor the usage of their equipment with or without the users’ knowledge. Companies that offer such equipment to their employees for professional usage usually educate the employees about these guidelines. As seen in the case of United States versus Angevine, the Oklahoma State University computer policy clearly mentions about the usage limits, privacy and monitoring policies, which Angevine ought to have been aware of before using the computer to download pornographic pictures, which is unethical and illegal as well as against the...
2 Pages(500 words)Essay

...United s v. Jones In the fourth amendment of US constitution, unreasonable searches and seizures against an individual are prohibited and require the judicial sanction of warrants before searches, seizures are initiated, and there must be a probable cause to effect the same (Wetterer 24). Under the amendment, searches and seizure warrants are limited depending on the information made available to the court issuing the search and seizure warrants by an officer, who swears by the same (Wetterer 78). Aspects based on the fourth amendment forms the basis for the case between United States versus Jones. In the making of court decisions involving the fourth...
4 Pages(1000 words)Essay
sponsored ads
Save Your Time for More Important Things
Let us write or edit the case study on your topic "CASE ANALYSIS heart of atlanta motel v. united states" with a personal 20% discount.
GRAB THE BEST PAPER

Let us find you another Case Study on topic CASE ANALYSIS heart of atlanta motel v. united states for FREE!