Comments (0)
Add to wishlistDelete from wishlist
Cite this document
Summary
Although several attempts have been made towards the globalization of aviation services, this paper identifies and discuses two forces namely protectionism and armed conflicts that impede this endeavor.
We can define globalization as the process of involving the entire world,…
Download full paperFile format: .doc, available for editing
HIDE THIS PAPERGRAB THE BEST PAPER93.4% of users find it useful 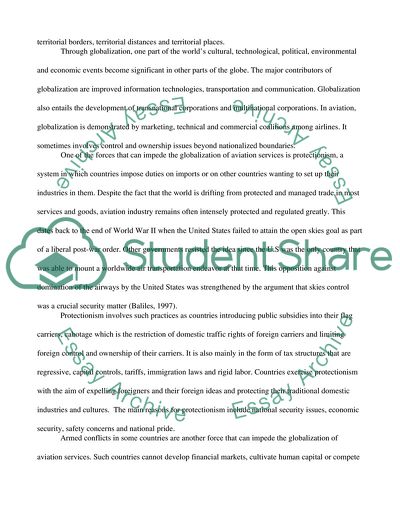 Running head: Globalization of aviation services Although several attempts have been made towards the globalization of aviation services, this paper identifies and discuses two forces namely protectionism and armed conflicts that impede this endeavor.
Introduction
We can define globalization as the process of involving the entire world, especially in a world typified by unprecedented flow of people, goods and capital. Economists define it as the closer national economies integration and the elimination of free trade barriers. In his definitions, Smith defines globalization as liberalization and argues that it is a process of eliminating limits of movement imposed by governments between nations. This is done in order to create a world economy that is borderless and open. He further defines globalization as the spread of supra-territoriality and explains that it involves reconfiguring geography in such a way that people stop mapping social space wholly in terms of territorial borders, territorial distances and territorial places.
Through globalization, one part of the world’s cultural, technological, political, environmental and economic events become significant in other parts of the globe. The major contributors of globalization are improved information technologies, transportation and communication. Globalization also entails the development of transnational corporations and multinational corporations. In aviation, globalization is demonstrated by marketing, technical and commercial coalitions among airlines. It sometimes involves control and ownership issues beyond nationalized boundaries.
One of the forces that can impede the globalization of aviation services is protectionism, a system in which countries impose duties on imports or on other countries wanting to set up their industries in them. Despite the fact that the world is drifting from protected and managed trade in most services and goods, aviation industry remains often intensely protected and regulated greatly. This dates back to the end of World War II when the United States failed to attain the open skies goal as part of a liberal post-war order. Other governments resisted the idea since the U.S was the only country that was able to mount a worldwide air transportation endeavor at that time. This opposition against domination of the airways by the United States was strengthened by the argument that skies control was a crucial security matter (Baliles, 1997).
Protectionism involves such practices as countries introducing public subsidies into their flag carriers, cabotage which is the restriction of domestic traffic rights of foreign carriers and limiting foreign control and ownership of their carriers. It is also mainly in the form of tax structures that are regressive, capital controls, tariffs, immigration laws and rigid labor. Countries exercise protectionism with the aim of expelling foreigners and their foreign ideas and protecting their traditional domestic industries and cultures. The main reasons for protectionism include national security issues, economic security, safety concerns and national pride.
Armed conflicts in some countries are another force that can impede the globalization of aviation services. Such countries cannot develop financial markets, cultivate human capital or compete economically. Research indicates that between the year 1990 and 2001, in forty-five different locations, there were fifty-seven major armed conflicts resulting from civil wars. Such wars stunt development and cause deep damage to economy by paralyzing investors, consumers and businesses and restricting capital flow. As far as budgets for defense keep on growing in relation to international tensions, and the use of economic resources for military purposes persist, fewer resources will be dedicated to economic competitiveness and human capital development.
A country experiencing armed conflicts may not be in a position to extend its airline services to other countries as it devotes much of its finances to protect itself.
In addition, tourism industries in such countries perform poorly as tourists do not visit them in fear of becoming victims of those conflicts. Foreign investors also shy off from establishing airlines or providing aviation services to those countries. Globalization of aviation services can therefore not flourish (Marber, 2004).
Conclusion
Globalizing aviation services is of great significance as it would create low-cost carriers and encourage competition among airlines worldwide. Mureithi asserts that it would create new markets for services and products. In addition, it would expand the supply chain of aerospace since manufacturers would see the market access cost savings and benefits of operating and sourcing globally. It would also make air travel safer, easier and cheaper.
References
Baliles, G.L. (1997): Fear of Flying: Aviation Protectionism and Global Growth.Retrieved August 3, 2009, from http://www.foreignaffairs.com/articles/53038/gerald-l-baliles/fear-of-flying-aviation-protectionism-and-global-growth
Marber, P. (2004): Globalization and Its Contents. August 3, 2009, from http://www.allbusiness.com/world-policy-journal/20040101/3040507-1.html
Mureithi, L.P. (2005): Globalization Issues from a Developing Nations Perspective.Retrieved August 3, 2009, from http://www.ifac.org/SMP/files/Consultative_Conference/Lepold_Mureithi_Globalization.doc.
Smith, M.K. (2002): Definitions of globalization. Retrieved August 3, 2009, from http://www.infed.org/biblio/globalization.htm Read More
Share:
Tags
Cite this document
(“Globalization of aviation services Essay Example | Topics and Well Written Essays - 500 words”, n.d.)
Globalization of aviation services Essay Example | Topics and Well Written Essays - 500 words. Retrieved from https://studentshare.org/miscellaneous/1556675-globalization-of-aviation-services

CHECK THESE SAMPLES OF Globalization of aviation services

...Globalization and Protectionism in the 21st Century Globalization is an international phenomenon with far-reaching consequences in the social, political and economic realms. Economic globalization, namely the spread of neoliberalism and capitalist-inspired consumerism as the dominant engine of economic growth, has both supporters and detractors. The world is becoming more and more interdependent and whether you think globalization is a good or bad thing, it is here to stay. Many people in developed countries argue in favor of protectionism because foreign wages are much lower and domestic producers cannot compete. The result is that jobs are lost as employment trends shift overseas. Seeking to explore the present international...
6 Pages(1500 words)Case Study

... presented at Davos 2010 showed the lackluster state of the global economy. The global recession prevails to a certain extent. The global unemployment augmented by 50 million during recession. In 2009, the fall of US auto industry had ramifications on the other sectors as well. Bankers became major targets of discussion for the role in the crisis. Sustainability became a major issue with 90% of the consumers opting for sustainable goods and services pushing the companies to bear the cost. The annual meeting recognized the advent of digital age with a session on power of social networks. With social networking new business models are emerging in every industry changing the way even physical goods are made and marketed. There is a worldwide...
7 Pages(1750 words)Coursework

Globalization has been defined in different ways by different organizations, scholars and professionals. According to Tom Palmer (n.d), globalization is the elimination or decrease of restrictions imposed by states on cross border exchange and trade, and the continued integration of the world’s systems of production and trade that as a result emerged. Thomas Friedman (2004) on the other had described globalization simply as the impact of the world’s flattening.
Friedman argues that globalization, political forces, supply chaining, and outsourcing have transformed the world in a way that has never before been witnessed – both for good and for bad. As a matter of fact, globalization has greatly impacted busine...
6 Pages(1500 words)Assignment

All these benefits get reflected in the result of employee job satisfaction. In Starbucks, the Employee Job Satisfaction rate is 82% as per the report of Hewitt Associates Starbucks Partner V...

Cultural and social globalization denotes the extensive movement of goods, technologies, ideas, images and people around the entire world which has been...

The concept of globalization encompasses theories beyond the traditional view that global corporations merely do business abroad....
7 Pages(1750 words)Coursework
sponsored ads
Save Your Time for More Important Things
Let us write or edit the essay on your topic "Globalization of aviation services" with a personal 20% discount.
GRAB THE BEST PAPER

Let us find you another Essay on topic Globalization of aviation services for FREE!