Comments (0)
Add to wishlistDelete from wishlist
Cite this document
Summary
Tyler Hayes Weinman, a former resident of Palmetto Bay and Cutler Bay, was arrested on 19 counts of animal cruelty, plus 19 counts of disposing an animal body illegally, and 4 counts of burglary according to The Miami Herald.
Weinman, 18 years old, attended Miami Palmetto…
Download full paperFile format: .doc, available for editing
HIDE THIS PAPERGRAB THE BEST PAPER92.7% of users find it useful 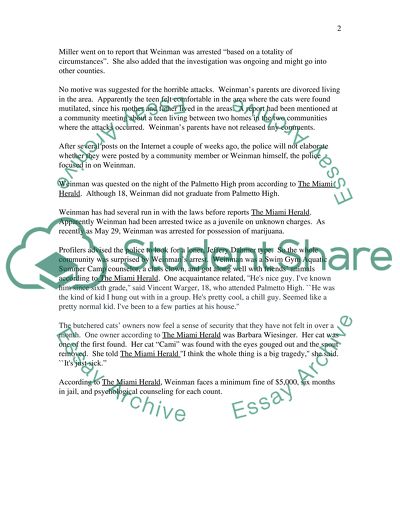 Press Release For Immediate Release June 14, 2009 Facebook helps catch alleged cat killer SOUTH MIAMI-DADE, FL---Pet owners in South Dade can rest better tonight after an alleged cat killer is apprehended by the police early Sunday morning.
Tyler Hayes Weinman, a former resident of Palmetto Bay and Cutler Bay, was arrested on 19 counts of animal cruelty, plus 19 counts of disposing an animal body illegally, and 4 counts of burglary according to The Miami Herald.
Weinman, 18 years old, attended Miami Palmetto Senior High for the 2008-2009 year, was arrested at a house in Coral Gables during a party shortly after midnight Sunday morning The Miami Herald reported. Witness state he did not give the police a statement. He was booked Sunday at 1:23 p.m. at the Turner Guilford Knight Correctional Center according to The Miami Herald.
Simultaneously a warrant was served on Weinman’s mother’s house. The police searched the mother’s house, plus a shed in the backyard according to The Miami Herald. No reports are available on what, if anything, the cops seized.
Weinman hired attorney David Macey, who spoke with WSVN-Channel 7 according to The Miami Herald. David Macey proclaimed his client’s innocence. Macey will be ready for the arraignment tentatively set on Monday. Weinman’s bail was set at $154,500, which has not yet been met.
Weinman’s downfall occurred when he signed up for a Facebook group called “Catch the Cat Killer” reports The Miami Herald. More than 1,000 members had joined this group in hopes of catching the cat killer.
The first case was reported on May 10. Over 30 cats had been mutilated, often cut open and thrown on their owners’ lawns. A police report shows one animal was ‘posed’.
A news conference was held this morning. Three police agencies worked this case. One Miami-Dade Police Major was Julie Miller. Apparently Miller tracked Weinman on tips from the local communities’ posts on Facebook, YouTube, and MySpace. What led to the arrest is the community talking and bringing us information, Miller said The Miami Herald states.
Miller went on to report that Weinman was arrested “based on a totality of circumstances”. She also added that the investigation was ongoing and might go into other counties.
No motive was suggested for the horrible attacks. Weinman’s parents are divorced living in the area. Apparently the teen felt comfortable in the area where the cats were found mutilated, since his mother and father lived in the areas. A report had been mentioned at a community meeting about a teen living between two homes in the two communities where the attacks occurred. Weinman’s parents have not released any comments.
After several posts on the Internet a couple of weeks ago, the police will not elaborate whether they were posted by a community member or Weinman himself, the police focused in on Weinman.
Weinman was quested on the night of the Palmetto High prom according to The Miami Herald. Although 18, Weinman did not graduate from Palmetto High.
Weinman has had several run in with the laws before reports The Miami Herald. Apparently Weinman had been arrested twice as a juvenile on unknown charges. As recently as May 29, Weinman was arrested for possession of marijuana.
Profilers advised the police to look for a loner, Jeffery Dahmer type. So the whole community was surprised by Weinman’s arrest. Weinman was a Swim Gym Aquatic Summer Camp counselor, a class clown, and got along well with friends’ animals according to The Miami Herald. One acquaintance related, Hes nice guy. Ive known him since sixth grade, said Vincent Warger, 18, who attended Palmetto High. ``He was the kind of kid I hung out with in a group. Hes pretty cool, a chill guy. Seemed like a pretty normal kid. Ive been to a few parties at his house.
The butchered cats’ owners now feel a sense of security that they have not felt in over a month. One owner according to The Miami Herald was Barbara Wiesinger. Her cat was one of the first found. Her cat “Cami” was found with the eyes gouged out and the snout removed. She told The Miami Herald I think the whole thing is a big tragedy, she said. ``Its just sick.”
According to The Miami Herald, Weinman faces a minimum fine of $5,000, six months in jail, and psychological counseling for each count.
Work Cited
Pagliery, Jose, Jennifer Lebovich, and Andrea Asuaje. “Suspect arrested in cat killings;
teen lived in Palmetto, Cutler Bay area.” The Miami Herald. 14 June 2009. Accessed 14 June 2009 from http://www.miamiherald.com/news/miami-dade/breaking-news/story/1096711.html Read More
Share:
Tags
Cite this document
(“Press Release Essay Example | Topics and Well Written Essays - 500 words - 1”, n.d.)
Press Release Essay Example | Topics and Well Written Essays - 500 words - 1. Retrieved from https://studentshare.org/miscellaneous/1555661-press-release

CHECK THESE SAMPLES OF Press Release

...? PRESS RELEASE Question Look at some examples. Identify three successful elements of a press release (half a page) When companies merge, or when one company buys another company, everyone involved usually wanted to sound upbeat and confident. The key is to get investors and shareholders behind the deal so that they support it. That is a key element in a successful press release. Another key element is to talk up why both companies are good for one another, how do the two companies complement each other? You need to indicate the similarities they have but also how is each the missing piece of the puzzle for the other. The final element is to tell shareholders how this will effect their bottomline. The reason people invest money... in...
3 Pages(750 words)Essay

...Press Release: Writing in Computer Science TRACEF SOLVES ALL THE PROBLEMS OF FILE TRACING Group Finds Solution to File Tracing Problems It seems the file tracing problem has finally been solved. Traces were once difficult to use, and because of how they were used for one specific purpose and then unable to be used by other sources, it limited their uses. Also, because of privacy concerns and other problems, they were just not as useful as they could be. Akshat Aranya, Charles P. Wright and Erez Zadok, however, solved that problem. They invented Tracef, an easy to use, convenient, portable way of using file traces. Tracef can use files from any system, without modifying them. The files then can be...
2 Pages(500 words)Essay

...Press Releases in Public Relations Press Releases in Public Relations The Entrepreneur defines press release as “a public relations announcement issued to the news media and other targeted publications for the purpose of letting the public know of company developments” (Entrepreneur, 2010, par. 1). In another article entitled How to: Write a Press Release, Aten (n.d.) initially qualified the term to mean “a statement prepared for distribution to the media. The purpose of a press release is to give journalists information that is useful, accurate and interesting” (Aten,...
2 Pages(500 words)Essay

...Urgent Press Release URGENT PRESS RELEASE 23/08 Contact information: Kindly use the followingcontact details to reach the chief Public Relations officer for more information on the subject. Email: pr@savethefamilycharityorg.com Phone number: 1234567890 Save the family charity organization condemns the indecent behavior expressed by the finance director. Save the family charity organization has been on the fore front in advocating for behavior change among individuals and couples. It has ensured that people get information on the value of upholding family values and ensuring the sanctity of marriage. We have engaged in behavior change activities and campaigns that have...
2 Pages(500 words)Assignment

...Fanzplanet Connects Sports Enthusiasts for a True Fan Experience An interactive social network brings together sports fans to share everything from the tailgate to exclusive interviews during the game Bringing You Closer to the Fan Experience Fanzplanet CEO, Terry Davenport, and a cutting edge team of web designers have been in collaboration for the better part of two years to bring sports fans the ultimate fan experience. Debuting worldwide in mid-August, Fanzplanet.com is a platform that operates at the intersection of video, social media, and traditional sports journalism. While sites such as ESPN.com and CNNSI.com have foregrounded cutting edge sports news and commentary, too often these sites have neglected the true fan... Connects...
2 Pages(500 words)Essay

...2nd October SSSR Press Release - August 9, With the rapid development of the society and the increasing amount of companies, the pollution problem is much more serious than 20 years ago. In modern society, the majority of pollution comes from our daily life. For example, the factories and the heavy traffic cause the air pollution. Environment protection is a very important subject that affects not only our life but also our descendant. The SSSR organization, which has a strong and powerful background, gives us some reasons to make the people to protect the Rosemont Mine. The SSSR organization uses strong ethos, logos and pathos to make the people to believe it and try to make the people fight the company...
4 Pages(1000 words)Essay

...CROWDBOOK PUBLISHERS. United s of America Best Platform For and Investors. PRESS RELEASE CrowdBook is a Legendary company from days of old that has been in a position to help both the young and aged talented authors to fulfil their dreams. It has brought to the market a platform that unites authors with investors and helps them distribute their books worldwide. Authors are given the opportunity to become publishing partners with the best community backers specializing in books. CrowdBook through its able technical support of publishers supports the authors to make their work become a reality. They present their projects, and backers support the launching of their books sharing part of the royalties...
1 Pages(250 words)Essay

...Ebola Virus Memo March 4th, Emergency Departments Center for Disease Control and Prevention Effective management of patients, suspected with ebola virus disease in the emergency departments is based on the knowledge of the disease signs, symptoms, past history of patients, isolation procedures. CDC guidance is grounded on the following three actions strategies: Identification, Isolation and Information. Ebola Identification starts from asking a suspected patient, whether they traveled to the places with widespread transmission of ebola in the last three weeks (21 days). The exposure criteria to check include such symptoms as headache, fever (38.0°C, ≥100.4°F), fatigue, muscle pain, vomiting, weakness, abdominal pain and hemorrhage...
1 Pages(250 words)Coursework
sponsored ads
Save Your Time for More Important Things
Let us write or edit the essay on your topic "Press Release" with a personal 20% discount.
GRAB THE BEST PAPER

Let us find you another Essay on topic Press Release for FREE!