Wal Mart Distribution Centers: How they utilize technology(RFID and other technologies) - Essay Example

Comments (0)
Add to wishlistDelete from wishlist
Cite this document
Summary
It is irrefutable that the rapid advancement of technology has facilitated the creation of tools and equipments which are being used to improve the efficiency of business organizations. Currently, the global business arena is on the onset of reaping the benefits of Radio…
Download full paperFile format: .doc, available for editing
HIDE THIS PAPERGRAB THE BEST PAPER93.4% of users find it useful 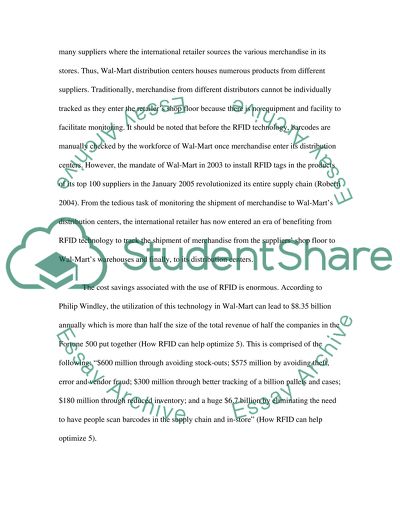 Extract of sample "Wal Mart Distribution Centers: How they utilize technology(RFID and other technologies)"

Download file to see previous pages However, it is only recently that business organizations have realized the huge benefits that this technology can deliver to their organizations. The RFID technology is revolutionizing value chain by ushering the business arena in “a new era of cost savings, efficiency, and business intelligence.” (How RFID can help optimize 8). This paper will specifically look at how Wal-Mart Stores, Inc (Walmart) has utilized the RFID technology for its benefit.
Wal-Mart is currently the world’s largest retailer and the second largest corporation next to Exxon Mobil with 2005 total sales of $316 billion in sales (Wal-Mart 1). With its size and scope, it is irrefutable that Wal-Mart’s supply chain is comprised of many suppliers where the international retailer sources the various merchandise in its stores. Thus, Wal-Mart distribution centers houses numerous products from different suppliers. Traditionally, merchandise from different distributors cannot be individually tracked as they enter the retailer’s shop floor because there is no equipment and facility to facilitate monitoring. It should be noted that before the RFID technology, barcodes are manually checked by the workforce of Wal-Mart once merchandise enter its distribution centers. However, the mandate of Wal-Mart in 2003 to install RFID tags in the products of its top 100 suppliers in the January 2005 revolutionized its entire supply chain (Roberti 2004). From the tedious task of monitoring the shipment of merchandise to Wal-Mart’s distribution centers, the international retailer has now entered an era of benefiting from RFID technology to track the shipment of merchandise from the suppliers’ shop floor to Wal-Mart’s warehouses and finally, to its distribution centers.
The cost savings associated with the use of RFID is enormous. According to Philip Windley, the utilization of this technology in Wal-Mart can lead to $8.35 billion annually which is more ...Download file to see next pagesRead More
Share:
Tags
Cite this document
(“Wal Mart Distribution Centers: How they utilize technology(RFID and Essay”, n.d.)
Wal Mart Distribution Centers: How they utilize technology(RFID and Essay. Retrieved from https://studentshare.org/miscellaneous/1538215-wal-mart-distribution-centers-how-they-utilize-technologyrfid-and-other-technologies

CHECK THESE SAMPLES OF Wal Mart Distribution Centers: How they utilize technology(RFID and other technologies)

Organisations that closely work with their suppliers stand better chances of enjoying a competitive advantage over those which just contract numerous suppliers.

In this given scenario, it is noble for the company to maintain its ‘one component, one supplier, one market strategy.’ According to Asmus and Griffin (1993), companies that effectively involve their suppliers in their product development stand better chances of gaining a competitive advantage. Supply management is of great importance where the company and the suppliers work hand in hand in its operations particularly product development. Both the company and the suppliers should closely work together in the development and design of products as a te...
9 Pages(2250 words)Case Study

... itself to just High definition LCD’s or plasma. The phrase that explains some room at the top, some room to become the best and some room for being the perfect i.e. is applied here in its true sense where every company tries to take a giant leap towards perfection. OLED (organic light emitting diode) technology is another improvement. It was introduced by Sony in the year 2008. It does not depend upon backlighting. The color of OLED is white while glowing and black when not. OLED displays use less power than the other technologies like LCDs. This is the greatest advantage nowadays in any television field. viiMentioning of no backlight means they are really slim, so slim that they are flexible. The question still remains that why they have...
6 Pages(1500 words)Coursework

Given the emergent nature of online commerce, it is a tough task for retailers to develop a website that meets all expectations from consumers. This view is supported by a survey conducted by the UK’s largest e-consultancy Cap Gemini. The survey identified several key disadvantages for online shoppers. Some of these include “’ Availability’, ‘Can’t be in to receive delivery’, ‘Premium charged for delivery’, ‘Can’t see or feel the merchandise’, etc.” (Quader & Quader, 2008) These are not trivial complaints by any means and despite the e-retailing industry setting foot into its third decade in existence, there are no satisfactory solutions found for th...
6 Pages(1500 words)Literature review
sponsored ads
Save Your Time for More Important Things
Let us write or edit the essay on your topic "Wal Mart Distribution Centers: How they utilize technology(RFID and other technologies)" with a personal 20% discount.
GRAB THE BEST PAPER

Let us find you another Essay on topic Wal Mart Distribution Centers: How they utilize technology(RFID and other technologies) for FREE!