Comments (0)
Add to wishlistDelete from wishlist
Cite this document
Summary
Shinto, from the Chinese words ‘shin’ and ‘tao’ (The Way of the Gods), is an ancient Japanese religion that has provided the moral fiber of Japanese culture since its beginnings in about 600 B.C. This indigenous religion of Japan is an unstructured mixture of a several…
Download full paperFile format: .doc, available for editing
HIDE THIS PAPERGRAB THE BEST PAPER94.5% of users find it useful 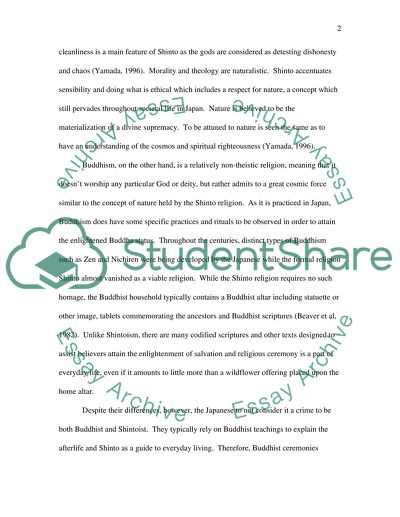 Shintoism and Buddhism in Japan Shinto, from the Chinese words ‘shin’ and ‘tao’ (The Way of the Gods), is an ancient Japanese religion that has provided the moral fiber of Japanese culture since its beginnings in about 600 B.C. This indigenous religion of Japan is an unstructured mixture of a several beliefs and practices such as the worship of nature, future foretelling, fertility sects and shamanism. In its most fundamental form, Shinto is the religious structure of Japanese nationalism. However, in the western world, Buddhism is often the recognized religion of Japanese travelers. While Shintoism and Buddhism are quite similar, there are some differences that mark them as individual belief systems rather than a single, conglomerated whole.
According to Shinto tradition, the Japanese people and their country were divinely created, their emperors descendants of the Sun Goddess, making the Shinto religion the only religion of the world that is represented by a female Deity. Unlike other religions, Shinto has no recognized founder, written scriptures, written spiritual law and a less than organized priesthood. The Shinto religion places an enormous significance on being in harmony with nature and in tranquility of the soul. Purity, the sense of public guilt and cleanliness is a main feature of Shinto as the gods are considered as detesting dishonesty and chaos (Yamada, 1996). Morality and theology are naturalistic. Shinto accentuates sensibility and doing what is ethical which includes a respect for nature, a concept which still pervades throughout societal life in Japan. Nature is believed to be the materialization of a divine supremacy. To be attuned to nature is seen the same as to have an understanding of the cosmos and spiritual righteousness (Yamada, 1996).
Buddhism, on the other hand, is a relatively non-theistic religion, meaning that it doesn’t worship any particular God or deity, but rather admits to a great cosmic force similar to the concept of nature held by the Shinto religion. As it is practiced in Japan, Buddhism does have some specific practices and rituals to be observed in order to attain the enlightened Buddha status. Throughout the centuries, distinct types of Buddhism such as Zen and Nichiren were being developed by the Japanese while the formal religion Shinto almost vanished as a viable religion. While the Shinto religion requires no such homage, the Buddhist household typically contains a Buddhist altar including statuette or other image, tablets commemorating the ancestors and Buddhist scriptures (Beaver et al, 1982). Unlike Shintoism, there are many codified scriptures and other texts designed to assist believers attain the enlightenment of salvation and religious ceremony is a part of everyday life, even if it amounts to little more than a wildflower offering placed upon the home altar.
Despite their differences, however, the Japanese to not consider it a crime to be both Buddhist and Shintoist. They typically rely on Buddhist teachings to explain the afterlife and Shinto as a guide to everyday living. Therefore, Buddhist ceremonies typically preside at funerals and sickbeds while Shinto practices dominate the country temples and daily living – the flowers upon the home altar – thanks to its association with the gods. Shinto, though once the national religion of Japan, has combined and interwoven with other beliefs such as Buddhism (Yamada, 1996). In practice, most Japanese citizens consider themselves Shinto and Buddhist but do not practice either on a consistent basis. Although these two belief systems are different, their similar basis upon the rules of nature as they have been expressed and experienced enable them to easily intertwine and become dually observed by followers.
Works Cited
Beaver, R. Pierce; Bergman, Jan; Langley, Wulf et al (Eds). Eerdman’s Handbook to the World’s Religions. Grand Rapids, MI: Wm. B. Eerdman’s Publishing Co., 1982.
Yamada, N. Alice. “Shinto: The Way of the Gods.” Trincoll Journal. Hartford, CT: Trinity College, April 4, 1996. Read More
Share:
Tags
Cite this document
(“Comparison/contrast Essay Example | Topics and Well Written Essays - 500 words”, n.d.)
Comparison/contrast Essay Example | Topics and Well Written Essays - 500 words. Retrieved from https://studentshare.org/miscellaneous/1538043-comparisoncontrast

CHECK THESE SAMPLES OF Comparison/contrast

Picasso’s painting of Tauromachy was completed in 1934 as an etching to display a bullfight. The center of this particular etching displays a bullfight after the bull as been pierced with a spear. The focus of the etching is with the bullhead, which is opened and screaming in pain with the back of the head showing banderillas, or piercing from a spear. To one side of this is a woman’s head, which comes in front of the horse. She has an outstretched arm from the right-hand corner which is holding a handkerchief to throw into the arena. The etching is further accented with the horse’s body garment, which has a hole in the front leg and which is significant with the dressed horses that were used in bullfighting in P...
8 Pages(2000 words)Essay
sponsored ads
Save Your Time for More Important Things
Let us write or edit the essay on your topic "Comparison/contrast" with a personal 20% discount.
GRAB THE BEST PAPER

Let us find you another Essay on topic Comparison/contrast for FREE!