Comments (0)
Add to wishlistDelete from wishlist
Cite this document
Summary
In daily routines, individuals, often encounter situations, when they should gain compliance or achieve consent, in order to satisfy their current needs. Trenholm and Jensen (2004) provide an extensive theoretical framework of techniques, used by individuals in order to achieve…
Download full paperFile format: .doc, available for editing
HIDE THIS PAPERGRAB THE BEST PAPER92.4% of users find it useful 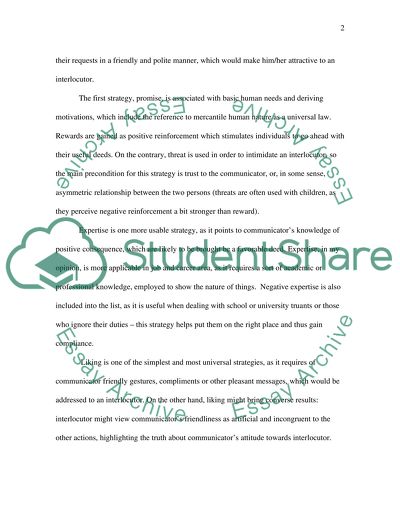 Download file to see previous pages the communicator may ignore the fact that his/her request is unrealistic or extremely dominant, so the framework is not a remedy against one’s narrow-mindness or inability to empathize, i.e. extrapolate the other person’s situation on his/her own conditions and experience the same emotions and aspirations. It is also important to understand that those techniques should be used wisely, especially when combining some of them, as the sixteen strategies are quite diverse and often incompatible with each other.
The situations, described by Trenholm and Jensen include the need for reaching consent with a senior, who will be asked for providing her basement for noisy party. Another case study employs gaining compliance with a person, who will be asked for small service – feeding the communicator’s cat for two days. Another case contains the situation, when it is necessary to ask a stranger for a service, i.e. impose to him certain behavior. As one might assume, the component of persuasion is presented in all cases, so the scholars, referring to appropriate investigations, conclude that communicators are expected to build their requests in a friendly and polite manner, which would make him/her attractive to an interlocutor.
The first strategy, promise, is associated with basic human needs and deriving motivations, which include the reference to mercantile human nature as a universal law. Rewards are gained as positive reinforcement which stimulates individuals to go ahead with their useful deeds. On the contrary, threat is used in order to intimidate an interlocutor, so the main precondition for this strategy is trust to the communicator, or, in some sense, asymmetric relationship between the two persons (threats are often used with children, as they perceive negative reinforcement a bit stronger than reward).
Expertise is one more usable strategy, as it points to communicator’s knowledge of positive consequence, which ...Download file to see next pagesRead More
Share:
Tags
Cite this document
(“Interpersonal Communication - Listening Skills - Communication Essay”, n.d.)
Interpersonal Communication - Listening Skills - Communication Essay. Retrieved from https://studentshare.org/miscellaneous/1538014-interpersonal-communication-listening-skills-communication-apprehension-compliance-gaining-method-or-social-exhange-theory-and-relational-currencies-p-22

... with reading disability or dyslexia, most of the available information concerning learning disabilities relates to reading disabilities, and the majority of the children with LD have their main deficits in reading (Torgenson, 1991). Therefore, the second part of this essay will address the relationship between students lack of metacognitive skills and reading problems. Also, in order to better understand the difficulties faced by students and teachers in the field of LD, reading disability was chosen for it is one of the more common problems; hence, an examination of this relationship provides a closer look at a concrete example of LD. The prevalence of LD identification has increased dramatically (Torgenson, 1991); however...
10 Pages(2500 words)Case Study

..., the Word drawn from the scriptures and a gathered community. The dynamics that occur between the preacher, the text and the hearer community are applicable to all kinds of Christian preaching that are commonly categorized as “Catechetical or Sacramental teaching, Kerygmatic witness or Liturgical proclamations.” Historical Overview Beyond Luke 4:16-21, the earliest recorded Christian Homiletics were delivered by the Apostle of Jesus whom he has explicitly instructed himself. Most notable were the apostles Peter who debuted on Pentecost (Acts 2:22-40), Stephen in Acts 7:1-53 and Paul in Antioch (Acts 13:17-41). These three specifically as they share the same rhetorical approach, recapitulating the history of salvation that ultimately finds...
6 Pages(1500 words)Case Study

... (Jensen and Meckling, 1976). In the health and social care industry this becomes more complex because insurance companies come into the picture as a third party. If, as the above explanation to the principals versus agents theory shows, agents behave in a manner that reduces transparency and increases risk to the principals or shareholders what would be the alternative in caring for those who are uninsured or lack adequate funds for health care? In a health care organization this is apparently the relationship between the hospital staff including paid managers and the shareholders. Decisions taken by managers to increase efficiency and profitability would negate the desires of customers but would benefit shareholders. Apparently...
8 Pages(2000 words)Case Study

Soon a retail industry was built up and the community began to grow and is considered to be a society with a civic nature (Learning Communities in Education and Training, 2009). The community of Broken Hill can be considered to be highly diverse with a census that was conducted in the area in 1996 showed that out of the then population there were 961 people who came from overseas and a large amount of those was not from an English speaking nation. The large composition of the population in the community at the time was aboriginals or Torres Strait Islanders. Broken Hill thus shows a varying ethnic community and a diverse mindset considering a large proportion of the people are from nations such as Greece, Malta and even Italy (Lea...
6 Pages(1500 words)Case Study
sponsored ads
Save Your Time for More Important Things
Let us write or edit the essay on your topic "Interpersonal Communication - Listening Skills - Communication apprehension, Compliance-gaining method or Social Exhange theory and relational currencies (p. 22" with a personal 20% discount.
GRAB THE BEST PAPER