Comments (0)
Add to wishlistDelete from wishlist
Cite this document
Summary
Homelessness in the American cities has steadily increased in the last two decades (HUD, 2002) and one-quarter of the homeless in America in 2002, comprised of teenagers and young children. Homelessness can be a traumatic experience for the students. They get twice sick as often…
Download full paperFile format: .doc, available for editing
HIDE THIS PAPERGRAB THE BEST PAPER91.9% of users find it useful 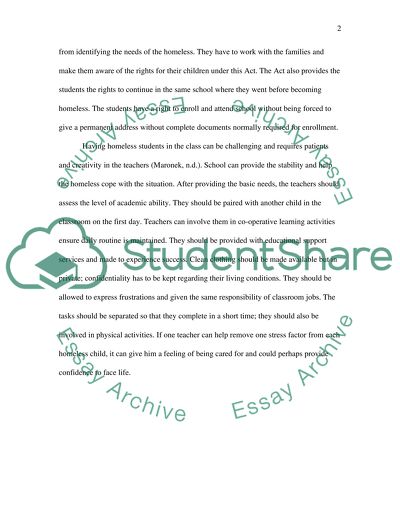 Extract of sample "Effects of homelessness on students"

Homelessness in the American cities has steadily increased in the last two decades (HUD, 2002) and one-quarter of the homeless in America in 2002, comprised of teenagers and young children. Homelessness can be a traumatic experience for the students. They get twice sick as often as other children and their ailments range from asthma, ear defects, to stomach and speech problems (Moses, n.d.). They develop learning disabilities, as they remain withdrawn. They even eat less after becoming homeless. Students suffer from mental trauma more than physical problems. They are most often separated from their families and forced to live with foster parents. Violence within the family leaves them stressed. They lack regular medical care and emotional support. Most homeless children and youth face difficulties in enrolling, attending and succeeding in school and this is precisely what the McKinney-Vento Homeless Assistance Act intends to provide.
Under the McKinney-Vento program, the State Educational Agencies (SEA) has to ensure that each homeless child or youth has equal access to the same free appropriate education as other children, including a public preschool education (USDoC, 2004). This also provides the homeless students rights to other educational services that would enable them to meet the challenges and achieve the standards like other children. The Act prohibits the school from segregating the homeless student in to a separate school. Transportation to and from school have to be ensured. All decisions have to be taken in the best interest of the child including the choice of school as desired by the parents or the guardian. This Act also provides for obtaining immunization, which is the responsibility of the local liaison appointed by the local educational agencies (LEA) apart from identifying the needs of the homeless. They have to work with the families and make them aware of the rights for their children under this Act. The Act also provides the students the rights to continue in the same school where they went before becoming homeless. The students have a right to enroll and attend school without being forced to give a permanent address without complete documents normally required for enrollment.
Having homeless students in the class can be challenging and requires patients and creativity in the teachers (Maronek, n.d.). School can provide the stability and help the homeless cope with the situation. After providing the basic needs, the teachers should assess the level of academic ability. They should be paired with another child in the classroom on the first day. Teachers can involve them in co-operative learning activities ensure daily routine is maintained. They should be provided with educational support services and made to experience success. Clean clothing should be made available but in private; confidentiality has to be kept regarding their living conditions. They should be allowed to express frustrations and given the same responsibility of classroom jobs. The tasks should be separated so that they complete in a short time; they should also be involved in physical activities. If one teacher can help remove one stress factor from each homeless child, it can give him a feeling of being cared for and could perhaps provide confidence to face life.
References:
Maronek, M. (n.d.), How Teachers Can Help Homeless Students,
21 Sep 2006
Moses D J (n.d.), Americas Homeless Children,
21 Sept 2006
HUD (2002), HUDs Homeless Management Information System, 21 Sept 2006
USDoC (2004), Education for Homeless Children and Youth program, The McKinney-Vento Homeless Assistance Act, 21 Sep 2006 Read More
Share:
Tags
Cite this document
(“Effects of homelessness on students Essay Example | Topics and Well Written Essays - 500 words”, n.d.)
Effects of homelessness on students Essay Example | Topics and Well Written Essays - 500 words. Retrieved from https://studentshare.org/miscellaneous/1537696-effects-of-homelessness-on-students

CHECK THESE SAMPLES OF Effects of homelessness on students

The supercenters like Wal-Mart are recorded to have dropped the share of small businesses in almost all areas where they are operating (Stone, Artz, & Myle, pp.12 & 13).
It is a datum of experience that the major attribute of power bearing body is its transcendence in development as compared to its contemporaries. The same goes for the world of business too. According to the studies of Jane L. Parpart, Shirin M. Rai and Kathleen Staudt in ‘Rethinking empowerment, gender, and development’, the term ‘power’ has often been used as an alternative for the developmental approaches. Stated differently, the concept of power cannot be separated from development. According to Keith Rankin in ‘Globa...
6 Pages(1500 words)Essay
sponsored ads
Save Your Time for More Important Things
Let us write or edit the essay on your topic "Effects of homelessness on students" with a personal 20% discount.
GRAB THE BEST PAPER

Let us find you another Essay on topic Effects of homelessness on students for FREE!