Comments (0)
Add to wishlistDelete from wishlist
Cite this document
Summary
Law enforcement: police, courts and corrections are the primary agencies charged with these responsibilities1.
In our state, the corrections program is…
Download full paperFile format: .doc, available for editing
HIDE THIS PAPERGRAB THE BEST PAPER96.2% of users find it useful 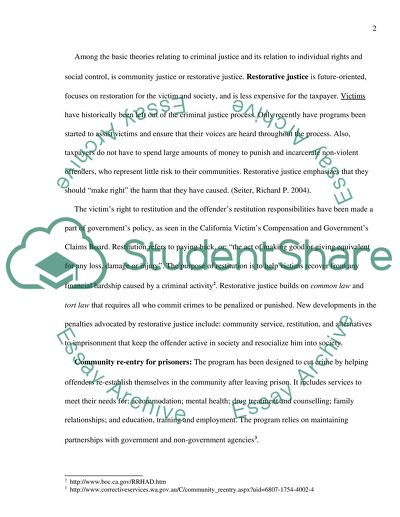 Download file to see previous pages To that end, significant research is being conducted to find out ‘what works’ to end the cycle of recidivism. In recent years, various strategies have been tried. During the next ten years we must capitalize on what we have learned, and use the hard-earned tax-payer money that we are spending in ways that will be both cost-beneficial and socially responsible. (Maurer, Susan L. 2001).
Crime control must be examined in relation to the community roots of social problems like poverty, unemployment, drugs, and inadequate housing. Penal reform should be planned in relation to societal reform in areas like education, economic opportunity and racial equality.
We need a new paradigm for sentencing and corrections. The continued reliance on imprisonment is costing society a tremendous amount of money, wasting lives, and doing little to prepare offenders to be successful in the community. To face these challenges, three steps should be taken: 1) Create a task-force to examine corrections. 2) Study the problems. 3) Prepare an action-oriented strategic development plan, to ensure that critical problems will be addressed.
Among the basic theories relating to criminal justice and its relation to individual rights and social control, is community justice or restorative justice. Restorative justice is future-oriented, focuses on restoration for the victim and society, and is less expensive for the taxpayer. Victims have historically been left out of the criminal justice process. Only recently have programs been started to assist victims and ensure that their voices are heard throughout the process. Also, taxpayers do not have to spend large amounts of money to punish and incarcerate non-violent offenders, who represent little risk to their communities. Restorative justice emphasizes that they should “make right” the harm that they ...Download file to see next pagesRead More
Share:
Tags
Cite this document
(“DB 4 Carminsl Justice Essay Example | Topics and Well Written Essays - 1000 words”, n.d.)
Retrieved from https://studentshare.org/miscellaneous/1537693-db-4-carminsl-justice

The ways in which the treatment of young offenders is differentiated from that of adult offenders are also presented using appropriate literature; particular reference is made to the role of Young Offender Institutions (YOI). It is proved that the current criminal justice for young offenders in the UK is not effective, despite the measures taken by the government for securing the rehabilitation of these individuals. On the other hand, the full alignment of the treatment of young offenders with that of the adult offenders, as this practice is in progress in the UK, will not resolve the problems related to the rehabilitation of young offenders. The alteration of the rules of the existing criminal justice system without eliminating t...
7 Pages(1750 words)Coursework
sponsored ads
Save Your Time for More Important Things
Let us write or edit the essay on your topic "DB 4 Carminsl Justice" with a personal 20% discount.
GRAB THE BEST PAPER

Let us find you another Essay on topic DB 4 Carminsl Justice for FREE!