Comments (0)
Add to wishlistDelete from wishlist
Cite this document
Summary
Reproductive rights are basically of three types: (1) the freedom to decide how many children to have, and when to have them; (2) the right to have information and means to regulate one’s fertility: and (3) the right to have and exercise control over one’s own body…
Download full paperFile format: .doc, available for editing
HIDE THIS PAPERGRAB THE BEST PAPER99% of users find it useful 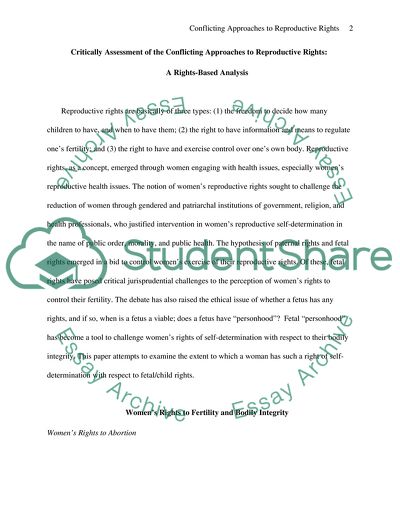 Download file to see previous pages on, and health professionals, who justified intervention in women’s reproductive self-determination in the name of public order, morality, and public health. The hypothesis of paternal rights and fetal rights emerged in a bid to control women’s exercise of their reproductive rights. Of these, fetal rights have posed critical jurisprudential challenges to the perception of women’s rights to control their fertility. The debate has also raised the ethical issue of whether a fetus has any rights, and if so, when is a fetus a viable; does a fetus have “personhood”? Fetal “personhood” has become a tool to challenge women’s rights of self-determination with respect to their bodily integrity. This paper attempts to examine the extent to which a woman has such a right of self-determination with respect to fetal/child rights.
Two United States Supreme Court decisions, Griswold v. Connecticut and Roe v. Wade, paved the way for womens reproductive rights and freedom by establishing that the right to privacy, though it did not originate in reproductive rights cases, included a womans right to make her own private and personal decisions about her reproductive choices. In particular, it was held in the Roe vs. Wade (Roe v. Wade 410 US 113 (1973), that the “right to privacy”, enshrined in the Fourteenth Amendment’s “concept of personal liberty” “… is broad enough to encompass a woman’s decision” whether or not to terminate her pregnancy.
In 1992, in Planned Parenthood v. Casey, upheld women’s right to control their fertility. However, the court replaced Roe’s strict scrutiny standard of review with the less protective “undue burden” standard. Applying this undue burden standard, the court upheld previously unconstitutional regulations on abortion such as mandatory waiting periods and permitted restrictions that necessarily delayed women from obtaining abortions, while admitting that such restrictions must provide an exception that ...Download file to see next pagesRead More
Share:
Tags
Cite this document
(“Title: Critically assess, from a right-based analysis, the conflicting Essay”, n.d.)
Title: Critically assess, from a right-based analysis, the conflicting Essay. Retrieved from https://studentshare.org/miscellaneous/1537483-title-critically-assess-from-a-right-based-analysis-the-conflicting-approaches-to-reproductive-rights-law-on-abortion-c-section-cases-re-s-1992-ag-ref

CHECK THESE SAMPLES OF Title: Critically assess, from a right-based analysis, the conflicting approaches to reproductive rights (law on abortion, c-section cases (Re S [1992]), Ag Ref

Perhaps one of the most conspicuous aspects of CNN is that it has an excellent contact network and reporters on the spo...
8 Pages(2000 words)Case Study
sponsored ads
Save Your Time for More Important Things
Let us write or edit the essay on your topic "Title: Critically assess, from a right-based analysis, the conflicting approaches to reproductive rights (law on abortion, c-section cases (Re S [1992]), Ag Ref" with a personal 20% discount.
GRAB THE BEST PAPER

Let us find you another Essay on topic Title: Critically assess, from a right-based analysis, the conflicting approaches to reproductive rights (law on abortion, c-section cases (Re S [1992]), Ag Ref for FREE!