Comments (0)
Add to wishlistDelete from wishlist
Cite this document
Summary
Also known as the “Indigenous People of Australia”, the Aborigines were the first human inhabitants of the Australian continent and its nearby islands (Figure 1). Their presence had also continued even up to the time of the European settlement, extending from mainland…
Download full paperFile format: .doc, available for editing
HIDE THIS PAPERGRAB THE BEST PAPER91.3% of users find it useful 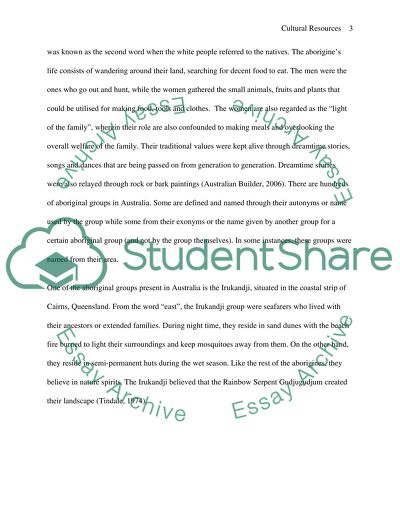 Download file to see previous pages The men were the ones who go out and hunt, while the women gathered the small animals, fruits and plants that could be utilised for making food, tools and clothes. The women are also regarded as the “light of the family”, wherein their role are also confounded to making meals and overlooking the overall welfare of the family. Their traditional values were kept alive through dreamtime stories, songs and dances that are being passed on from generation to generation. Dreamtime stories were also relayed through rock or bark paintings (Australian Builder, 2006). There are hundreds of aboriginal groups in Australia. Some are defined and named through their autonyms or name used by the group while some from their exonyms or the name given by another group for a certain aboriginal group (and not by the group themselves). In some instances, these groups were named from their area.
One of the aboriginal groups present in Australia is the Irukandji, situated in the coastal strip of Cairns, Queensland. From the word “east”, the Irukandji group were seafarers who lived with their ancestors or extended families. During night time, they reside in sand dunes with the beach fire burned to light their surroundings and keep mosquitoes away from them. On the other hand, they reside in semi-permanent huts during the wet season. Like the rest of the aborigines, they believe in nature spirits. The Irukandji believed that the Rainbow Serpent Gudjugudjum created their landscape (Tindale, 1974).
Often referred to as “the Cradle of Western Civilisation”, Greece and its unique culture is one of the pivotal influences in the field of arts, philosophy, architecture, religion, math, sciences and music (among other influences) all over the globe. Western art and early Christianity have been tremendously influenced by the Greeks through the latter’s Byzantine art and architecture ...Download file to see next pagesRead More
Share:
Tags
Cite this document
(“Identify and describes four cultural resources Essay”, n.d.)
Identify and describes four cultural resources Essay. Retrieved from https://studentshare.org/miscellaneous/1537460-identify-and-describes-four-cultural-resources

CHECK THESE SAMPLES OF Identify and describes four cultural resources

As a function of this, this book proved to be a pivotal and seminal work within the genre of cross-cultural understanding as, even though it was a novel, it helped to open the eyes of many in and around the country as to the unique set of situations that individuals experienced as a function of not only being bi-racial and living in a juxtaposition of two alternate societies but attempting to draw a sense of personal identity between the two and forging a third as a result. Furthermore, although not the express intent of the book, the issues of assimilation and the firm choice that the second generation immigrant must make between the culture of their parents and the unique aspects of the culture that they have been raised into.
sponsored ads
Save Your Time for More Important Things
Let us write or edit the essay on your topic "Identify and describes four cultural resources" with a personal 20% discount.
GRAB THE BEST PAPER

Let us find you another Essay on topic Identify and describes four cultural resources for FREE!