Comments (0)
Add to wishlistDelete from wishlist
Cite this document
Summary
Small businesses responded quickly to the opportunities. At this stage there were no preconditions set for the SMEs nor was it controlled by any institution. This freedom lasted only till the gaps…
Download full paperFile format: .doc, available for editing
HIDE THIS PAPERGRAB THE BEST PAPER97% of users find it useful 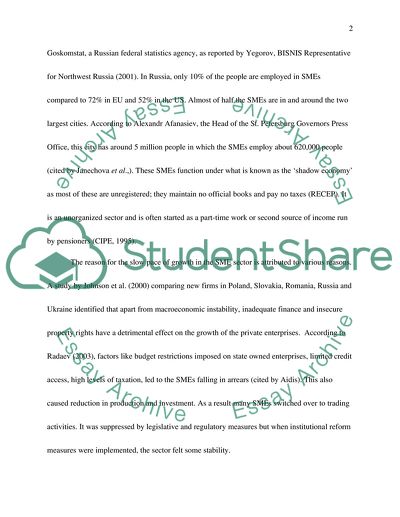 Extract of sample "Small and Medium Enterprises in Russia: problems and solutions"

Download file to see previous pages From mid 1990s, the pattern of growth of the SME sector changed across nations. While in the Central and Eastern European nations, the SMEs contributed to the employment and the GDP, in Russia the SME sector started stagnating after the initial surge (Guriev & Polischuk, 2002).
The number of small firms per capita in Russia was about 1/10th of Poland. Russia should have registered a more rapid growth but pre-reform distortions, institutional barriers remained the major hurdles. The Polish economy grew at an average rate of 6% between 1992 and 1998 and the inflation rate fell from 70 percent in 1991 to 11 percent by 1998 (Dabrowski et al., 2004). Macroeconomic stability and institutional reforms encouraged growth in Poland while Russia registered negative growth throughout the 1990s due to inconsistent liberalization programs.
Since its economic recovery in 1998, there has been some growth in the SME sector in Russia. The total number of registered SMEs in Russia in 2000 was 891,000, according to Goskomstat, a Russian federal statistics agency, as reported by Yegorov, BISNIS Representative for Northwest Russia (2001). In Russia, only 10% of the people are employed in SMEs compared to 72% in EU and 52% in the US. Almost of half the SMEs are in and around the two largest cities. According to Alexandr Afanasiev, the Head of the St. Petersburg Governors Press Office, this city has around 5 million people in which the SMEs employ about 620,000 people (cited by Janechova et al.,). These SMEs function under what is known as the ‘shadow economy’ as most of these are unregistered; they maintain no official books and pay no taxes (RECEP). It is an unorganized sector and is often started as a part-time work or second source of income run by pensioners (CIPE, 1995).
The reason for the slow pace of growth in the SME sector is attributed to various reasons. A study by Johnson et al. (2000) comparing new firms in Poland, Slovakia, Romania, Russia and Ukraine identified ...Download file to see next pagesRead More
Share:
Tags
Cite this document
(“Small and Medium Enterprises in Russia: problems and solutions Essay”, n.d.)
Small and Medium Enterprises in Russia: problems and solutions Essay. Retrieved from https://studentshare.org/miscellaneous/1536944-small-and-medium-enterprises-in-russia-problems-and-solutions

“Small and Medium Enterprises in Russia: Problems and Solutions Essay”, n.d. https://studentshare.org/miscellaneous/1536944-small-and-medium-enterprises-in-russia-problems-and-solutions.
Comments (0)
Click to create a comment or rate a document

CHECK THESE SAMPLES OF Small and Medium Enterprises in Russia: problems and solutions

The supercenters like Wal-Mart are recorded to have dropped the share of small businesses in almost all areas where they are operating (Stone, Artz, & Myle, pp.12 & 13).
It is a datum of experience that the major attribute of power bearing body is its transcendence in development as compared to its contemporaries. The same goes for the world of business too. According to the studies of Jane L. Parpart, Shirin M. Rai and Kathleen Staudt in ‘Rethinking empowerment, gender, and development’, the term ‘power’ has often been used as an alternative for the developmental approaches. Stated differently, the concept of power cannot be separated from development. According to Keith Rankin in ‘Globa...
6 Pages(1500 words)Essay
sponsored ads
Save Your Time for More Important Things
Let us write or edit the essay on your topic "Small and Medium Enterprises in Russia: problems and solutions" with a personal 20% discount.
GRAB THE BEST PAPER

Let us find you another Essay on topic Small and Medium Enterprises in Russia: problems and solutions for FREE!