Comments (0)
Add to wishlistDelete from wishlist
Cite this document
Summary
As the British spoke English, the same language was taken by different areas of the world. The state of the world as it is today means that English is…
Download full paperFile format: .doc, available for editing
HIDE THIS PAPERGRAB THE BEST PAPER93.4% of users find it useful 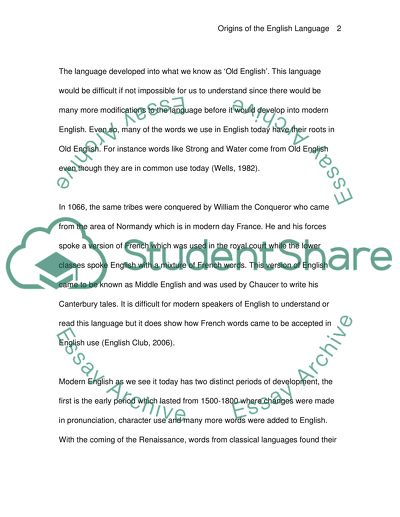 Extract of sample "History of the English Language"

Origins of the English Language When the British Empire was ruling over the better part of the world, the language of the rulers was often adopted by the ruled. As the British spoke English, the same language was taken by different areas of the world. The state of the world as it is today means that English is the lingua franca of business, computer technology, the internet and diplomatic communications (Wikipedia.org, 2006). While local and regional languages are important, English itself has become the language of choice for those who wish to compete on a global scale. However, this did not take place overnight since the language developed over hundreds of years with influences from many different languages therefore it has interesting origins.
The English language began to form with the arrival of three Germanic tribes who invaded Britain in the fourth century. The three tribes were the Angles, the Saxons and the Jutes and came from the northern areas of Germany. The Celtic language speakers of Britain were repelled by the invaders to areas of Wales and Scotland (Wells, 1982). At the same time, the language of the Angles tribe became the predominant language of the region from which the words England and English are taken (English Club, 2006).
The language developed into what we know as ‘Old English’. This language would be difficult if not impossible for us to understand since there would be many more modifications to the language before it would develop into modern English. Even so, many of the words we use in English today have their roots in Old English. For instance words like Strong and Water come from Old English even though they are in common use today (Wells, 1982).
In 1066, the same tribes were conquered by William the Conqueror who came from the area of Normandy which is in modern day France. He and his forces spoke a version of French which was used in the royal court while the lower classes spoke English with a mixture of French words. This version of English came to be known as Middle English and was used by Chaucer to write his Canterbury tales. It is difficult for modern speakers of English to understand or read this language but it does show how French words came to be accepted in English use (English Club, 2006).
Modern English as we see it today has two distinct periods of development, the first is the early period which lasted from 1500-1800 where changes were made in pronunciation, character use and many more words were added to English. With the coming of the Renaissance, words from classical languages found their way into English. The development of the printing press meant that a certain standard could be adopted for the language of the people (English Club, 2006).
Similar development continued in the later period of modern English development (1800 to present) where more words were added to the language including words from languages used in the British colonies (Wikipedia.org, 2006). Even today, the addition of words to the language continues (e.g. iPod, Google etc.) and with the way English is used on the internet and amongst the youth in online chat rooms, it would not be surprising to see a new period of the English language develop in a few more decades.
Word Count: 584
Works Cited
English Club. “What is English?” EnglishClub.com. 2006. English Club. 26 Apr. 2006. Wells, J. Accents of English. Cambridge: Cambridge University Press, 1982.
Wikipedia.org. “History of the English Language”. Wikipedia.org. 2006. Wikipedia, the free encyclopedia. Read More
Share:
Tags
Cite this document
(“History of the English Language Essay Example | Topics and Well Written Essays - 500 words”, n.d.)
Retrieved from https://studentshare.org/miscellaneous/1536750-history-of-the-english-language

CHECK THESE SAMPLES OF History of the English Language

Referential Theory becomes convoluted when you consider that not all words have direct relations to real-world entities. For instance, what would be the referent for a word like ‘the’? Linguists argue that ‘the’ isn’t necessarily a word that...
7 Pages(1750 words)Essay

The mosque is constructed in a four-iwan style. An iwan is a chamber-like structure. The four iwans face each other and form a rectangle so that the middle of the mosque is a large open-area courtyard. Undivided space encourages human interaction. Within each iwan, there are elaborate decorations to encourage prayer and worship. The decorative style is referred to as hypostyle. Through the centuries different groups have added structural supports, and decorative elements in accordance with the major architectural style of the time. This is true of other elements of the building, and it functions to give the building an entirely unique meaning. For instance, the walls are composed of varying types of brick designs, “some hist...
9 Pages(2250 words)Essay
sponsored ads
Save Your Time for More Important Things
Let us write or edit the essay on your topic "History of the English Language" with a personal 20% discount.
GRAB THE BEST PAPER

Let us find you another Essay on topic History of the English Language for FREE!