Comments (0)
Add to wishlistDelete from wishlist
Cite this document
Summary
The story has comprised of a man who has been betrayed by the people who had given him life as well as a childhood with fond memories, in the first place. The story “Oedipus the King’ has…
Download full paperFile format: .doc, available for editing
HIDE THIS PAPERGRAB THE BEST PAPER94.9% of users find it useful 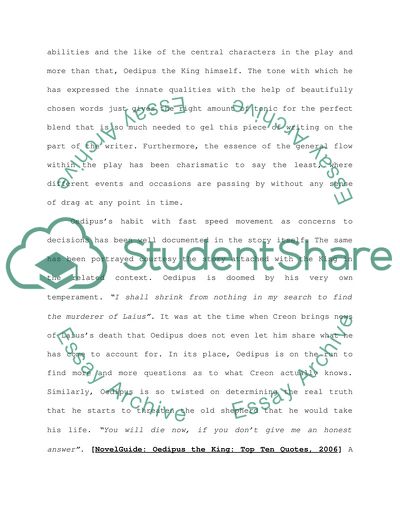 Download file to see previous pages as been shown that Oedipus was a man who was known for his rapid speed action as well as a person who possessed a great deal of intellect and fore vision. He could actually look into the future and suggest for others as to what is going to happen next and he was quite good at that. Thus these qualities say a thing or two of him becoming an excellent ruler who foresaw his subjects’ needs and desires.
As has been the case during the while of this story, we see that the relation between the different themes, the style and the tone employed have huge roles to play in actually detailing the readers about the story itself. The extent of easiness and calm found in the thematic discussions leads us into thinking that the writer really did the trick while showcasing the virtues, abilities and the like of the central characters in the play and more than that, Oedipus the King himself. The tone with which he has expressed the innate qualities with the help of beautifully chosen words just gives the right amount of tonic for the perfect blend that is so much needed to gel this piece of writing on the part of the writer. Furthermore, the essence of the general flow within the play has been charismatic to say the least, where different events and occasions are passing by without any sense of drag at any point in time.
Oedipus’s habit with fast speed movement as concerns to decisions has been well documented in the story itself. The same has been portrayed courtesy the story attached with the King in the related context. Oedipus is doomed by his very own temperament. “I shall shrink from nothing in my search to find the murderer of Laius”. It was at the time when Creon brings news of Laius’s death that Oedipus does not even let him share what he has come to account for. In its place, Oedipus is on the run to find more and more questions as to what Creon actually knows. Similarly, Oedipus is so twisted on determining the real truth that he starts to threaten the old ...Download file to see next pagesRead More
Share:
Tags
Cite this document
(“Explain how the author's writing techniques help to explain the Essay”, n.d.)
Retrieved from https://studentshare.org/miscellaneous/1536711-explain-how-the-authors-writing-techniques-help-to-explain-the-meaning-in-oedipus-the-king

Given the emergent nature of online commerce, it is a tough task for retailers to develop a website that meets all expectations from consumers. This view is supported by a survey conducted by the UK’s largest e-consultancy Cap Gemini. The survey identified several key disadvantages for online shoppers. Some of these include “’ Availability’, ‘Can’t be in to receive delivery’, ‘Premium charged for delivery’, ‘Can’t see or feel the merchandise’, etc.” (Quader & Quader, 2008) These are not trivial complaints by any means and despite the e-retailing industry setting foot into its third decade in existence, there are no satisfactory solutions found for th...
6 Pages(1500 words)Literature review
sponsored ads
Save Your Time for More Important Things
Let us write or edit the essay on your topic "Explain how the author's writing techniques help to explain the meaning in Oedipus the King" with a personal 20% discount.
GRAB THE BEST PAPER

Let us find you another Essay on topic Explain how the author's writing techniques help to explain the meaning in Oedipus the King for FREE!