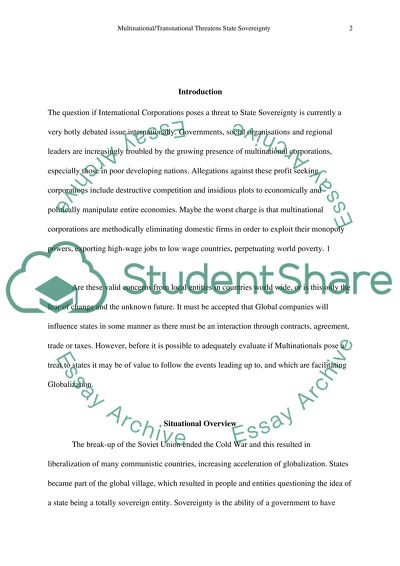 Download file to see previous pages 1
Are these valid concerns from local entities in countries world wide, or is this only the fear of change and the unknown future. It must be accepted that Global companies will influence states in some manner as there must be an interaction through contracts, agreement, trade or taxes. However, before it is possible to adequately evaluate if Multinationals pose a treat to states it may be of value to follow the events leading up to, and which are facilitating Globalization.
The break-up of the Soviet Union ended the Cold War and this resulted in liberalization of many communistic countries, increasing acceleration of globalization. States became part of the global village, which resulted in people and entities questioning the idea of a state being a totally sovereign entity. Sovereignty is the ability of a government to have absolute authority over its own territory. Economic interdependence between states has meant that increasingly what happens somewhere in the world ultimately affects all the countries in the world. Thus, the role of politics has been overtaken by the role of economics.2
At the beginning of the 1990s, James Rosenau, one of the leading theorists of this trend, developed the idea that globalisation and ‘Tran nationalisation’ has led us into a period of global ‘turbulence’. While the state is not about to disappear, it no longer has a free hand and has lost control of events. Rosenau claimed that the inter-states system, once the central pivot of international affairs now coexists with a ‘multi-centred’ system; the determination of foreign policy has largely passed to non-state entities.3
As the world market today is realized ever more completely, it tends to deconstruct the boundaries of the nation-state. Robert Reich, former U.S secretary of labour celebrates the overcoming of national ...Download file to see next pagesRead More
Share:
Tags
Cite this document
(“What is the evidence that multinational/transnational corporations Essay - 1”, n.d.)
What is the evidence that multinational/transnational corporations Essay - 1. Retrieved from https://studentshare.org/miscellaneous/1536701-what-is-the-evidence-that-multinationaltransnational-corporations-pose-a-threat-to-state-sovereignty

“What Is the Evidence That multinational/Transnational Corporations Essay - 1”, n.d. https://studentshare.org/miscellaneous/1536701-what-is-the-evidence-that-multinationaltransnational-corporations-pose-a-threat-to-state-sovereignty.
Comments (0)
Click to create a comment or rate a document

... level of income, entailed in a static economy. Evidence is emerging that fairer income distribution is entailed in achieving higher rates of economic growth (N. Birdsall). It has been argued by some critiques of globalisation that international integration of economies leads to a reduction in national sovereignty. Naomi Klein has argued that globalisation transfers power from elected politicians to self-appointed managers of multinational companies (Klein). National political leaders complain (implicitly) of their inability to pursue, with complete impunity, vendetta against dissidents and minorities for fear of frightening away international capital. The question of democratic deficit is an important question, but it cannot be discussed...
12 Pages(3000 words)Essay

... Peoples: The impact of transnational corporations on the world's poor. London, Zed Books. Mann, M. 2000, "Has globalization ended the rise and rise of the nation-state" in The global transformations reader: an introduction to the globalization debate, edited by Held, D. and A. McGrew. Pp. 136-147. Cambridge, Polity Press. Narula, R., and Dunning, J.H. 1999, "Developing countries versus multinational enterprises in a globalising world: the dangers of falling behind, Forum for Development Studies, vol. 2, pp. 261-87. Nicholas, S. et al. 1995, "Japanese investment in Australia: the investment decision and control structures in manufacturing, tourism and financial Services," Canberra: Australia-Japan Research Centre, Australian...
12 Pages(3000 words)Essay

... declining revenue growth rates) for jeans manufacturers in general and the Company in particular and may result in pricing pressures for products that the Company sells. Similarly, the discussion leading to the multination or transnational corporations posing as a threat to the state’s sovereignty stems from the fact that no matter whichever country we might talk about, one thing is pretty common for all of them and this is that the state would never allow a multinational company to exist within its boundaries that has no respect for the feelings and sentiments of its general public. Add to that, the state would also forbid the multinationals from their operations if there are any direct competitors for their local players in the market...
4 Pages(1000 words)Essay

Proves are very crucial to many investigations, especially when attempting to reach a logical conclusion of whether or not the investigated shooting was done in self-defence, suicide, or in fact a homicide. Again, all the most up to date studies are also included in this researched literature being presented. The conclusion is in showing just how valuable of an asset these specific tests really are towards the outcome of numerous investigations from the past and in the present.
The materials that are found to make up gun powder residue and seemingly found to predominantly consist of a mixture including organic and non-organic substances are basically elemental metals, among other items. However, it has been determined by a nu...
11 Pages(2750 words)Coursework

Prior to 1945, there was no unified international prohibition on a unilateral resort to force and the UN Charter sought to radicalize international politics through a general prohibition on the use of unilateral force by member states. The prohibition was officially enshrined in Article 2(4) of the Charter, which provides that:
“All member states shall refrain in their international relations from the threat or use of force against the territorial integrity or political independence of any state, or in any other manner inconsistent with the Purposes of the United Nations”(UN Charter Article 2(4) 1945).
Despite the purported ban on the unilateral use of force, the parameters of Article 2(4)’s applicabili...

... suggests that with the existence of early movers in e-commerce it is not true that late movers cannot achieve competitive advantage. He implies that with greater investment and effort late movers can push early movers to rethink of their business strategies and even force them to exit the market. Furthermore, being a late mover in e-commerce does not surely mean that such companies cannot opt to provide “a particular service, a combination of services, or other unique value propositions” (p.8). The role of the senior management in allowing higher investment and their willingness to try new ideas on the basis of the assessment of the existing market is very much needed for late movers to succeed. However, it is clear from corporate evidence...
12 Pages(3000 words)Research Proposal

In essence, employee commitment means loyalty to the employer and is one of the aspects that signify successful employee relations. The employer must be ready to reciprocate the commitment of employees for satisfaction in the workplace to be accomplished. This paper presents a critical assessment of some issues which may arise for the management researcher investigating the extent of employee commitment in a large multinational organization. It focuses on some of the factors that affect employee commitment in multinational organizations such as employee satisfaction, retention, career ladders, job security, employment relations, cultural diversity and empowerment of the human resources.
Employee satisfaction is a significant...
8 Pages(2000 words)Essay
sponsored ads
Save Your Time for More Important Things
Let us write or edit the essay on your topic "What is the evidence that multinational/transnational corporations pose a threat to state sovereignty" with a personal 20% discount.
GRAB THE BEST PAPER

Let us find you another Essay on topic What is the evidence that multinational/transnational corporations pose a threat to state sovereignty for FREE!