Comments (0)
Add to wishlistDelete from wishlist
Cite this document
Summary
This paper will discuss whether or not it is reasonable to argue that competition is socially harmful rather than market power and explain the significance of the following for our understanding of the effects of market power: economies of scale and product durability…
Download full paperFile format: .doc, available for editing
HIDE THIS PAPERGRAB THE BEST PAPER97.2% of users find it useful 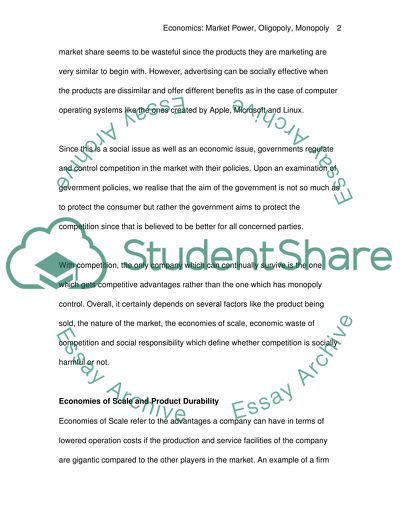 Download file to see previous pages Depending on the premise and circumstances of the discussion it can be reasonable to argue that competition is socially harmful as compared to market power. However, the argument against competition is very weak since empirical evidence and data shows the competition has more economic benefits and support for the development of the market than a single firm holding and dominating market power over an industry.
This is because there are several benefits which can be gained from having some competition in a market. For instance, competition may force prices to go down for the consumer if a lower cost producer competes in the market. Additionally, a better product might be entered into the market with actually superior or perceived superior quality. The combination of these two factors can create products which are innovative, desirable and can cause the emergence of brands within an industry.
At the same time, competition may be unnecessary or wasteful if the product differentiation is very low. For instance, the battle between Coke and Pepsi for market share seems to be wasteful since the products they are marketing are very similar to begin with. However, advertising can be socially effective when the products are dissimilar and offer different benefits as in the case of computer operating systems like the ones created by Apple, Microsoft and Linux.
...Download file to see next pagesRead More
Share:
Tags
Cite this document
(“Economics-Market Power, Oligopoly, Monopoly Essay”, n.d.)
Economics-Market Power, Oligopoly, Monopoly Essay. Retrieved from https://studentshare.org/miscellaneous/1536682-economics-market-power-oligopoly-monopoly

However, some of the recent trends have prompted the prediction that consumption of beer will go down in some of the European countries like France, Spain, and Germany. The threat of such a...
7 Pages(1750 words)Assignment

Examp...
6 Pages(1500 words)Assignment
sponsored ads
Save Your Time for More Important Things
Let us write or edit the essay on your topic "Economics-Market Power, Oligopoly, Monopoly" with a personal 20% discount.
GRAB THE BEST PAPER

Let us find you another Essay on topic Economics-Market Power, Oligopoly, Monopoly for FREE!