Comments (0)
Add to wishlistDelete from wishlist
Cite this document
Summary
Reports from the Australian Bureau of Statistics paint an alarming picture – while the 15-19 group is still one of the lowest in terms of number of suicides per 100,000 people, the figures are increasing,…
Download full paperFile format: .doc, available for editing
HIDE THIS PAPERGRAB THE BEST PAPER93.1% of users find it useful 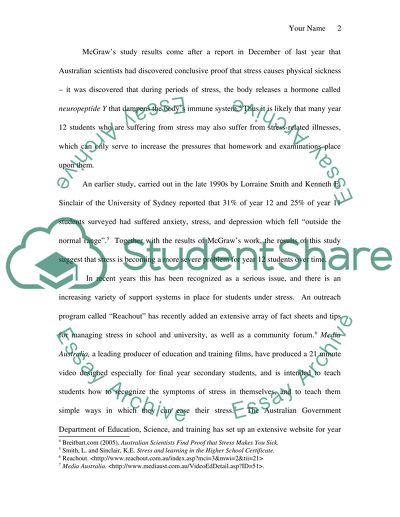 Stress is a Serious Issue for Year 12 Australian Youth suicide is becoming an increasingly serious issue in Australia. Reports from the Australian Bureau of Statistics paint an alarming picture – while the 15-19 group is still one of the lowest in terms of number of suicides per 100,000 people, the figures are increasing, and suicides make up an increasing proportion of total deaths in the 15-19 age group.1
For Australian students, year 12 is the most important of their secondary school years. Results of year 12 examinations are used as the criteria by which they are judged for entry into the work force and into tertiary education.
Because of this, stress is a serious issue for Australian students in year 12. A recent study carried out by an Australian psychologist Karen McGraw of the University of Swinburne indicates that almost one in five year 12 students have thought about hurting or killing themselves because of the stress caused by exam and homework pressures. In this study, 941 Victorian final-year students were surveyed. McGraw has described the effects of stress on the mental health of the students studied as “alarming”, and further states that while 19% had thought of suicide or self-harm, around one third of students were “severely depressed” and 41% were suffering from anxiety.2
Another Australian psychologist, adolescence specialist Michael Carr-Gregg, has stated that an inquiry in 2004 into youth suicides found that one in 11 completed suicides is a direct result of stress related to the pressures of year 12.3
McGraw’s study results come after a report in December of last year that Australian scientists had discovered conclusive proof that stress causes physical sickness – it was discovered that during periods of stress, the body releases a hormone called neuropeptide Y that dampens the body’s immune system.4 Thus it is likely that many year 12 students who are suffering from stress may also suffer from stress-related illnesses, which can only serve to increase the pressures that homework and examinations place upon them.
An earlier study, carried out in the late 1990s by Lorraine Smith and Kenneth E. Sinclair of the University of Sydney reported that 31% of year 12 and 25% of year 11 students surveyed had suffered anxiety, stress, and depression which fell “outside the normal range”.5 Together with the results of McGraw’s work, the results of this study suggest that stress is becoming a more severe problem for year 12 students over time.
In recent years this has been recognized as a serious issue, and there is an increasing variety of support systems in place for students under stress. An outreach program called “Reachout” has recently added an extensive array of fact sheets and tips for managing stress in school and university, as well as a community forum.6 Media Australia, a leading producer of education and training films, have produced a 21 minute video designed especially for final year secondary students, and is intended to teach students how to recognize the symptoms of stress in themselves, and to teach them simple ways in which they can ease their stress.7 The Australian Government Department of Education, Science, and training has set up an extensive website for year 12 students, which is designed to give them advice on another aspect which can cause a great deal of stress – planning for the future, in terms of entering tertiary education or the work force.8
References
Australian Bureau of Statistics. Suicides 1994-2004.
Breitbart.com (2005). Australian Scientists Find Proof that Stress Makes You Sick. Retrieved April 23, 2006 from .
Gough, D. and Edwards, H. (2006). Pressure Takes Big Toll on Students. Retrieved April 23, 2006 from .
Media Australia. .
Reachout. .
Smith, L. and Sinclair, K.E. Stress and learning in the Higher School Certificate. Retrieved April 23, 2006 from .
Year 12, What Next? . Read More
Share:
Tags
Cite this document
(“Year 12 stress levels for australian students Essay”, n.d.)
Year 12 stress levels for australian students Essay. Retrieved from https://studentshare.org/miscellaneous/1536665-year-12-stress-levels-for-australian-students

CHECK THESE SAMPLES OF Year 12 stress levels for australian students

Estimating corruption is always difficult because people never reveal the facts of corruption that they are involved in. Politicizing public service often becomes a major problem and this reprehensible practice was introduced during the regime of the Labour party government and was continued by the Coalition government. Due to this, the public servants have slowly commenced to divest themselves of accountability towards parliament or to the code of conduct (McLennan, 2004).<...

Hien Ng's personal history was also significant. He was a chronic smoker and had smoked 20 cigarettes per day for many years. On admission, a general examination of the patient revealed that he was anxious and agitated, but orientated to time and place. His skin was pale and cool to touch. Heart rate was 116 beats per minute and irregular, blood pressure was 140/95mmHg, the temperature was 37.8 C (cool peripheries), respiratory rate was 28 per minute, abdominal pain score was 6/10 and approximate weight was 68kg and height 163cm.

From the above history, it is evident that Mr. Ng was admitted to the hospital with acute gastroenteritis with dehydration and exacerbation of chronic gastric ulcers. He was subjected to both a...

According to the expert analysis the opposition center-left Australian Labor Party, at present led by Kevin Rudd and deputy manager Julia Gillard, will be the major contestant to the current center-right alliance government in authority since the 1996 election, at present led by the Prime Minister in addition to the great leader of the Liberal Party of Australia, and his alliance partner the Deputy Prime Minister furthermore great leader of the National Party of Australia, Mark Vaile.

No doubt, the Australian group of people newspapers are unlike their every day complements in that they do not selectively issue letters to the editor, but characteristically turn out everything they take delivery of. The small numbers of...

Calculations are carried out on mortality rates and disability variables. Health care gaps between the rural and urban areas are taken into consideration. Cost-effectiveness inquiry has been conducted as well to establish the validity and reliability of the findings.
I agree that an aging population is one of the major problems confronting Australia today. Besides the scarcity of working-age individuals, the country is confronting the financial burdens caused by the growing demand for elderly care. I disagree with the point that only serious health problems deserve wide-ranging, concentrated attention. Nevertheless, this paper is useful because it provides useful explanations of the opportunities to acquire greater health suc...
8 Pages(2000 words)Literature review
sponsored ads
Save Your Time for More Important Things
Let us write or edit the essay on your topic "Year 12 stress levels for australian students" with a personal 20% discount.
GRAB THE BEST PAPER

Let us find you another Essay on topic Year 12 stress levels for australian students for FREE!