Comments (0)
Add to wishlistDelete from wishlist
Cite this document
Summary
Aboriginal people are the natives of Australia, who believe in cultures and spirituality. They are moral people, who have an exceptionally strict code of sexual behavior and stern punishment for those who broke the code (1990:236) (Atkinson J., pg 62)…
Download full paperFile format: .doc, available for editing
HIDE THIS PAPERGRAB THE BEST PAPER95.1% of users find it useful 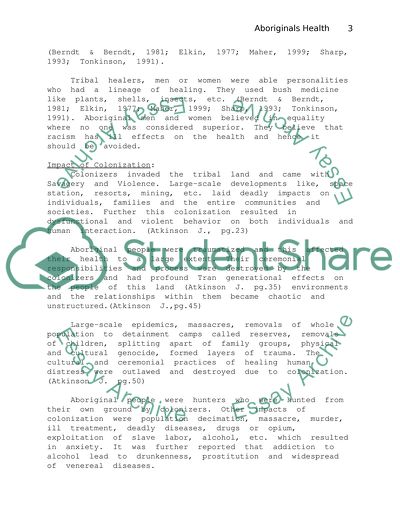 Download file to see previous pages (Atkinson J.,pg.27)
Due to this colonization the Aboriginal people suffered a major setback in terms of ill-health, loss of land and identity, exclusion from society, etc. Now the Australian government has imposed laws and policies for the betterment of the Indigenous Australians and Torres Strait Islander People, which shows some signs of hope.
Living in their own territorial boundaries, in small extended families, linked to larger groups and woven together by complex systems and rules for social interaction, Aboriginal people lived in total harmony. (Atkinson J., pg.25). They believed in We Al-li: fire and water, anger and grief, a program of healing. They also believe that dysfunctional cause's ill health, and so breach of land, kinship and trade obligations, breach of taboo, disrespecting dead and law was avoided. (Berndt & Berndt, 1981; Elkin, 1977; Maher, 1999; Sharp, 1993; Tonkinson, 1991).
They had well balanced nutritious diet of animals, insects, plants, vegetables, fruits, etc. etc as they were available in plenty. (Berndt & Berndt, 1981; Elkin, 1977; Maher, 1999; Sharp, 1993; Tonkinson, 1991) and practiced a very healthy lifestyle which they got from daily activities like hunting/gathering.
They had their own ways of taking revenge or giving justice like:
1) Physical retribution
2) Tribal
3) Sorcery or Supernatural powers
(Berndt & Berndt, 1981; Elkin, 1977; Maher, 1999; Sharp, 1993; Tonkinson, 1991).
Tribal healers, men or women were able personalities who had a lineage of healing. They used bush medicine like plants, shells, insects, etc. (Berndt & Berndt, 1981; Elkin, 1977; Maher, 1999; Sharp, 1993; Tonkinson, 1991). Aboriginal men and women believed in equality where no one was considered superior. They believe that racism has ill effects on the health and hence it should be avoided.
Impact of Colonization:
Colonizers invaded the tribal land and came with Savagery and Violence. Large-scale developments like, space station, resorts, mining, etc. laid deadly impacts on individuals, families and the entire communities and societies. Further this colonization resulted in dysfunctional and violent behavior on both individuals and human interaction. (Atkinson J., pg.23)

Aboriginal people were traumatized and this affected their health to a large extent. Their ceremonial responsibilities and process were destroyed by the colonizers and had profound Tran generational effects on the people of this land (Atkinson J. pg.35) environments and the relationships within them became chaotic and unstructured.(Atkinson J.,pg.45)

CHECK THESE SAMPLES OF Colonization Impact on Aboriginal's Health

...Health Issue of Aboriginal Affiliation: The aboriginal are aware of their health issues based on the number of illnesses they have as well as the numerous visits they make to the health centers. They however blame the government and the issue of racism on their predicament and not the fact that majority are uneducated hence are not aware of the best nutritional health and taking health precautions like the rest of the civilized communities. They have continued to isolate themselves from the rest of the population and hence continue to be left behind when changes in health sector are taking place and this explains their predicament (Dudgeon, Milroy & Walker, 2013). The aboriginal people have started accepting that their health is at stake...
2 Pages(500 words)Essay

President Andrew Jackson led an example of an administration that set the stage for the way in which James Polk would lead. In 1817, as a still yet military leader, Jackson led the United States into the first of three conflicts with the Seminole Indians from which the acquisition of Florida from Spain would be negotiated and finalized. The situation with Spain was tenuous and should have been dealt with in a diplomatic and cautious manner, but in 1817 President Monroe wrote a letter to General Jackson stating that “Great interests...
8 Pages(2000 words)Article
sponsored ads
Save Your Time for More Important Things
Let us write or edit the essay on your topic "Colonization Impact on Aboriginal's Health" with a personal 20% discount.
GRAB THE BEST PAPER

Let us find you another Essay on topic Colonization Impact on Aboriginal's Health for FREE!