Comments (0)
Add to wishlistDelete from wishlist
Cite this document
Summary
The paper seek to analyze the application of various concepts of law under the Sales Goods Act of 1979, Unfair Clear Terms Act (UCTA) of 1977 and other related laws. such as implied terms and exclusion or limitation clauses in contracts. To appreciate the application the…
Download full paperFile format: .doc, available for editing
HIDE THIS PAPERGRAB THE BEST PAPER98.9% of users find it useful 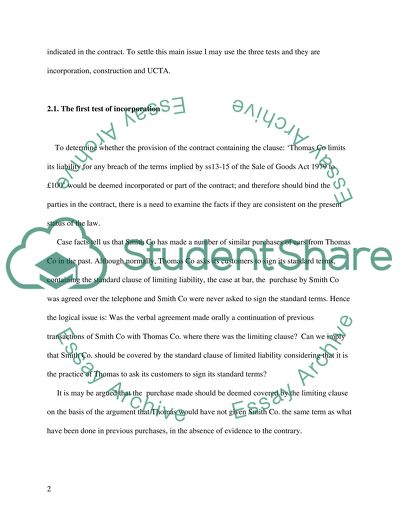 Download file to see previous pages It quickly became clear that the car is seriously defective and that it will cost at least £1000 to deal with the problems. Thomas Co always offer to those who buy cars from them, the opportunity to purchase a service contract covering parts and labour on the car purchased for 2 years. Smith Co have always declined such offers from Thomas Co.
The conclusion of this paper is meant to give advice to Smith Co., hence, the main issue here is whether or not Thomas Company could be held liable for the damage in excess of the £100 on defective car purchased by Smith Co. considering the presence of the limitation of the liability as indicated in the contract. To settle this main issue I may use the three tests and they are incorporation, construction and UCTA.
To determine whether the provision of the contract containing the clause: ‘Thomas Co limits its liability for any breach of the terms implied by ss13-15 of the Sale of Goods Act 1979 to £100’ would be deemed incorporated or part of the contract; and therefore should bind the parties in the contract, there is a need to examine the facts if they are consistent on the present status of the law.
Case facts tell us that Smith Co has made a number of similar purchases of cars from Thomas Co in the past. Although normally, Thomas Co asks its customers to sign its standard terms, containing the standard clause of limiting liability, the case at bar, the purchase by Smith Co was agreed over the telephone and Smith Co were never asked to sign the standard terms. Hence the logical issue is: Was the verbal agreement made orally a continuation of previous transactions of Smith Co with Thomas Co. where there was the limiting clause? Can we imply that Smith Co. should be covered by the standard clause of limited liability considering that it is the practice of Thomas to ask its customers to sign its standard terms?
It is may be argued that the purchase made ...Download file to see next pagesRead More
Share:
Tags
Cite this document
(“EXEMPTION CLAUSES ( contract ) Essay Example | Topics and Well Written Essays - 1500 words”, n.d.)
EXEMPTION CLAUSES ( contract ) Essay Example | Topics and Well Written Essays - 1500 words. Retrieved from https://studentshare.org/miscellaneous/1536588-exemption-clauses-contract

The contract consists of an actionable promise and promises. Every such promise involves two parties, a promiser and promise and an expression of a common intention and of expectations as to the act or forbearance promised

It is what a party objectively demonstrates, not what a party may subjectively be thinking. Mutual assent is manifested in an offer, acceptance, and consideration. An offer is an indication by one party, offeror of a willingness to enter into a contract with another party, offered on some specific terms. A valid offer creates a power exclusively in the hands of the offeree such that all that is needed to form a contract is accepted. If one or more of the terms are missing from the offer, a court...
11 Pages(2750 words)Case Study

... not allocate the loss proportionally was the crux of the issue. (Blackler 2008). Hence, in Camford University project work, I wish to advise that it is wise to follow the decision made in the City Inn case and to grant time extension to the contractor. 2. Antiquities It is better to add clauses in JCT contract as regards to contractual provision concerning with the finding antiquity objects during the course of a contract work for varied reasons. One has to be careful in regard to antiquity object as disturbance or removal of such antiquity from their original site may deteriorate their value. For instance, during the construction of a very expensive and large project in London, Shakespeare’s Globe theatre was found and this had delayed...
13 Pages(3250 words)Essay
sponsored ads
Save Your Time for More Important Things
Let us write or edit the essay on your topic "EXEMPTION CLAUSES ( contract )" with a personal 20% discount.
GRAB THE BEST PAPER

Let us find you another Essay on topic EXEMPTION CLAUSES ( contract ) for FREE!