Comments (0)
Add to wishlistDelete from wishlist
Cite this document
Summary
This was the era marked with instability that severely weakened the French state. The series of “Republics” which followed the fall of the last…
Download full paperFile format: .doc, available for editing
HIDE THIS PAPERGRAB THE BEST PAPER98.1% of users find it useful 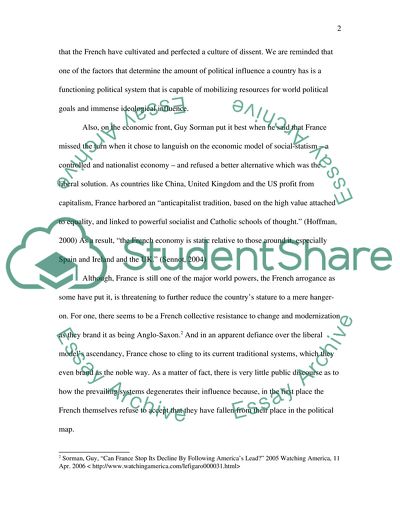 Although France has made great technological and economic progress in the twentieth century, her political influence has been much reduced. Trace this decline from 1900 to the present."
The 1900s may very well be called as the period which laid the groundwork for France’s decline in international political stage. This was the era marked with instability that severely weakened the French state. The series of “Republics” which followed the fall of the last French empire were mostly experimental systems. The political instability generated by several transitions was highlighted in the 3rd Republic, which lasted for 70 years until the invasion of France by Germany in 1940. Throughout its history, the 3rd Republic stumbled from crisis to crisis, ranging from collapsing governments to the appointment of a mentally ill president. This is also the time when the decolonization began and France lost most of its colonial possessions. It was Charles de Gaulle, writing in his memoirs, who said that France was overburdened with history, wars and revolutions, moving endlessly from grandeur to decline.
At the end of World War II, France adopted a socialist system anchored on a “thick social safety net… by an extraordinary coalition of Gaullists, Socialists, Communists and Christian Democrats.” (Hoffman, 2004) This same policy which is still in effect up to this day is to lead France to economic and political stagnation which contributed greatly to the country’s declining relevance.
For instance, on the premise of governance, the present French bureaucracy is colonized by its employees and unions, where it is impossible for the government to confront its people head-on and implement drastic changes.1 Some observers comment that the French have cultivated and perfected a culture of dissent. We are reminded that one of the factors that determine the amount of political influence a country has is a functioning political system that is capable of mobilizing resources for world political goals and immense ideological influence.
Also, on the economic front, Guy Sorman put it best when he said that France missed the turn when it chose to languish on the economic model of social-statism – a controlled and nationalist economy – and refused a better alternative which was the liberal solution. As countries like China, United Kingdom and the US profit from capitalism, France harbored an “anticapitalist tradition, based on the high value attached to equality, and linked to powerful socialist and Catholic schools of thought.” (Hoffman, 2000) As a result, “the French economy is static relative to those around it, especially Spain and Ireland and the UK.” (Sennot, 2004)
Although, France is still one of the major world powers, the French arrogance as some have put it, is threatening to further reduce the country’s stature to a mere hanger-on. For one, there seems to be a French collective resistance to change and modernization as they brand it as being Anglo-Saxon.2 And in an apparent defiance over the liberal model’s ascendancy, France chose to cling to its current traditional systems, which they even brand as the noble way. As a matter of fact, there is very little public discourse as to how the prevailing systems degenerates their influence because, in the first place the French themselves refuse to accept that they have fallen from their place in the political map.
Works Cited
Hoffman, Stanley, “From Decline to Renewal,” TIME Europe June 2000
Sorman, Guy, “Can France Stop Its Decline By Following Americas Lead?” 2005 Watching America. 12 Apr. 2006 < http://www.watchingamerica.com/lefigaro000031.html> Sennot, Charles M., “France gives critical look at its falling influence.” August 2004 Boston Globe 12 Apr. 2006 Read More
Share:
Tags
Cite this document
(“French History Essay Example | Topics and Well Written Essays - 500 words”, n.d.)
French History Essay Example | Topics and Well Written Essays - 500 words. Retrieved from https://studentshare.org/miscellaneous/1536580-french-history

CHECK THESE SAMPLES OF French History

The mosque is constructed in a four-iwan style. An iwan is a chamber-like structure. The four iwans face each other and form a rectangle so that the middle of the mosque is a large open-area courtyard. Undivided space encourages human interaction. Within each iwan, there are elaborate decorations to encourage prayer and worship. The decorative style is referred to as hypostyle. Through the centuries different groups have added structural supports, and decorative elements in accordance with the major architectural style of the time. This is true of other elements of the building, and it functions to give the building an entirely unique meaning. For instance, the walls are composed of varying types of brick designs, “some hist...
9 Pages(2250 words)Essay
sponsored ads
Save Your Time for More Important Things
Let us write or edit the essay on your topic "French History" with a personal 20% discount.
GRAB THE BEST PAPER

Let us find you another Essay on topic French History for FREE!