Comments (0)
Add to wishlistDelete from wishlist
Cite this document
Summary
Ever since Graham Bell invented the telephone, fixed line telephones were for general public use while handheld wireless sets were by and large, highly regulated for use by defence, police and emergency service personnel. All that has changed. Individual licensing or distance…
Download full paperFile format: .doc, available for editing
HIDE THIS PAPERGRAB THE BEST PAPER97.7% of users find it useful 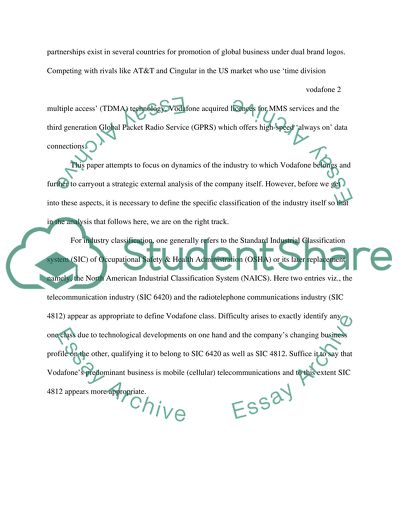 Assignment Ref. No: vodafone April 13, 2006. Vodafone Case Study: Strategic External Analysis and Industry Dynamics Introduction
Ever since Graham Bell invented the telephone, fixed line telephones were for general public use while handheld wireless sets were by and large, highly regulated for use by defence, police and emergency service personnel. All that has changed. Individual licensing or distance limitations have completely disappeared with the advent of new communication technologies. This has on the one hand, brought in new players into the market virtually spelling death-knell for fixed line operators overnight and on the other, created vast opportunities for business expansion across the world. In just twenty-two years since inception, the UK based Vodafone Group PLC has grown to become the world’s largest mobile communications company.
It is in the high growth frontline technology industry group with global perspective. Technologies commencing with voice communications over analog networks in the early eighties to paging, fax, data, SMS and other communications over digital networks, global systems for mobile telecommunications (GSM) with national and international roaming etc. and to today’s satellite mobile phone services are all in its portfolio. With a customer base of nearly 180 millions spread across five continents and dozens of countries, Vodafone is a giant in the industry. Consistent growth in business volumes and profitability are being achieved, year after year. It has built up its own brands or acquired other brands with unmatched zeal. Vodafone in Europe and Verizone Wireless, a partner, in the USA are well-recognised brands. Networking partnerships exist in several countries for promotion of global business under dual brand logos. Competing with rivals like AT&T and Cingular in the US market who use ‘time division
vodafone 2
multiple access’ (TDMA) technology, Vodafone acquired licences for MMS services and the third generation Global Packet Radio Service (GPRS) which offers high-speed ‘always on’ data connections.
This paper attempts to focus on dynamics of the industry to which Vodafone belongs and further to carryout a strategic external analysis of the company itself. However, before we get into these aspects, it is necessary to define the specific classification of the industry itself so that in the analysis that follows here, we are on the right track.
For industry classification, one generally refers to the Standard Industrial Classification system (SIC) of Occupational Safety & Health Administration (OSHA) or its later replacement namely, the North American Industrial Classification System (NAICS). Here two entries viz., the telecommunication industry (SIC 6420) and the radiotelephone communications industry (SIC 4812) appear as appropriate to define Vodafone class. Difficulty arises to exactly identify any one class due to technological developments on one hand and the company’s changing business profile on the other, qualifying it to belong to SIC 6420 as well as SIC 4812. Suffice it to say that Vodafone’s predominant business is mobile (cellular) telecommunications and to this extent SIC 4812 appears more appropriate.

“A Strategic External Analysis of a Company and Industry Dynamics Essay”, n.d. https://studentshare.org/miscellaneous/1536538-a-strategic-external-analysis-of-a-company-and-industry-dynamics.
Comments (0)
Click to create a comment or rate a document

... of the orders are being deferred or put off and cancelled as happened with the freighter version of the A 380. Another cause for worry is the fact that many of the customers are still cagey about ordering the Airbus A 380 and hence Airbus may have to ramp down its production and delivery schedule in the future. REGULATION Airbus has been in the news for its run-ins with the regulators like the WTO (World Trade Organisation) where the rival aircraft manufacturer, Boeing had field a case against the European Union for giving subsidies to the company illegally. Airbus responded with a counter petition asking the US government to stop preferential support to Boeing. As with any industry where there is a near monopoly by the lead players...
6 Pages(1500 words)Case Study

All these benefits get reflected in the result of employee job satisfaction. In Starbucks, the Employee Job Satisfaction rate is 82% as per the report of Hewitt Associates Starbucks Partner V...
6 Pages(1500 words)Assignment

Perhaps one of the most conspicuous aspects of CNN is that it has an excellent contact network and reporters on the spo...
8 Pages(2000 words)Case Study
sponsored ads
Save Your Time for More Important Things
Let us write or edit the essay on your topic "A strategic external analysis of a company and industry dynamics" with a personal 20% discount.
GRAB THE BEST PAPER

Let us find you another Essay on topic A strategic external analysis of a company and industry dynamics for FREE!