Comments (0)
Add to wishlistDelete from wishlist
Cite this document
Summary
Parkinson’s disease is a chronic progressive motor disorder, which gains its presence because of damage to the cells located in the basal ganglia of the brain. Thus, Parkinson’s disease can be considered to be a neurological disability. …
Download full paperFile format: .doc, available for editing
HIDE THIS PAPERGRAB THE BEST PAPER92.3% of users find it useful 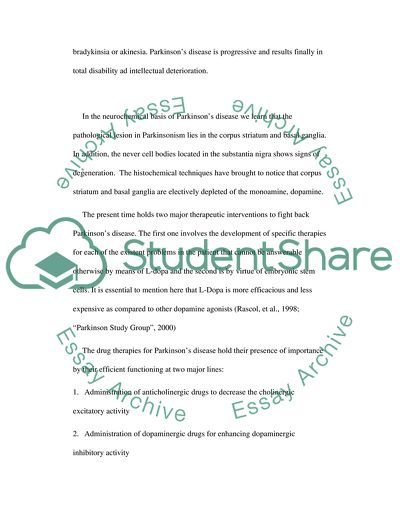 Download file to see previous pages In the neurochemical basis of Parkinson’s disease we learn that the pathological lesion in Parkinsonism lies in the corpus striatum and basal ganglia. In addition, the never cell bodies located in the substantia nigra shows signs of degeneration. The histochemical techniques have brought to notice that corpus striatum and basal ganglia are electively depleted of the monoamine, dopamine.
The present time holds two major therapeutic interventions to fight back Parkinson’s disease. The first one involves the development of specific therapies for each of the existent problems in the patient that cannot be answerable otherwise by means of L-dopa and the second is by virtue of embryonic stem cells. It is essential to mention here that L-Dopa is more efficacious and less expensive as compared to other dopamine agonists.
The drug therapies for Parkinson’s disease hold their presence of importance by their efficient functioning at two major lines:
1. Administration of anticholinergic drugs to decrease the cholinergic excitatory activity
2. Administration of dopaminergic drugs for enhancing dopaminergic inhibitory activity
...Download file to see next pagesRead More
Share:
Tags
Cite this document
(“The limitations of current therapeutic interventions for Parkinson Essay”, n.d.)
The limitations of current therapeutic interventions for Parkinson Essay. Retrieved from https://studentshare.org/miscellaneous/1535962-the-limitations-of-current-therapeutic-interventions-for-parkinson-disease

“The Limitations of Current Therapeutic Interventions for Parkinson Essay”, n.d. https://studentshare.org/miscellaneous/1535962-the-limitations-of-current-therapeutic-interventions-for-parkinson-disease.
Comments (0)
Click to create a comment or rate a document

An e-mail h...
13 Pages(3250 words)Assignment
sponsored ads
Save Your Time for More Important Things
Let us write or edit the essay on your topic "The limitations of current therapeutic interventions for Parkinson disease" with a personal 20% discount.
GRAB THE BEST PAPER

Let us find you another Essay on topic The limitations of current therapeutic interventions for Parkinson disease for FREE!