Written above the door of Platos academy was the inscription: Let no one unversed in geometry enter here. Why is mathematics so crucial for philosophical tra - Essay Example

Comments (0)
Add to wishlistDelete from wishlist
Cite this document
Summary
Plato – one of the most important educational theorists and curriculum developers in Western history, whose contribution to the theory and practice of mathematics education has had a profound impact over the ages, possessed educational interests and accomplishments founded on…
Download full paperFile format: .doc, available for editing
HIDE THIS PAPERGRAB THE BEST PAPER97.1% of users find it useful 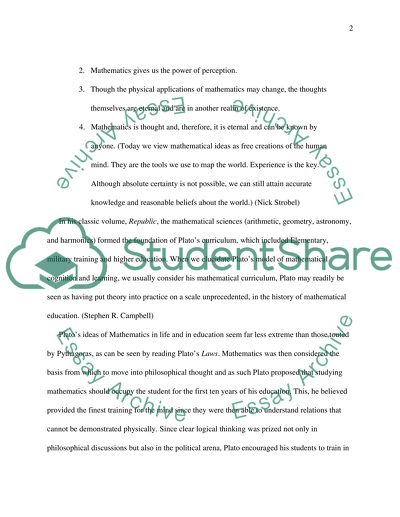 Extract of sample "Written above the door of Platos academy was the inscription: Let no one unversed in geometry enter here. Why is mathematics so crucial for philosophical tra"

Download file to see previous pages According to Plato there are absolute truths, mathematics is the key. While statements about the physical world will be relative to the individual and culture, mathematics is independent of those influences. Plato had Four Basic Points regarding mathematical applications:
4. Mathematics is thought and, therefore, it is eternal and can be known by anyone. (Today we view mathematical ideas as free creations of the human mind. They are the tools we use to map the world. Experience is the key. Although absolute certainty is not possible, we can still attain accurate knowledge and reasonable beliefs about the world.) (Nick Strobel)
In his classic volume, Republic, the mathematical sciences (arithmetic, geometry, astronomy, and harmonics) formed the foundation of Plato’s curriculum, which included Elementary, military training and higher education. When we elucidate Plato’s model of mathematical cognition and learning, we usually consider his mathematical curriculum, Plato may readily be seen as having put theory into practice on a scale unprecedented, in the history of mathematical education. (Stephen R. Campbell)
Plato’s ideas of Mathematics in life and in education seem far less extreme than those touted by Pythagoras, as can be seen by reading Plato’s Laws. Mathematics was then considered the basis from which to move into philosophical thought and as such Plato proposed that studying mathematics should occupy the student for the first ten years of his education. This, he believed provided the finest training for the mind since they were then able to understand relations that cannot be demonstrated physically. Since clear logical thinking was prized not only in philosophical discussions but also in the political arena, Plato encouraged his students to train in mathematics because he thought that it encouraged the most precise and definite kind of thinking of ...Download file to see next pagesRead More
Share:
Tags
Cite this document
(“Written above the door of Platos academy was the inscription: Let no Essay”, n.d.)
Retrieved from https://studentshare.org/miscellaneous/1535858-written-above-the-door-of-platos-academy-was-the-inscription-let-no-one-unversed-in-geometry-enter-here-why-is-mathematics-so-crucial-for-philosophical-tra

(Written above the Door of Platos Academy Was the Inscription: Let No Essay)
https://studentshare.org/miscellaneous/1535858-written-above-the-door-of-platos-academy-was-the-inscription-let-no-one-unversed-in-geometry-enter-here-why-is-mathematics-so-crucial-for-philosophical-tra.

“Written above the Door of Platos Academy Was the Inscription: Let No Essay”, n.d. https://studentshare.org/miscellaneous/1535858-written-above-the-door-of-platos-academy-was-the-inscription-let-no-one-unversed-in-geometry-enter-here-why-is-mathematics-so-crucial-for-philosophical-tra.
Comments (0)
Click to create a comment or rate a document

CHECK THESE SAMPLES OF Written above the door of Platos academy was the inscription: Let no one unversed in geometry enter here. Why is mathematics so crucial for philosophical tra

The term itself derives from an ancient Greek word that translates to “love of wisdom” (Wikipedia, 2005) and it is through several early Greek thinkers that we have arrived at the perceptions we now foster. One of the greatest of these thinkers was Plato, who built off of the ideas of Socrates and others before him and wrote his ideas down in book form for future generations to benefit. His writings have contributed significantly to three main areas of philosophy including metaphysics, epistemology, and ethics. In any of these fields, new work is generally founded upon, or based on, ideas that were first brought forward by Plato more than 2000 years ago. For this reason, it is justified to say that Plato is one of the...
12 Pages(3000 words)Case Study

During the last two decades, huge advances in computer technology for information and communication purposes have impacted all levels of education and many courses as well. Using technology to support the teaching of Mathematics generally started later than for other subjects. The first electronic machine used to assist in calculation however was not the computer but the calculator. In schools in the US, UK and some other countries, the calculator has been used since the early 1980s. Incidentally, before electronic calculators, there were mechanical calculators and even before that the slide rule to aid calculation. In US schools, for example, the calculator was used by students between the fourth and eighth grades although its ac...
7 Pages(1750 words)Case Study

In 1918, William Faulkner attempted to become a pilot for the U.S. Army but was turned down because of his height. He “never stood taller than five feet, six inches tall” (Padgett 1). He never gave up and traveled to Toronto, Canada where he posed as an English national and was admitted to the Royal Canadian Air Force (EGS 2). He then traveled to France with this force, though, when they reached France, the war had ended. (EGS 3)
From 1919 until 1921, after returning to the U.S, William Faulkner attended the University of Mississippi, where he wrote for the school’s newspaper, as well as his hometown’s newspaper. (EGS 3).He also drafted his first play that was presented by the university’s drama...
7 Pages(1750 words)Literature review
sponsored ads
Save Your Time for More Important Things
Let us write or edit the essay on your topic "Written above the door of Platos academy was the inscription: Let no one unversed in geometry enter here. Why is mathematics so crucial for philosophical tra" with a personal 20% discount.
GRAB THE BEST PAPER

Let us find you another Essay on topic Written above the door of Platos academy was the inscription: Let no one unversed in geometry enter here. Why is mathematics so crucial for philosophical tra for FREE!