Comments (0)
Add to wishlistDelete from wishlist
Cite this document
Summary
Common laws of England gives weight on the philosophy of the “Reasonable Man.” Since the introduction of the reasonable man into the criminal law division through Keating J when he said in the second half of the 19th century, in R. v Welsh, “ if there be any such…
Download full paperFile format: .doc, available for editing
HIDE THIS PAPERGRAB THE BEST PAPER93% of users find it useful 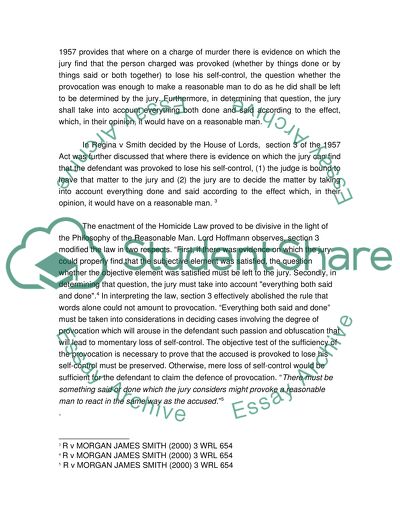 This follows the common law theory that cases that have a great deal of similarity should need to be dealt with similarly and decisions or court verdicts passed accordingly, although this may not be viewed as strict practice. Custom, as a historical source of law, could be said to be the legislative statutes or laws that need to be implemented from time to time, and could also be termed as statutory laws that monitor public conduct. Thus, it could be said that while regulatory laws are created and nurtured by legislations and regulations, through the executive powers enforced by executive branch agencies, this is done through the delegation of authority from the top downwards. However, in the case of common law or case law, decisi...
6 Pages(1500 words)Assignment
sponsored ads
Save Your Time for More Important Things
Let us write or edit the essay on your topic "Criminal Law Assignment" with a personal 20% discount.
GRAB THE BEST PAPER

Let us find you another Essay on topic Criminal Law Assignment for FREE!