Comments (0)
Add to wishlistDelete from wishlist
Cite this document
Summary
Perhaps by implementing Investors in People, the largest health club operator, which caters to people can also provide cater to their people (employee) and reach its objective more effectively. Hence, the focus of this project was to evaluate how the Investors in People…
Download full paperFile format: .doc, available for editing
HIDE THIS PAPERGRAB THE BEST PAPER92.1% of users find it useful 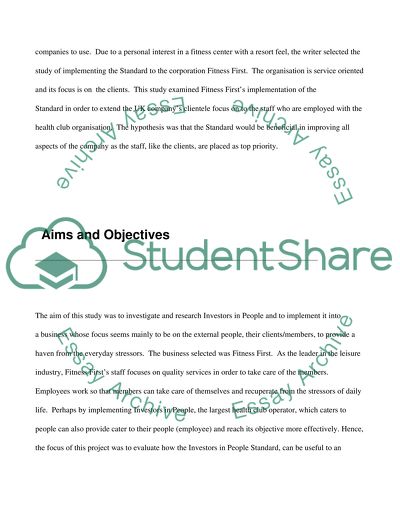 Download file to see previous pages The corporation’s entire staff, clients, and vendors were affected directly or indirectly when incorporating change.
Fitness First UK’s employees work hard in order that client scan recuperate from the stresses of daily life. Perhaps by implementing Investors in People, the largest health club organization, which caters to their external people (clients) can also provide cater to their internal people (employee) and reach its objective more effectively. Hence, the focus of this project was to evaluate how the Investors in People Standard, can be implemented the current policies of Fitness First UK.
The Investors in People Standard, or the Standard, provides a framework for organization to follow. However, the framework is kept open and flexible so that organisations can adjust and customize to meet its needs. Based on the actions of the planning cycle, the Standard’s guidelines are to Plan, Do, and Review. It is not strictly structured in order that organizations can implement the Standard in the way that is best. This makes sense and is highly effective because each organization and its people are extremely unique. Investors in People UK list their framework:
Scutt (1998) lists, “The current Director, John Layne, joined Airline Operations during 1994 and quickly identified the need to improve its business performance, customer service, and reduce costs. The Director was aware of the existence of Investors in People and saw it as the tool that would facilitate the implementation of a culture to achieve the required improvements…It was formally communicated throughout the function and gained very strong support from the Trade Unions.
Fitness First is the largest health club operator in the UK and Europe. Having grown from a single health club, twelve years later Fitness First has 1.2 million members in fifteen countries. There are 166 Fitness First clubs in the UK, which is the focus of this case study. They ...Download file to see next pagesRead More
Share:
Tags
Cite this document
(“Investigation of Investors in People in the UK Leisure Industry - Essay”, n.d.)
Investigation of Investors in People in the UK Leisure Industry - Essay. Retrieved from https://studentshare.org/miscellaneous/1535392-investigation-of-investors-in-people-in-the-uk-leisure-industry-using-fitness-first-as-a-case-study

“Investigation of Investors in People in the UK Leisure Industry - Essay”, n.d. https://studentshare.org/miscellaneous/1535392-investigation-of-investors-in-people-in-the-uk-leisure-industry-using-fitness-first-as-a-case-study.
Comments (0)
Click to create a comment or rate a document

In 2001 alone, the US reported earning from the industry close to two hundred billion US dollars. According to a previous study, the middle east tops the list as the largest exporters of crude oil taking over sixty-six percent of the global production of oil. Europe is the least producers of oil taking only two percent of the market share (Green, 4).
According to the American Association of Petroleum Geologists, the major problem facing the industry is lack of workforce and the increase in demand for oil. The report indicated that by 2030, the world’s oil demand is expected to increase from one hundred and three to one hundred and thirty million barrels per day. Natural gas, on the other hand, will expectedly increase t...
7 Pages(1750 words)Coursework
sponsored ads
Save Your Time for More Important Things
Let us write or edit the essay on your topic "Investigation of Investors in People in the UK Leisure Industry - Using Fitness First as a case study" with a personal 20% discount.
GRAB THE BEST PAPER

Let us find you another Essay on topic Investigation of Investors in People in the UK Leisure Industry - Using Fitness First as a case study for FREE!