Comments (0)
Add to wishlistDelete from wishlist
Cite this document
Summary
In the early 1990's Washington D.C. was known as the murder capital of the United States. This inglorious distinction was awarded to it because of the violent crimes that took place during that period. …
Download full paperFile format: .doc, available for editing
HIDE THIS PAPERGRAB THE BEST PAPER98.6% of users find it useful 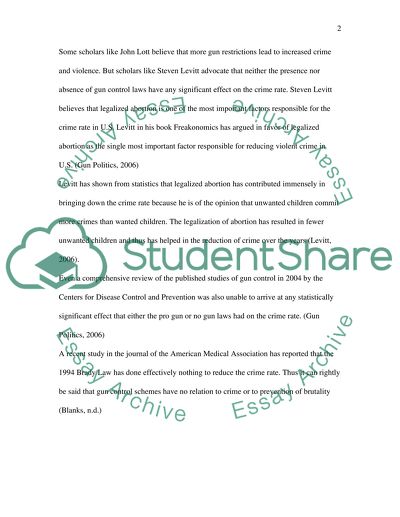 Extract of sample "Drugs and Economic Factors on crime"

Download file to see previous pages Pennsylvania in 2000 had approximately a population of 12,281,054. For the year 2000 the State of Pennsylvania had a total crime index of 2,995.3 reported incidents per 100,000 people. Pennsylvania had the 43rd highest total crime index. Pennsylvania had an incident rate of 420.0 per 100,000 people for offences which were violent in nature. The state was ranked as having the 23rd highest occurrence for violent crime among the states.
Washington D.C. unlike cities like Pennsylvania has very stringent gun restriction laws. These gun restrictions have not proved to be really effective. The crime rate of Washington D.C. is very high compared to the other neighboring states like Pennsylvania which do not have gun restriction laws. A review of the areas in the United States has shown that areas like Washington D.C., Chicago, New York which have the most regulative gun laws have the highest violent crime rate. Areas in the U.S. with have fewer gun control laws and higher gun ownership also surprisingly has the least crime rate
Some scholars like John Lott believe that more gun restrictions lead to increased crime and violence. But scholars like Steven Levitt advocate that neither the presence nor absence of gun control laws have any significant effect on the crime rate. Steven Levitt believes that legalized abortion is one of the most important factors responsible for the crime rate in U.S. Levitt in his book Freakonomics has argued in favor of legalized abortion as the single most important factor responsible for reducing violent crime in U.S.
...
Levitt has shown from statistics that legalized abortion has contributed immensely in bringing down the crime rate because he is of the opinion that unwanted children commit more crimes than wanted children. The legalization of abortion has resulted in fewer unwanted children and thus has helped in the reduction of crime over the years (Levitt, 2006).
Even a comprehensive review of the published studies of gun control in 2004 by the Centers for Disease Control and Prevention was also unable to arrive at any statistically significant effect that either the pro gun or no gun laws had on the crime rate. (Gun Politics, 2006)
A recent study in the journal of the American Medical Association has reported that the 1994 Brady Law has done effectively nothing to reduce the crime rate. Thus it can rightly be said that gun control schemes have no relation to crime or to prevention of brutality (Blanks, n.d.)
But the supporters of gun control believe that the crime rate can only be brought down through effective gun control. These supporters by believing so overlook the multifaceted factors responsible for crime and violence (Blanks, n.d.)
Thus it is a fallacy to suppose that gun control laws will help to reduce crime and violence in the United States. It is an erroneous belief because then the areas with most guns would not have had the least crime rates.
There are multiple factors responsible for crime and violence. If the crime rate has to be reduced then unlawful drug use and addiction, age demographics and poverty are the areas that have to be improved and worked upon. There are multiple population characteristics. Age is one of them.
It is widely believed that rising teenage population leads to increase in the crime rate. A separate juvenile justice system is gradually ...Download file to see next pagesRead More
Share:
Tags
Cite this document
(“Drugs and Economic Factors on crime Essay Example | Topics and Well Written Essays - 1500 words”, n.d.)
Retrieved from https://studentshare.org/miscellaneous/1534651-drugs-and-economic-factors-on-crime

CHECK THESE SAMPLES OF Drugs and Economic Factors on crime

...Topic: Drugs that bind DNA to treat diseases (selected disease: cancer) Part A- (word count excluding the three citations = 459 The following keywords and keyword combination were used to search for articles on drugs that bind DNA to treat diseases: “Drug-DNA interactions AND cancer;” “DNA binding AND anti-cancer drugs” 2. To find articles on the given topic, PubMed Central was selected as the database for the search. Pubmed Central (PMC) is a digital archive or electronic storage of biomedical and life science journals of the U.S. National Library of Medicine at the National Institutes of Health. It is a feature of the homepage of the National Center for Biotechnology Information (http://www.ncbi.nlm.nih.gov/). Pubmed Central has...
6 Pages(1500 words)Case Study

President Andrew Jackson led an example of an administration that set the stage for the way in which James Polk would lead. In 1817, as a still yet military leader, Jackson led the United States into the first of three conflicts with the Seminole Indians from which the acquisition of Florida from Spain would be negotiated and finalized. The situation with Spain was tenuous and should have been dealt with in a diplomatic and cautious manner, but in 1817 President Monroe wrote a letter to General Jackson stating that “Great interests...
8 Pages(2000 words)Article
sponsored ads
Save Your Time for More Important Things
Let us write or edit the essay on your topic "Drugs and Economic Factors on crime" with a personal 20% discount.
GRAB THE BEST PAPER

Let us find you another Essay on topic Drugs and Economic Factors on crime for FREE!