Comments (0)
Add to wishlistDelete from wishlist
Cite this document
Summary
As the population of the United States of America is increasing, so is the consumption of energy sources, for instance, electricity, fuel and so on. This ever-increasing consumption has led to what we call the energy crisis and the main cause for it is the immigration fueled population growth…
Download full paperFile format: .doc, available for editing
HIDE THIS PAPERGRAB THE BEST PAPER94% of users find it useful 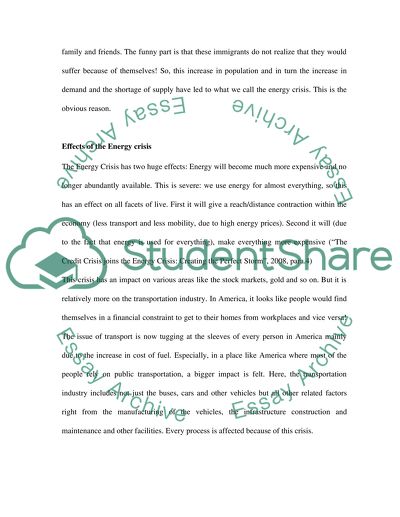 Download file to see previous pages Tremendous increase in the price of petrol and diesel and other fuel also has had an adverse impact on the transportation industry. This paper discusses the effects of the growing energy crisis on the transportation industry.
There are many causes for the increase in the consumption of energy and, as stated earlier, the main reason can be attributed the population explosion. Mass immigration is the driving force behind this unprecedented and environmentally damaging surge in our population ("Alert Archive", 2001, March). Supply of fuel is too less to meet the demands. This increase in demand is in turn due to the increase in the population. The United States of America is the dream land for many people outside America. People become ecstatic if they get an opportunity to live in the USA and settle down there with family and friends. The funny part is that these immigrants do not realize that they would suffer because of themselves! So, this increase in population and in turn the increase in demand and the shortage of supply have led to what we call the energy crisis. This is the obvious reason.
The Energy Crisis has two huge effects: Energy will become much more expensive and no longer abundantly available. This is severe: we use energy for almost everything, so this has an effect on all facets of live. First it will give a reach/distance contraction within the economy (less transport and less mobility, due to high energy prices). Second it will (due to the fact that energy is used for everything), make everything more expensive ("The Credit Crisis joins the Energy Crisis: Creating the Perfect Storm", 2008, para.4)
This crisis has an impact on various areas like the stock markets, gold and so on. But it is relatively more on the transportation industry. In America, it looks like people would find themselves in a financial constraint to get to their homes from workplaces and vice versa! The issue of transport is now tugging at the sleeves of every person in America mainly due to the increase in cost of fuel. Especially, in a place like America where most of the people rely on public transportation, a bigger impact is felt. Here, the transportation industry includes not just the buses, cars and other vehicles but all other related factors right from the manufacturing of the vehicles, the infrastructure construction and maintenance and other facilities. Every process is affected because of this crisis.
The transportation industry will suffer, because the consumption of energy is not restricted to refilling the fuel tank alone. There are many other areas where energy is consumed in various forms for different purposes. Some of them are stated below.
Vehicle manufacture, maintenance and disposal. The energy spent for manufacturing and recycling vehicles is a direct function of vehicle complexity, material used, fleet size and vehicle life cycle. (Rodrigue & Comtois, 2006)
Vehicle operation. Mainly involves energy used to provide momentum to vehicles, namely as fuels, as well as for intermodal operations. The fuel markets for transportation activities are significant. (Rodrigue & Comtois, 2006)
Infrastructure construction and maintenance. The building of roads, railways, bridges, tunnels, terminals, ports and airports and the provision of lighting and signaling equipment ...Download file to see next pagesRead More
Share:
Tags
Cite this document
(“American Consumers and the growing energy crisisThe Effects on Essay”, n.d.)
American Consumers and the growing energy crisisThe Effects on Essay. Retrieved from https://studentshare.org/miscellaneous/1534097-american-consumers-and-the-growing-energy-crisisthe-effects-on-transportation-industry

“American Consumers and the Growing Energy CrisisThe Effects on Essay”, n.d. https://studentshare.org/miscellaneous/1534097-american-consumers-and-the-growing-energy-crisisthe-effects-on-transportation-industry.
Comments (0)
Click to create a comment or rate a document

Green computing is the latest buzz in the world of computing in order to protect the globe from the lethal attack of global warming. We first have a look at the phenomenon of global warming. Global warming is a dramatic and unexpected surge in the temperature of the earth, which is a common abode for many different species and not just human beings...

Although walking is frequently dismissed as too easy or not difficult enough by fitness experts, the exercise itself bestows just as much benefit to the exerciser as jogging or running, with less of the jarring effects of more intense locomotion. This leads to a dramatically lower dropout rate of participants, meaning staying motivated is simpler on a walking regimen. Jogging, in contrast, requires additional effort without statistically significant improvements in time used in the workout, which leads to questions of whether walking or jogging is the more beneficial activity given the same resources. Based on the evidence that negates claims of an advantage for jogging, and evidence that jogging can lead to damage of body structu...
7 Pages(1750 words)Assignment

In 2001 alone, the US reported earning from the industry close to two hundred billion US dollars. According to a previous study, the middle east tops the list as the largest exporters of crude oil taking over sixty-six percent of the global production of oil. Europe is the least producers of oil taking only two percent of the market share (Green, 4).
According to the American Association of Petroleum Geologists, the major problem facing the industry is lack of workforce and the increase in demand for oil. The report indicated that by 2030, the world’s oil demand is expected to increase from one hundred and three to one hundred and thirty million barrels per day. Natural gas, on the other hand, will expectedly increase t...
7 Pages(1750 words)Coursework
sponsored ads
Save Your Time for More Important Things
Let us write or edit the essay on your topic "American Consumers and the growing energy crisisThe Effects on Transportation Industry" with a personal 20% discount.
GRAB THE BEST PAPER

Let us find you another Essay on topic American Consumers and the growing energy crisisThe Effects on Transportation Industry for FREE!