Comments (0)
Add to wishlistDelete from wishlist
Cite this document
Summary
The huge edifice of police set up in each country is built and run on taxpayer's money and as the stakeholders in the investment the citizens have every reason to expect the police to deliver goods. There are certain services, which are extremely complex in nature, and hence it is somewhat difficult to develop a formula that can be applied to evaluate their performance…
Download full paperFile format: .doc, available for editing
HIDE THIS PAPERGRAB THE BEST PAPER96% of users find it useful 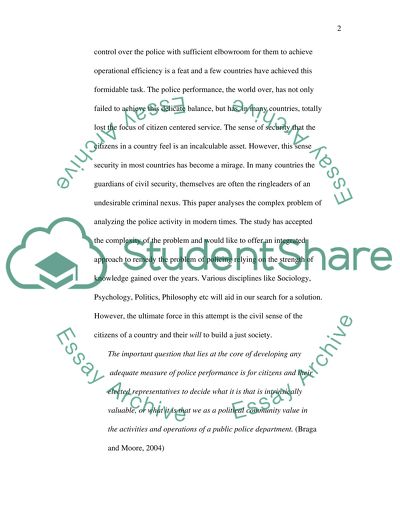 Extract of sample "Police as Crime-fighters"

Download file to see previous pages Absolute transparency in policing is a pipe dream and it might endanger the operational efficiency of the police. At the same time to leave, police activities totally unleashed can vitiate the very purpose of a police service. The task of combining the right degree of control over the police with sufficient elbowroom for them to achieve operational efficiency is a feat and a few countries have achieved this formidable task. The police performance, the world over, has not only failed to achieve this delicate balance, but has, in many countries, totally lost the focus of citizen centered service. The sense of security that the citizens in a country feel is an incalculable asset. However, this sense security in most countries has become a mirage. In many countries the guardians of civil security, themselves are often the ringleaders of an undesirable criminal nexus. This paper analyses the complex problem of analyzing the police activity in modern times. The study has accepted the complexity of the problem and would like to offer an integrated approach to remedy the problem of policing relying on the strength of knowledge gained over the years. Various disciplines like Sociology, Psychology, Politics, Philosophy etc will aid in our search for a solution. However, the ultimate force in this attempt is the civil sense of the citizens of a country and their will to build a just society.
The important question that lies at the core of developing any
adequate measure of police performance is for citizens and their
elected representatives to decide what it is that is intrinsically
valuable, or what it is that we as a political community value in
the activities and operations of a public police department. (Braga
and Moore, 2004)
The Historical Evolution of the Police Force
The idea of modern police force has evolved over many years. However the basic mission of the primitive police and the modern are the same, the mission of keeping public order by enforcing the rules of civil conduct has not changed much in the conceptual level. Like so many noble gifts to the world, the idea of modern police force is a British product. The man behind the organizational set up of modern police force is Sir Robert Peel, the founder and leader of the Conservative party. However, the idea of policing the country is somewhat old. The Praetorian Guard of ancient Rome is the rudimentary form of the modern police. The Romans achieved a sophisticated system of law enforcement. This remained in force until the disintegration of the empire.
With advent of Middle Ages and the manorial system, the policing job was the responsibility of the local nobles. The nobles appointed officials called the constables. They carried out the law. The constable's duties included arresting and keeping away forcefully the criminals. For a long time the constables were voluntary citizens, who were not paid anything. In the passage of time, this became burdensome. By the middle of 16th century, the rich citizens often sought the help of paid helpers. Soon this practice became widespread and the quality of policing by these constables came down.
The French Monarch King Louis XIV kept a small police group consisting of forty inspectors who ...Download file to see next pagesRead More
Share:
Tags
Cite this document
(“Police as Crime-fighters Essay Example | Topics and Well Written Essays - 4000 words”, n.d.)
Retrieved from https://studentshare.org/miscellaneous/1533938-police-as-crime-fighters

CHECK THESE SAMPLES OF Police as Crime-fighters

This department, in its mission statement, has declared that it is committed to improving the quality of the life of citizens, by having problem-solving partnerships with various communities, government agencies, and members of the community, so as to achieve a high degree of fairness, integrity, respect, transparency and equitable distribution o...

A’s office has always been that through fair and just administration enhancement of public safety can be achieved. Established on the philosophy that “A prosecutor’s office is to ensure justice and safety” It is from this that the Crime Strategies Unit (CSU) was created by D. A Vance in 2010 so as to target priority offenders and address crime issues by utilizing the collective resources of the D. A’s office, thus, developing and being able to implement strategies in an intelligence-driven prosecution (Manhattanda.org 2014).
The goal of the Crime Strategies Unit is to be able to foresee a crime before it happens and prevent it rather than after an arrest where D. A’s office prosecutes cases...
7 Pages(1750 words)Assignment
sponsored ads
Save Your Time for More Important Things
Let us write or edit the essay on your topic "Police as Crime-fighters" with a personal 20% discount.
GRAB THE BEST PAPER

Let us find you another Essay on topic Police as Crime-fighters for FREE!